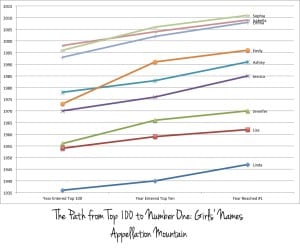 Earlier this month, the new US popularity data came out showing that Charlotte had entered the US Top Ten. It was a big week for the name, because just a few days earlier, we’d learned that Will and Kate had named their new princess Charlotte.

I’d predicted that Charlotte was a future #1 name in the US, sometime around 2033.

But will Charlotte really make it that high? And is that too far in the future? What does the trajectory really look like for #1 names for girls?

I went digging into the data, and the results have me rethinking my predictions!

Number One Names: An Overview

Because boys’ names are relatively stable, I decide to exclude them from this study. I also dropped Mary, since Mary was #1 way back in 1880, and we don’t know what her path to the top might have looked like.

That still leaves us with nine names that have ranked #1 for girls in the US from the twentieth century through today:

Some of these names had previously ranked in the Top 100, of course – but for our purposes, I’ve used the dates that led up to the name ranking #1.

So how long does it take a future #1 name to climb from relative obscurity to the top spot?

What does this mean? It suggests that if Charlotte reaches #1, it will be in either 2019 or 2020 – far earlier than my earlier prediction.

It’s also worth noting that names don’t go from #252 to #3. Yes, big jumps happen. But not blink-of-an-eye, meteoric-rise jumps.

Number One Names: How Long Can They Hold On?

How long do number one names hold the top spot?

This is the part where the crystal ball gets really foggy.

Linda and Jennifer held on for 15 years each; Emily, for a dozen. Lisa, Jessica, and Ashley held on for 8, 6, and 5 years, respectively.

But the latest round of number one names have short tenures. Emma peaked at #1, then immediately gave way to Isabella. Isabella held on for two years before being replaced by Sophia. And Sophia made it just three years before Emma reclaimed the title.

What does that mean? I suspect that the long reigns of number one names like Jennifer and Linda may be a thing of the past. Baby names generate lots of attention these days, and hearing that a name has reached #1 probably discourages at least some parents from using it. (Though there’s no reason to fear a very popular name!)

Plus, it takes many fewer births to make a #1 name. Back in the days of John and Mary, 5% of children might receive the #1 name. Noah was given to fewer than 1% of all boys born in 2014, and still stayed in the top spot. Emma was given to just 1.07% of girls, and ranked #1. That suggests greater volatility is likely.

So if Charlotte reaches #1 in 2019 or 2020, there’s almost no chance that the name will hold on until 2033 – despite the numbers that tell us that names have done so in the past.

Number One Names: What About Ava? 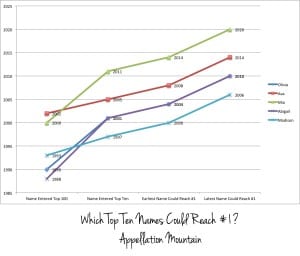 Do any of the other current Top Ten names have a chance of reaching #1?

We’ve already talked about Sophia, Isabella, Emily, Emma, and Charlotte. That leaves five current Top Ten names that have been number one names.

Do any of them have a chance?

It’s much tougher to think about what might happen with the fast-rising Top 100 names of the moment. A few that are interesting:

I’m tempted to put one of those mutual fund-style disclaimers on this whole post: Past performance is not indicative of future results. And yet the difference between Linda’s trajectory and the path followed by Sophia or Isabella isn’t so very different.

What do you think of these predictions? Do you think there’s more volatility in given names that there was ten years ago? Do you think Mia is a future #1?  Which of the current favorites will reach the Top Ten?