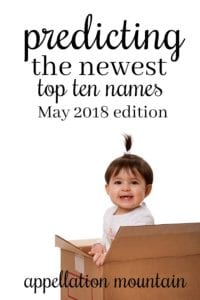 It’s time for Top Ten baby names predictions 2018. Because by this time tomorrow, the Social Security Administration will have released  It’s Christmas meets the Super Bowl meets my birthday.

No wait, it’s better than that. Because while all of those things are over in a matter of hours, the US Social Security Administration data release is the gift that keeps on giving. We’ll spend days combing through the data to tease out the trends that drive how we name children today.

I’ve made my predictions in two categories already:

But how about that elusive Top Ten? It’s been a snore the last few years, with relatively little change. And really, it’s pretty dull most years. Check out the Top Five names over the years, and marvel at how little changes.

Still, after a few years of steady Top Tens, would it be wrong to hope for a little bit of a shake-up?

Let’s start with my girls’ guesses.

The May 2017 data release gave us this list for all births January 1st through December 31st of 2016:

Ava and Charlotte both rose slightly; Emma, Olivia, Isabella, Mia, and Harper were flat. Sophia, Abigail, and Emily all fell slightly. But that obscures an intriguing fact.  In raw numbers of actual births, only Charlotte and Harper gained. The rest fell. So why wasn’t there more of a change in the Top Ten?

Simple. No other names gained enough to unseat them.

This year, I’m banking on Amelia and Evelyn to finally nudge their into the list, almost certainly at the expense of Abigail and Emily.

My guess for the new top ten girl names 2018 is as follows:

Now, to the boys!

The May 2017 data release gave us this list for all births January 1st through December 31st of 2016:

In terms of actual births recorded, Mason, Jacob, and Ethan all fell in fairly big numbers. Noah, Liam, William, and Michael fell, too, though not as dramatically. Elijah and Benjamin increased in use, while James was pretty much flat. But, as with the girls’ list, the absence of any really dramatic rising names meant that most of the Top Ten remained stable.

This year, I’m guessing that Oliver will make the cut, probably at the expense of Ethan.

My guess for the new top ten boy names 2018 is as follows:

For more insights and thoughts on my top ten baby name predictions 2018, tune in here:

What names are you watching? Do you have Top Ten Baby Names Predictions 2018 to share? Leave them in the comments!