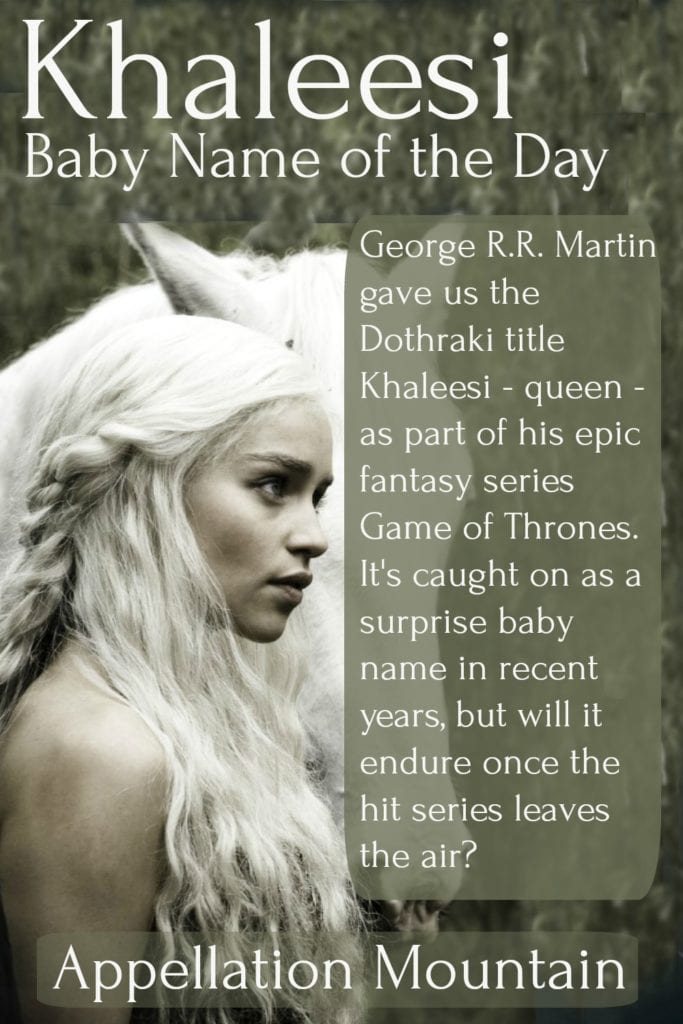 Khaleesi comes from Game of Thrones, a name that isn’t even a name – except now it has become one.

Our Baby Name of the Day celebrates the new season of the blockbuster series.

Daenerys Targaryen belongs to a powerful dynasty in Martin’s world, except they’ve lost their throne when the story starts. Daenerys is forced into marriage with a Dothraki warlord. Despite the inauspicious start, Daenerys comes to love her husband, and transforms from timid girl to capable – even ruthless – leader.

She’s also got a way with dragons.

When Daenerys married the warlord Drogo, she became the Khaleesi, the title given to the wife of the Khal. A Khal rules a clan, or a khalasar. It almost means queen – but there’s a cultural distinction that matters, especially to Daenerys.

After Drogo’s death, everyone expected Daenerys to retreat to the holy city, where former Khaleesi formed a council of respected women.

She rebelled, claimed the title of Khaleesi for her own, and formed her own khalasar. This involves more than a little bit of violence. But hey, we’re talking Game of Thrones here.

Will she reclaim the Iron Throne long held by her Targaryen ancestors? It’s too soon to say, but fans can’t wait to find out.

The series became an immediate smash hit for HBO.

Game of Thrones debuted in 2011, with Emilia Clarke starring as Daenerys. She’s won plenty of accolades for her work, including Emmy and Screen Actors Guild nominations.

Clarke is set to graduate from GoT to yet another beloved sci fi series. She’ll play Han Solo’s love interest in the next Star Wars spin-off, expected in 2018. She also starred in Me Before You, the adaptation of JoJo Moyes’ bestseller. Safe to say that Clarke’s star is on the rise.

Take a smash hit series with an appealing character played by a talented actor, and no surprise that parents might embrace the name. Only it’s not Daenerys that soared.

The title became one of the top girls’ name debuts of 2011. It took another year for Daenerys to make some noise.

This leaves us asking: what happens to this name after Game of Thrones ends?

After all, HBO has announced that the series will end after season eight. That means it leaves the air sometime after 2019. A final book or two might still linger after. And, of course, successful series never really die. Reboots and feature-length films and so on will likely remain rumored possibilities for years.

In order for Khaleesi to succeed post-series, parents will need to accept the name as more than the character. It happens all the time. Not every Luna was inspired by Harry Potter, and many moms of Arias have never watched Pretty Little Liars.

And yet, this title feels more closely tied to the series than either of those names. It’s possible we might have discovered Madison without Splash, Piper without Charmed and Orange is the New Black. But Khaleesi originates completely within the show.

I suspect that makes Khaleesi very much a 2010s – and maybe 2020s – name, the kind of choice that will remain on the edges of the mainstream.

But names can surprise, and since we’ll probably be reading Martin’s novels for generations to come, the name could filter into wider use.

What do you think? Will Khaleesi go mainstream? Or fade after the series leaves the screen?