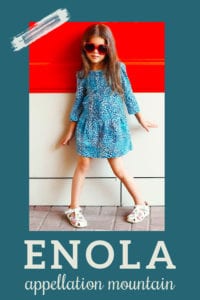 The baby name Enola started out as a literary invention, and fiction continues to keep this name in the spotlight.

Thanks to Dotmyiis for suggesting our Baby Name of the Day.

Back in 1886, author Mary Young Ridenbaugh used the name for her novel Enola; or, Her fatal mistake.

Ridenbaugh’s character, Enola Dale, spoke of her loneliness, musing that her parents “must have known of her future isolation” when they chose her name. The author clearly loved dramatic, one-of-one names. She called Enola’s children Alcia and Baring.

Enola wasn’t a stretch – and Ridenbaugh wasn’t the first to use it. Girl names ending with -ola were enjoying a burst of popularity in the 1880s. Viola, Lola, Leola, Nola, and just Ola were the Mia, Leah, and Thea of their day.

Sometime around 1883, Enola Miller was born in Pennsylvania. The surrounding town bears her name, and her historic home still stands. During her childhood, her father sold land to the railroad, which led to a rail yard named Enola, too.

So it’s not clear if the novel gets credit for the name’s rise – or if Ridenbaugh merely borrowed a rare, but on-trend name.

In 1890, Enola Gay Haggard was born in Iowa. She married Paul Tibbets in 1912, and a few years later, they welcomed a son. Paul Jr. grew up to be a pilot.

If you know your World War II history, this should all be falling into place by now.

Tibbets joined the US Air Force, and named his B-29 bomber after his mom. The Enola Gay would eventually drop the world’s first atomic bomb on Hiroshima, Japan.

It’s a heavy legacy for the name to carry.

In the immediate aftermath of World War II, the baby name Enola remained in sparing use, given to between a dozen and two dozen girls most years.

One possible reason? In 1953, the Enola Gay took its last flight, arriving at Andrews Air Force Base in Maryland.

The aircraft is now on display at the Smithsonian’s Udvar-Hazy Center in Virginia.

That might’ve been the end of the baby name Enola. It fell in use, and by the 1980s was given to fewer than five girls a year.

But in 1995, the big screen extravaganza Waterworld starred Kevin Costner as the Mariner, and a young Tina Majorino as Enola. It’s a post-apocalyptic vision of the future, where nearly everything is submerged – but Enola’s back is tattooed with a map leading to the last bit of actual above-water land on Earth.

In some ways, the movie was a spectacular failure – expensive, and nominated for half-a-dozen Golden Raspberry Awards. But it debuted at #1 in the US, and clearly was seen by plenty of people.

The name remained in sparing use, just a handful of girls every year. While -ola names remained mostly in style limbo, a few were heard, including Lola.

And fiction helped keep the name alive, too.

In 2015, horror flick Crimson Peak took us to turn-of-the-century America, where wealthy heiress Edith Cushing – played by Mia Wasikowska – falls for an Englishman with a title, a crumbling manor, and absolutely no money. She marries him – after all, he’s played by Tom Hiddleston – but you know it’s not going to end well. The creepy family mansion turns out to hold secrets, including the belongings of one of the Englishman’s former wives, Italian heiress Enola Sciotti.

So could it be Italian?

Names like Fabiola and Paola suggest that the -ola ending isn’t unknown. And there’s a town called Lenola in central Italy. But if it’s used as an Italian given name, it’s beyond rare.

As several commenters have noted, Enola has Native American roots, too. If this matches up with your family’s heritage, it might make the name even more appealing. However, there’s reason to be cautious when considering Native American names.

While the baby name Enola might mean solitary, thanks to popular use, it has a different origin and meaning in Native American languages.

The famous Cherokee Chief Black Fox, born in the 1740s, was also known as Enola, Enoli, or Inali. Inola, Oklahoma, outside of Tulsa, is named for him, and several places are called Black Fox in his memory.

But there’s only one reason we’re talking about this name now.

In 2006, author Nancy Springer gave the world Enola Eudoria Heddassa Holmes, (much) younger sister to Sherlock and Mycroft. The story sets her birth in 1874, making the name implausible but not impossible – certainly not for a family who named their boys Mycroft and Sherlock.

Enola’s mother disappears in the first book, and the girl detective is the one to crack the case.

The series is now up to six books, and Netflix has adapted two into movies, starring Millie Bobby Brown as the teenage sleuth.

Incidentally, the first Sherlock Holmes novel was published in 1887, the right time period for the appearance of the baby name Enola. The character tells us, though, that her mother chose Enola because it signals a solitary self-reliance that she hoped her daughter would possess.

The success of the first Netflix movie shifted the name’s image. Instead of the airplane and the pilot’s mom, or a broad sense of sadness, the baby name Enola now suggests a Han Solo-like independence.

What do you think of the baby name Enola? 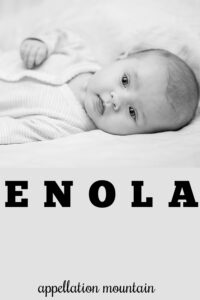 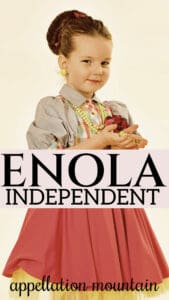