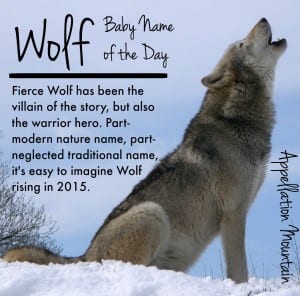 Looking for a boy’s name that is fierce – and yet wearable, too?

Thanks to Taylor for suggesting Wolf as our Baby Name of the Day.

Wolf comes directly from the Old English wolf. In Latin, the animal is lupus.

Wolves have long been feared by villagers and chased off by farmers. They’re the villain of fairytales and folk stories, from The Three Little Pigs to Peter and the Wolf to The Boy Who Cried … well, you get the idea.

They figure prominently in legend and myth. Romulus and Remus, the future founders of Rome, were raised by a she-wolf. The Norse god Odin kept two as pets, but Loki’s son Fenrir was a monstrous one. In some cultures, they’re destruction on four legs. In others, their fearlessness is admired.

Christianity sometimes equates wolves with the devil, but Saint Francis tamed one in an Italian village.

And then there are the werewolves, a concept dating to the 1400s and continuing right through Twilight and True Blood.

Fierce creatures often influence personal names, because we appreciate their strength and courage. Just like there are plenty of Leo names, we can find names like Wolfgang, Cynewulf, Ranulf, and Beowulf over the centuries. Surnames like Lowell and Lovett also refer to the animal.

The Hebrew name Ze’ev or Zev is yet another wolf name, and has seen some use in modern Israel.

It appears that Wolf started out as a nickname at least some of the time. This family tree includes men answering to Lupellus – little wolf – and Lupus as well as the surname de Lovel. But many of those given names have long histories of their won.

Wolfgang is probably the most familiar form of the name, thanks to notables like Mozart and Goethe.

There’s something fierce about Wolf, and yet this one feels quite wearable – maybe surprisingly so. Parents have embraced nature names, including other creature names, from Colt to Fox to Wren.

With ties to traditional names used over the centuries, no wonder Wolf feels like an undiscovered gem. And while Wolf and company remain under-the-radar, there are signs that these names may not remain rare for long.