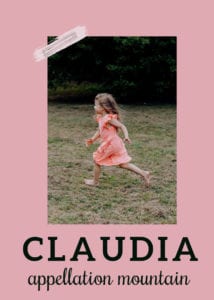 In honor of The Baby-Sitters Club arrival on Netflix, Claudia is our Baby Name of the Day.

This one comes straight from the ancient world. It’s the feminine form of Claudius, which means lame.

However, we remember Emperor Claudius as (mostly) capable. He expanded the empire into Britain and restored order after the chaotic reign of Caligula. Robert Graves’ twentieth century historical novels I, Claudius and Claudius the God shaped his legacy.

Plenty of women answered to the baby name Claudia in the ancient world. There’s a brief mention in the New Testament. The second pope, Linus, was the son of a Claudia – she became a saint. Pontius Pilate’s wife goes unnamed in the Bible, but Christian tradition often refers to her as Claudia. Various records mention a few other figures, including more saints.

Many names endured thanks to a popular saint, and Claudia is among them.

The seventh century Saint Claude was ordained a priest, served as an abbot, and then as Bishop of Besançon.

So it’s not surprising the name remained in use locally. But Claude also served as the feminine form of Claude, a unisex name ages before Riley and Jordan.

Queen Claude of France reigned in the 1510s and 20s, the wife of King Francis I. She appears in the first season of Showtime’s The Tudors. She was named for the French saint; and a small plum is called the Reine Claude in her memory.

Claude Debussy, the composer, and his wife, Emma, named their daughter Claude-Emma. So it remained unisex in France – and, in fact, still does today. (Though most French Claudes, male or female, qualify as senior citizens today.)

We hear Claudine and Claudie in use, too, over the years, and eventually Claudette, too.

In the Middle Ages, the Welsh name Gladys was frequently recorded in Latin as Claudia.

The masculine form Claud surfaces in sixteenth century Scotland, the name given to a member of the aristocratic Hamilton family. It might explain why names filtered into use in the English language by the late 1500s.

Credit probably goes to Rose Franken’s stories. They became radio program Claudia and David in 1941, a Broadway play, two movies, and a television series in 1952, plus books along the way.

Anne Rice gave the name to a little girl vampire in her 1976 novel Interview with the Vampire. She’s terrifying! In the fictional account, Claudia was born in late eighteenth century New Orleans.

It seems plausible – though US name data isn’t recorded until 1880.

When the book was adapted for the big screen in 1994, Kirsten Dunst played the child vampire. She earned a Golden Globe nomination for the role.

Along the way, famous Claudias also include:

Other fictional Claudias have appeared on television, including Dynasty, 24, Army Wives, General Hospital, and Primeval.

From 1986 to 2000, a generation of young readers grew up with The Baby-Sitters Club. Kristy, Mary Anne, Stacey, and Claudia were the core four.

Claudia Kishi is the vice president. How’s this for quaint? She’s the only one with a telephone in her bedroom, so she takes all the calls and relays messages to the other club members. In the new Netflix series, Momona Tamada plays Claudia.

Maybe it’s because of the steady use of the name, from antiquity to Claudia Schiffer. But it’s also accessible, thanks to fictional characters like Kishi and Kincaid. And despite all of these positive qualities, it ranks a relatively rare #872 as of 2018.

With history and strength, the baby name Claudia makes for a winning choice.

Would you consider the baby name Claudia for a daughter?