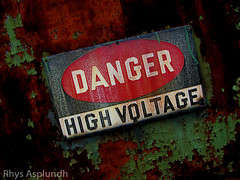 The middle name is a good place to go a little wild. With the exception of a passport and possibly a marriage certificate, we’re rarely required to reveal our full name as adults.

So if you give your kiddo the middle name Danger, it is usually up to him to reveal his extreme appellation, or to go through life pretending the D is for David.

Then again, he could grow up to be an X-Games athlete, or maybe an International Man of Mystery. Austin Powers, after all, claimed Danger as his middle name. (Though Mike Myers went ahead and called his new son Spike.) It isn’t just an urban legend – from twins in Australia who both share the menacing middle to Jakob Danger Armstrong, son of Green Day frontman Billie Joe, there are kids who do, indeed, have a built-in laugh line in the middle spot.

So let’s say you respect your partner’s longing for a daring, masculine middle – but want something slightly less cliched? Here are a few ideas.

Ace – The Hebrew Asa is right at home with other Old Testament appellations, but Ace conjures up daring fighter pilots and winning hands of cards. It’s a tough guy middle that would pair well with many a popular name.

Blaze – Blaise is saintly, but Blaze is fiery. He’s over-the-top, but in the middle spot, he stays just on the right side of outrageous.

Breaker – From Connor to Carter, ends in -r names have a high style quotient these days. Breaker, like Ryder or Ranger, boasts a modern masculine sound that could appeal. Just don’t complain when you have to move all of the Waterford out of reach.

Draco – As in Harry Potter’s nemesis, but also the constellation, borrowed from the Latin for dragon. Oh, and the seventh century BC Athenian lawgiver, known for replacing blood feuds with a written code of law. Danica McKellar used the name for her son earlier this year.

Harley – The iconic American motorcycle started out as the surname of one of the company’s co-founders. Despite some use for girls, it still revs the engine in the middle spot for a son.

Pendragon – While we’re breathing fire, there’s also Pendragon, sometimes used as a surname or epithet for the legendary King Arthur. Depending on the usage, it could mean “son of the dragon” or “dragon’s head.”

Tiberius – This sounds like a classic appellation borrowed from antiquity – and it is. But it also the middle name of Star Trek’s Captain James T. Kirk. If you love Atticus but he’s not on board, this might satisfy.

What other daring, dangerous names would you add to the list for boys?