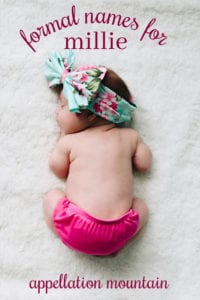 Take the popular Lily and add an M. Mix in our affection for names like Hattie and Sadie, and it is no surprise that Millie is catching on.

But does Millie require a formal name? And if so, which formal names for Millie are the most wearable?

Read on for some possibilities!

Formal Names for Millie: Most Popular

Amelia – As nickname potential goes, Amelia rivals even Elizabeth and Katherine.  There’s Mia and Amy and Mila, too. And why not Millie?  Along the same lines, Millie could be short for Amelie or Emilia, or even Emily. Amelia ranked #8 in 2018.

Camila, Camilla, Camille – There are other ends-in-mil names, but not all are English language-friendly. Ludmilla seems unlikely for an American playground. Camille and Camilla and Camila, on the other hand, have literary and mythological roots, as well as a stylish sound. If the sweetly vintage Millie doesn’t suit, boyish Cam is also available. Camila ranked #18 in the US in 2018.

Madelyn – I think Madeline visually looks like a formal name for Millie, but any spelling might work. Madelyn ranked #72 in the US in 2018.

Formal Names for Millie: Farther Up the Charts

Emmeline – The spelling isn’t exactly there, but the sounds suggest that Millie would work as a short form. Emmeline returned to the US Top 1000 for the first time in recent years in 2014. Emmalyn and Emmalynn consistently rank even higher.

Matilda – The obvious short forms are Mattie and Tillie, but Millie follows logically, too.  Given all of the girls answering to Maddie, going a different route makes sense.

Milagros – One of the titles of the Virgin Mary in Spanish is Our Lady of Miracles – Milagros. The first syllable makes Millie a potential nickname.

Milan – Looking for a place name possibility that’s less common than London? How about the unisex Milan, as in the Italian fashion capital, and a Slavic name from milu – dear.

Milana, Milania – Ready for two more names that currently rank in the 700s in the US? Milana and Milania are both gaining in use. Milania could come from the same root as Milan, or it might be yet another spin on Melanie/Melania/Milena. Milana has a similar story.

Milena – Cousin to popular Mila, Milena sounds like an elaboration, but has a history of independent use. Czech, Serbian, and Bulgarian offer similar names.

Amaryllis – A botanical route to Millie.

Melisande – The medieval Melisande is a big name for a small child, but Millie makes it quite wearable.

Mildred – Mildred seems dated. And yet, this nursery tour from Apartment Therapy makes me see Mildred with fresh eyes.

Milla – Milla serves as the simplest way to transform Millie into a slightly more formal name.

Miller – Millie softens up Miller, or any other surname with the syllable Mil.

Millicent – There’s something sweet and lady-like about Millicent, a name that conjures up images of little girls in spotless white pinafores.  Millie energizes the name. Millicent could be a successor to Abigail and Charlotte.

Wilhelmina – A regal, Germanic feminine form of the evergreen William, Wilhelmina screams to be shortened.  If Billie feels too boyish and Minnie too mouse, why not Millie?

What do you think of Millie? Which longer forms would you consider, or does Millie stand on her own? 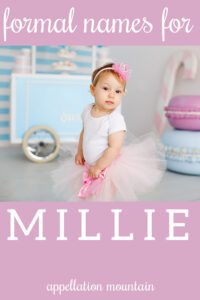