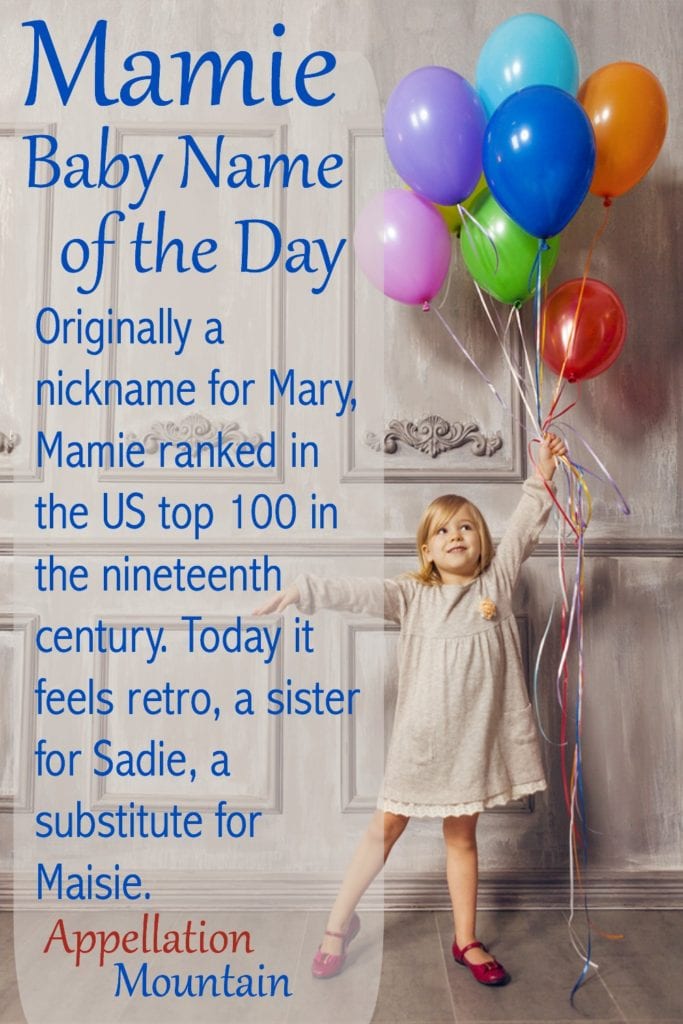 First came Sadie. Elsie and Maisie followed. Could this nickname name be next?

Thanks to Nat for suggesting Mamie as our Baby Name of the Day.

No surprise, then, that nicknames abound for both. The names even share a few nicknames, like Mae. Mamie belongs in that category, too.

A handful of women tie this name to the middle of the twentieth century.

It’s the given name of the landlady on 1990s sitcom 3rd Rock from the Sun and a BFF for Betty White’s character on Hot in Cleveland more recently. While the shows are more recent, the characters aren’t young.

Mamie: By the Numbers

Here’s the big surprise: look at the numbers, and it turns out that Mamie ranked in the US Top back in the nineteenth century! While the data is less reliable – adults self-reported when claiming social security numbers many years after their birth – it suggests that plenty of women were once given this name.

We’re not seeing a meaningful uptick in the name’s use for new births – at least not yet. Around two dozen girls have received the name every year for the last decade, with a high of 33 in 2005 and a low of 18 in 2007. Last year’s 22 seems just about right.

Meryl Streep named her daughter Mary Willa, but calls her Mamie. Now Miss Gummer has launched an acting career of her own.

It might make a great nickname for names starting with the May sound: Mabel or Mae, perhaps. And it substitutes for Sadie, Maisie, or many similar retro names that have garnered more attention in recent years.

Or perhaps other parents will follow Meryl’s example. This fantastic article from September 2015 profiles a mom who did just that.

She notes that some paused and asked if it like mammy, a variant of mommy-mummy used in some English-speaking countries to refer to moms. It’s also one that brings to mind Hattie McDaniel’s Oscar-winning turn as Scarlett O’Hara’s fiercely loyal mammy in Gone With the Wind. The latter association, with ties to slavery and racism, would make the name problematic.

Except it isn’t mammy at all. It’s may-mee. If Jamie and Amy can top the charts for girls, there’s no reason this name can’t return to its former well-used status.

What do you think of Mamie? Would you use it as a stand-alone name, or does it work better as a nickname?