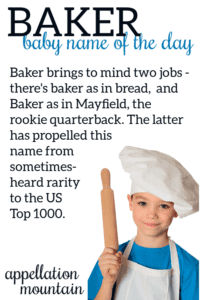 Baker sounds like a occupational surname, but the job that put this one on parents’ radar? Quarterback.

Our Baby Name of they Day comes from this list.

Quick: what does a Carter do? A Cooper? Many of the most popular occupational surnames don’t make for obvious job titles circa 2019. Even if we kinda-sorta can imagine Mason or Archer in action, it’s not necessarily in everyday use.

In Old English, bæcere referred to one who bakes bread.

Not only do we use it as a job title and a hobby still, but it appears in plenty of phrases. A baker’s dozen means thirteen, or a bonus; half-baked means incomplete; while baked in means already included in the plan.

Like nearly any surname, it’s been handed down at least some of the time. A dozen here, seven or so there, appear throughout much of the twentieth century.

The name leaps in the 1990s and early 2000s, the age of Tyler and Dylan, Cameron and Hunter. But that still translates to just 25 or 50 births, give or take.

Parents don’t hear this as a name until a very specific person comes along: Baker Mayfield.

Born in Texas in 1995, the football player’s name sounds like it must come from his family tree. Not so. His dad, James Mayfield, also played football, and had a teammate named Baker back in the day. It wasn’t an honor name, exactly – just an unusual choice that had never been forgotten. His mom, Gina, loved the idea of naming their second son Baker, but James wasn’t so sure. They compromised: if she chose the first, he’d choose the middle. And so Baker Reagan – as in the 40th president – was named.

He walked on to the Texas Tech football team, and, after a teammate was injured, became starting quarterback as a freshman. Mayfield later transferred to the University of Oklahoma, and earned the Heisman Trophy in 2017. Along the way, his name became familiar to college football fans. That’s because his transfer triggered a host of questions about eligibility and scholarships, and his appeal to the National Collegiate Athletic Association resulted in the Baker Mayfield Rule.

But all the winning games, the new records, and that trophy? That jump-started interest in the name for certain.

Mayfield became the #1 pick in the 2018 draft, and went to play for the Cleveland Browns. He excelled again; he currently holds the record for most passing touchdowns by a rookie quarterback.

He’s also courted controversy – an arrest for disorderly conduct, a reputation for carrying a chip on his shoulder.

And yet, he’s a phenomenal athlete.

Here’s the thing about this name: it checks all the boxes.

It picks up from Hunter and Carter, with that -r ending. It shares the same bright ‘a’ of yet another occupational surname name: Mason. It’s a strong sound, and yet Baker comes across as softer than, say, Ryker or Cannon.

It also brings to mind another quarterback surname name: Brady. Tom Brady played his first game for the New England Patriots in 2000. Unlike Mayfield, he wasn’t a college phenom, and there were other reasons parents had shortlisted this more-familiar boy name.

But by 2006, after three Super Bowl starts, the name Brady had entered the US Top 100. A star athlete can impact the trajectory of a name, taking it from rising favorite to The Next Big Thing.

Could Baker be the next Brady? It’s too soon to say – on and off the field – but the name shows tremendous promise.

What do you think of Baker? Would you name a child after a professional athlete? 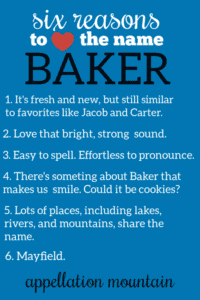