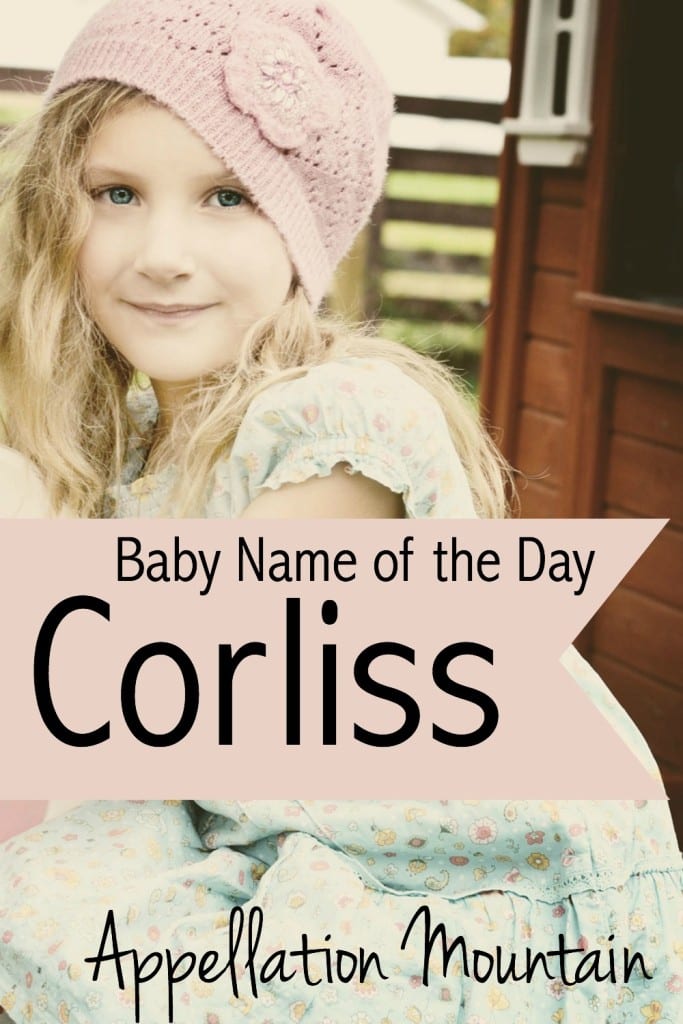 Corliss could be a cousin to Cora, a mix between that vintage name and more modern choices like Collins.

Thanks to Renee for suggesting our Baby Name of the Day.

Cora comes from the Greek kore – maiden. That makes it part of a fashionable group of names for girls, including Cordelia and Coraline.

But Corliss has entirely different roots. It’s from the Old English carleas – care plus without, so the name means carefree, or maybe even cheerful. (It just about fits on this list!)

The meaning is almost certainly the reason it was given to a famous fictional character.

In January 1943, radio audiences first tuned into Meet Corliss Archer. Miss Archer was an outgoing and upbeat fifteen year old. It ran for thirteen years on radio, and was eventually adapted for movies and television, too.

Corliss: By the Numbers

Between 1944 and 1956, the name appeared on the fringes of the US Top 1000, all thanks to the various iterations of Miss Archer.

The name fell quickly as the series left television. By 1960, there were just 75 girls with the name. And by 1980, there were a mere fifteen newborn girls called Corliss.

That means that modern parents might know this name best as a surname, thanks to:

It’s also been used as a masculine given name. My favorite is C.C. Moseley – Corliss Champion Moseley, an early aviator, World War I fighter pilot, and organizer of both the United States Army Air Service schools and Western Air Express, the forerunner of Western Airlines.

In the mid-1990s there was a tiny uptick in the name’s use for boys. This might be thanks to basketball player Corliss Williamson, who led the Arizona Razorbacks to their only NCAA National Championship in 1994.

But it would fit well with current trends in girls’ names. It combines the stylish Cor- sound with a tailored ending. If we’re naming our daughter Collins, why not Corliss?

Of course, the same is true for boys. With names like Brooks and Miles trending, it’s perfectly reasonable to imagine this name catching on for boys – even though recent usage and pop culture tend to give this one to the girls.

What do you think of Corliss? Do you like it better for a son or a daughter?