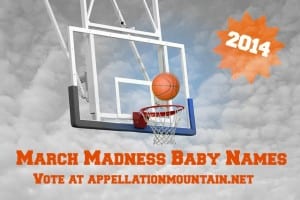 The votes are in, and the baby names of the year are decided!

If you’ve been following the voting, you probably already know which names were victorious.  But let’s take a look back at the elite group of names they’ll join:

How have these names trended in real life?  In some ways it is difficult to say – because of the lag in Social Security Administration data, the most current year we can compare is 2012.  Still, we can see hints and patterns.  Let’s take a look:

Louisa remains outside the US Top 1000 as of 2012’s data, but is definitely seeing an increase in use.  Nathaniel is her opposite – he was solidly established by the time 2011 March Madness launched, and continues to be heavily used, though he’s declining in the rankings.

This time you chose the safer name for girls.  Genevieve had climbed quickly coming into 2012, while Arthur was just starting to emerge from style limbo.  My guess is that we’ll see some positive motion for him when the 2013 stats are released.  But for now, the numbers don’t demonstrate his growing appeal.

Of course, the voters in March Madness aren’t all American – or even English-speaking!  Isla has long been a mega-hit outside of the US, but she’s a recent arrival on our shores.  No matter, though – even the 2012 data shows that Isla was spiking.  The same is true of Archer.  He’s another undeniably ahead-of-the-curve choice for a boy.

Bragging rights for 2014 go to Cora and Everett!

Hello, Downton Abbey effect. The gorgeous, gracious Duchess of Grantham helped accelerate a Cora revival.  Make no mistake, this vintage gem was already staging a comeback when the show debuted in 2010.  But she nearly double in use – from 1200 girls in 2010 to over 2000 in 2012.  Cora is a cousin for past winners Louisa, Archer, and Isla – names that are going places.

As for Everett, he’s not quite as closely tied to a single figure, but he’s climbing quickly, too, up to #214 in 2012, from #586 in 2000.  Sure, there have been a handful of high profile uses – like George Clooney’s character in O, Brother Where Art Thou?  But that was back in 2000.  Everett owes his success to sound – that great opening Ev, the tt ending.

This year’s victors?  Definitely names with history and stories aplenty, but also not names that we’ve been hearing until relatively recent years.  It’s a winning combination – obviously!