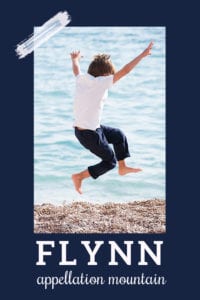 We’re living in the age of Finn.

It’s tough to nail down the exact popularity of Finn. There’s just Finn, plus Finnegan, Finley, Griffin, Phinnaeus – choose your spelling! – Finbar, Fintan, Finnick, and more. Nearly all of them are sometimes shortened to Finn, and a few of them are heard for girls, too.

Flynn, on the other hand, seems far more straightforward. It’s spelled just the one way, and ranked a solid, but not-too-common #779 as of 2018.

Both names come from Ireland. Finn is a legendary hero.

But Flynn started out as a surname, something like Ó Flainn or Ó Floinn. It means, roughly, descended from Flann – a ninth century High King of Ireland.

And Flann, of course, means red.

Just Flann is sometimes heard in Ireland. There’s a twentieth century author. Another Flann from the same era advocated for the use of the Irish language. In the US, Flann sounds too close to dessert. Literary Flannery seems more promising, though the author Flannery O’Connor puts the surname in the same category as Harper.

Plenty of people answer to the surname, including actors, athletes, and musicians.

If you know your Phineas and Ferb, it’s the family’s surname.

And the Flynn Effect was identified by researcher James R. Flynn. (It refers to the tendency of IQ test scores to rise over time.)

Born in Tasmania, the son of an academic, Errol Flynn became one of Hollywood’s brightest stars in the 1930s. He headlined swashbuckling adventures like The Adventures of Robin Hood. Flynn’s characters always saved the day and got the girl.

While Errol is reserved for Wizarding World owls these days, Flynn still retains much of the actor’s bravado and style.

Then along came Tangled, Disney’s 2010 reboot of the Rapunzel story.

And it is a reboot – maybe even a reinvention. Rapunzel doesn’t just let down her hair. She wields a mean frying pan, and does an awful lot of the saving herself.

As for her dashing prince? He arrives with a name that screams action hero: Flynn Rider. Only he’s a thief, not a noble knight. And it takes some arm-twisting by Rapunzel to set their adventure in motion.

And, happily – because it is still a fairy tale – a good guy after all.

But the fact that Flynn chose the name as his alias? It signals that we’re right to perceive it as adventurous and handsome. The writers intentionally chose it in homage to Errol Flynn.

Tangled succeeded at the box office, and inspired a 2017 Disney Channel original series. Though now, Flynn is a reformed thief, husband to Rapunzel … and known as Eugene.

In 2011, Miranda Kerr and Orlando Bloom – no stranger to swashbuckling himself – named their son Flynn.

The combined attention helped push this handsome Irish name into the US Top 1000. But while Finn names have soared, the baby name Flynn has remained nicely under the radar.

All of this makes it a handsome Irish heritage pick that could suit a boy born today nicely.

Would you consider the baby name Flynn?