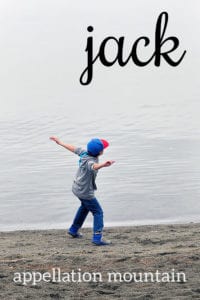 There’s no Jack in the Bible.

Instead, it’s John. Forms of the name are found in the Old Testament. Then there’s John the Baptist and John the Apostle in the New Testament. So famous was he that the name appears in nearly every language. Millions of men have shared some form of the name over the years.

It comes form a Hebrew name meaning “God is gracious.”

John flourished in the east first, the name of eight Byzantine emperors. But the Crusaders brought it back with them. By the twelfth century, it was became one of the most popular given names in all of Europe.

Besides the emperors, there have been kings of nine different countries and 21 popes John. There’s a notable John – or three – in nearly any field of endeavor.

With so many men sharing a name, nicknames developed out of necessity.

John and Johan became Hankin and Jankin and even Jackin, before eventually dropping the ‘in’ ending.

Adding -kin created lots of common diminutive forms in Medieval English, making it easy for a name to pick up a k sound – think of all those Hopkins, descended from ancestral Roberts.

So while it seems odd to our ear today, it’s very clear how we got from A to B.

So common was the name, that it served as an everyman name. An average Joe.

Or not so average, because plenty of Jacks went on adventures in nursery rhymes and folktales.

Sure, he sold a cow for magic beans … but we also outwits a Giant and pulls out a plum. He frosts the windows on winter mornings, and leaps over candlesticks.

OUT OF JOHN’S SHADOW

Dozens and dozens of famous men answered to Jack in the twentieth century. Most of them started out as John. Think actor John Joseph Nicholson. Or comedian Thomas Jacob Black. Musician John Anthony White. The list goes on and on.

Jack lagged slightly behind. Usually in the US Top 100, and sometimes as high as the Top 20, it never out-ranked the original.

But now? John stands at #27, after falling for many years. And Jack? It’s reached #28, after almost as many years of climbing.

At #17, Jackson outranks them both.

Some of Jack’s rise reflects parents’ willingness to skip the formal name. But it’s more than that.

And then consider the action heroes.

There’s Tom Clancy’s Jack Ryan, immortalized in over a dozen novels, plus movies, and now an Amazon original series.

Ray Charles, The Who, and Billy Joel have all recorded songs about Jacks.

This Is Us gets credit for the most memorable television Jack of the moment, but Revenge, Bones, Alias, Lost, Will & Grace, Law & Order, Stargate and more have all embraced the name.

Jack proves that a name can feel traditional and stylish. It’s friendly on a child, confidence-inspiring on an adult. If classic-but-current is your vibe, then Jack belongs on your short list.

And while it’s not quite at a saturation point in the US, it’s worth noting that the name is even more popular elsewhere in the English-speaking world. 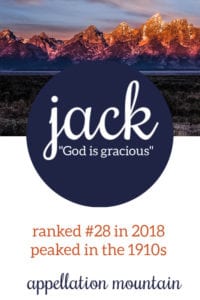