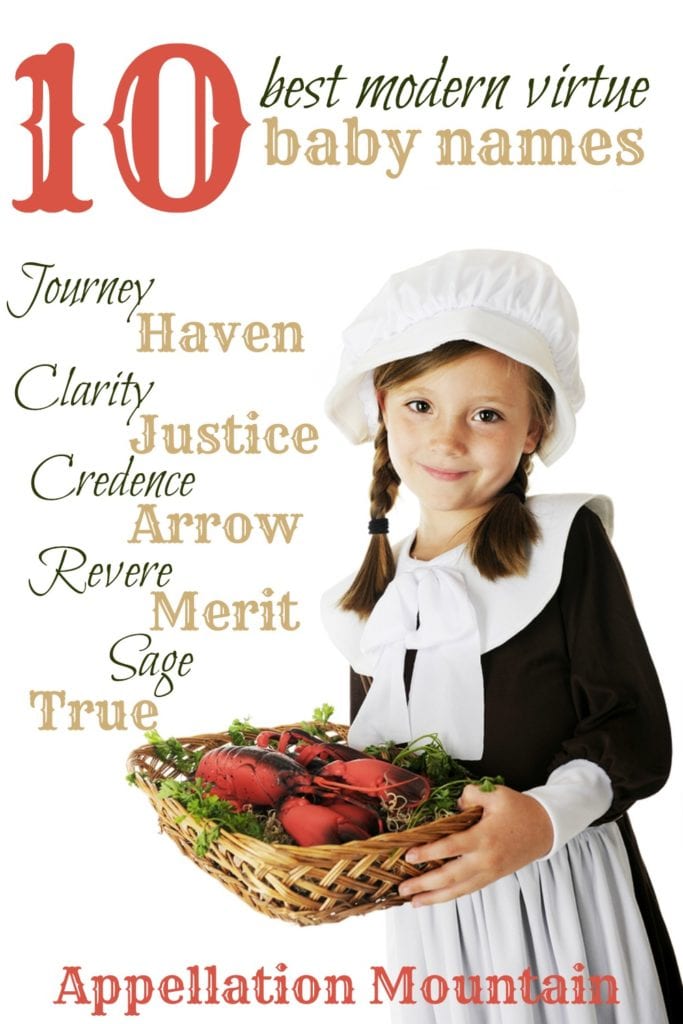 There’s something about modern virtue names. Some of the would have felt right at home on Plymouth Rock. Others reflect values or word choices that would feel utterly foreign to those first American settlers.

For this list, I focused on names that might wear well as firsts or middles, and names that could be unisex – even if their current use is not. And yet, the list feels somewhat arbitrary. If I’d searched for a few more hours, it might be twice as long! So please share your favorites in the comments.

In honor of Thanksgiving 2016, let’s take a look at ten of the best modern virtue names.

Let’s start out with some modern virtue names currently charting in the US Top 1000.

Haven – Haven came to wider notice thanks to Jessica Alba’s younger daughter, born in 2011. Haven has ranked in the girls’ Top 1000 since the 1990s. Credit the stylish sound – we love Ava, as well as tailored H names for girls. It currently ranks #330 in the US. As for boys, Angelina Jolie’s brother, sometimes actor James Haven, comes to mind.

Journey – At #274 for girls in the US, Journey makes for a fairly mainstream pick. It’s heard occasionally for boys, too, as with Megan Fox and Brian Austin Green’s youngest son, Journey River, born in August 2016. 1980s rock band Journey makes this musical, but the idea of journey as discovery – and thus a modern virtue – probably motivates more parents.

Justice – An undeniable virtue name, Justice entered the US Top 1000 for boys and girls alike in the 1990s. It’s seen sparing use for boys at least back to the nineteenth century, possibly thanks to several saints Justus. Today, it appears in the girls’ Top 500, and just outside the boys’ Top 500.

Sage –  Depending on your perspective, Sage is either a nature name, from the herb. Or it could be among the modern virtue names, since it also means wise. Ancient Greece gave us the Seven Sages, philosophers and statesmen known for their thoughtful counsel. Like Justice, Sage has appeared in both the girls’ and boys’ Top 1000 since the 1990s. Today it is about twice as popular for girls, but rising for both. Alternate spelling Saige – in the mode of Paige – is also seen, mostly for girls.

Some great options exist beyond the US Top 1000, too.

Arrow – An arrow hits its mark, linking the name Arrow to achievement. While it would not have been considered a virtue name in the strictest Grace/Faith/Mercy sense, it’s at home in this company. The sound is also quite stylish, what with the o-ending. 94 boys and 60 girls were given the name last year, so Arrow is definitely going places. Another name with a similar vibe? Celebrity favorite Rocket.

Credence – A troubled character in Fantastic Beasts and Where to Find Them, Credence makes for an intriguing virtue name. It feels antique, a sibling for Prudence or Constance. And I did find some in the US Census Records. But it’s quite rare, and also has a sort of crunchy, 1960s-era feel thanks to rock band Creedence Clearwater Revival. (Nope, that’s not a typo – the band spelled it with two Es.)

Clarity – Love three-syllable names for girls like Everly and Romilly? Clarity might belong on your list. It takes classic Clara and Claire in a more obviously modern virtue names direction, though they all share the same roots: the Latin clarus, clear.

Merit – Spell it Marit, and this is a Scandi spin on Margaret. And Merritt comes from an English surname with no ties to the word. But Merit – this spelling – makes a modern virtue pick, ultimately derived from a Latin word meaning “to earn.”

Revere – Revere drips with Colonial cool, thanks to American Revolutionary War hero Paul Revere. It could fit right in with Americana names for boys. But the name’s appeal goes beyond the historical figure. While the word originally meant to fear, today the meaning is closer to respect, making it a brother for August. While I think this works better for boys, it might work for girls, too.

True – We’ve seen Truman and Truett in use for boys. Truely and Truly are sometimes heard for girls. But how ’bout just True? As in true blue and all things simple and honest. It was given to 38 girls and 56 boys last year, making it unusual, but not unknown.

Those are my ten best modern virtue names. Do you like any of these? What would make your list?