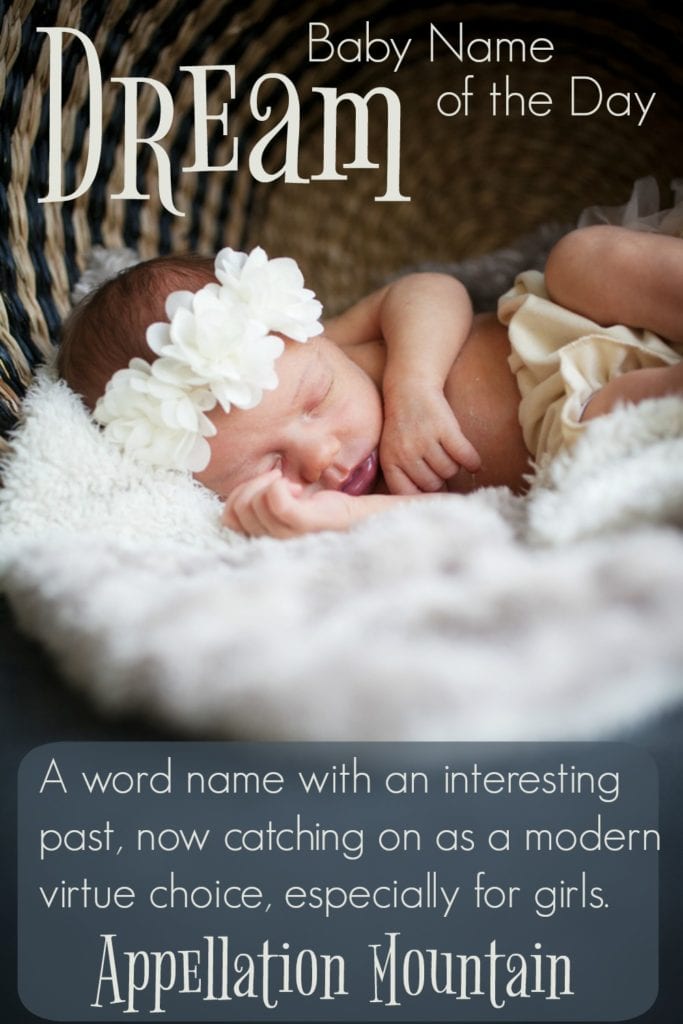 Celebrity baby names week continues with the name of the newest Kardashian cousin.

Today we think of dreams as pleasant, or possibly aspirational. Life is but a …, all you have to do is …, hold on tight to your …

But history tells a different story. Remember in Shakespeare’s Hamlet, the near-mad prince says, “to sleep, perchance to dream …” in his soliloquy about suicide. It makes for a moodier take on the word than we sometimes hear today.

Of course, Mercutio told us “that dreamers often lie” in his long, rambling jest about Queen Mab in Romeo and Juliet. And, on a very different note, the word refers to a light-hearted fantasy in A Midsummer Night’s Dream.

So which is it?

The origins are tangled. In Old Norse, draumr and related words meant merriment or noise. In Old English, the sense was closer to illusion or even trickery – Mercutio’s take on the word. But it could also mean joy, which is closer to Midsummer’s Night. And it might trace all the way back to a word meaning to deceive or seek to harm – edging closer to Hamlet’s take.

By the 1200s, the word referred to the images, sensations, and feelings of a sleeping person. It wasn’t until the 1800s that it could also mean charming or beautiful. And it’s been barely a century that the word could also signify the ideal.

Once the word carried the meaning of ideal, it turned into a potential virtue name – a sister for Hope.

A handful of celebrities have used the name:

Why does it lean feminine? Hard to say, but it’s worth noting that Drema and Dreama boast a long, if sparing, history of use as feminine names. Both spellings date to the early twentieth century, and could be related to our nighttime imaginings … or not.

Dream: Not Quite a Name

Even as more children receive the name, some of the most prominent uses aren’t innocent.

Neil Gaiman’s The Sandman comic book series features a character by the name. He keeps company with Destiny, Death, Desire, Despair, and more. He’s also known as Morpheus. The series has succeeded beyond most comic books, and takes the name in a different direction.

Picasso painted Le Rêve in 1932; it translates to The Dream.

And, of course, we’ve been interpreting dreams since before Sigmund Freud – and especially after.

All of this adds layers of complexity to the newest Kardashian baby’s name. And yet, I suspect it will be received as a simple, straightforward twenty-first century noun name, something like Skye or Blue.

Because the name was rising before this celebrity birth announcement, it’s possible that it will continue to catch on. But it’s equally possible that the Kardashian association makes for a mixed reaction – and some daring parents who might have considered Dream will settle on another modern virtue name instead.

What do you think of this baby name? Would you consider it for a child?