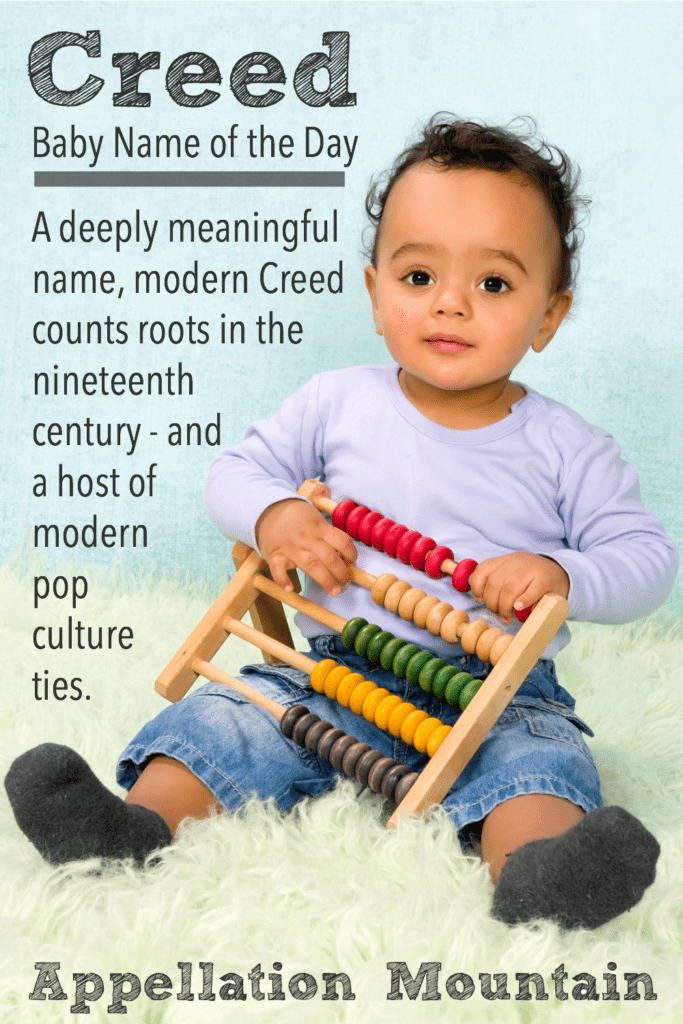 The Latin credo means I believe. By the 1600s or so, it referred to a statement of belief.

Christianity claims several creeds: the Apostles, the Nicene. During worship, the congregation professes their faith, beginning with the words, “I believe.” Today they might feel routine, but when they were written, their words addressed key theological debates of the day.

No question that this one qualifies as a virtue name.

When it appears as a surname, however, it has little to do with spirituality.

Instead, it’s the Anglicized version of several Gaelic surnames, all related to the personal name Crìodán – meaning unknown. Or maybe it comes from Old English, in which case it might refer to crede – weeds, or a place name, or even a long-lost given name.

Cornwall gives us a (female) Saint Crida, from the fifth century, also known as St. Cride or Creed.

Creed: By the Numbers

The name appears in small number for years, enough to keep it on the fringes of the Top 1000 during the late nineteenth century.

From the 1930s into the 1990s, about a dozen boys received the name every year. Then the slow rise started. What explains it?

Florida-formed rock band Creed formed in 1993. They hit it big later that decade, into the early 2000s. The religious name may come from lead singer Scott Stapp, stepson to a Pentecostal minister.

Let’s stick with music for a minute.

Born William Charles Schneider, the musician known as Creed Bratton became a member of The Grass Roots. He played on their 1967 anthem, “Let’s Live for Today.”

Bratton left the band in 1969, but a new generation knows him for another reason. He played a fictional version of himself on NBC’s The Office.

The actor and the character share the same name, along with plenty of biographical details. The television version leans darker – he slacks and lies and generally causes havoc, but mostly remains well-liked.

In the same area, the video game world gave us Assassin’s Creed. Debuted in 2007, the series currently ranks as one of the best-selling video game franchises of all time.

The game features assassins who, despite their name, serve as the good guys. They time-travel to save the world.

But that’s not the movie that explains the name’s entry into the Top 1000.

Carl Weathers played Apollo Creed in the Rocky movies. Rocky comes into their fights an unknown underdog, while Apollo is a Muhammad Ali-like champion.

The two eventually become friends, but despite the character’s long run, his surname inspired few – if any – parents during the era.

Rocky movie number 7 introduces Adonis Creed, the illegitimate son of Apollo, never introduced in the earlier films. Adonis wants to follow in his father’s footsteps, and Rocky serves as his mentor.

Michael B. Jordan played the young boxer, generating lots of positive buzz. Sylvester Stallone even earned a Golden Globe, plus an Oscar nomination, for returning to the big screen as Rocky.

The name plays a critical part, too. When we first meet him, Adonis prefers his mother’s surname, Johnson. By the end, he’s embraced his heritage.

Creed: By the Numbers

That represents a massive bump. Names often climb slow and steady, at least until they reach the rankings. It represents a perfect storm: an on-trend, meaning-rich name that parents have slowly warmed to by hearing it steadily used.

The stars aligned with the well-received movie and the emphasis on the name – from the plot to the title.

It makes a great choice for parents seeking a substantial, but modern, surname-style choice.

What do you think of Creed? Do you imagine this name will continue to rise?