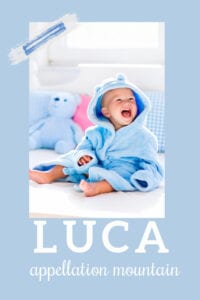 Thanks to Jenna for suggesting our Baby Name of the Day.

JOSHUA and NOAH and EZRA

Not so long ago, boy names ending in vowels were rare. Immigrants to the US adopted more American versions of their names. Giorgio became George: Roberto, Bob. In 1959, the only vowel-ending boy names you might encounter were y-enders. Think Timothy and Gary. If you count nicknames, like Joe, they’re a little more common – but only a little.

But mostly, boy names just plain didn’t end with a.

It’s not like Joshua is novel. In the Old Testament, Joshua accompanied Moses to Mount Sinai to receive the Ten Commandments.

That’s the textbook definition of an old-school name.

But Joshua debuted in the US Top 100 in 1971, and cracked the Top Ten in 1979, paving the way for another generation of Biblical boy names – especially those ending with a.

Noah followed. So did Elijah, Isaiah, and Ezra. Over a generation, we became accustomed to boy names ending with the vowel sound.

As we embraced vowel-ending boy names, it seemed far more reasonable to use romance language names for our sons in their original forms.

Saintly, enduring Luke has never left the US Top 1000, and it’s been a Top 100 fixture since 1992. The slightly less common Lucas has still appeared in the Top 100 non-stop since 1993 and has featured in the Top Ten over the last few years.

The baby name Luca is simply the Italian form of Luke and Lucas. There’s the sculptor, Luca della Robia. Mario Puzo used it for a tough guy in his 1972 novel The Godfather. Plenty of contemporary athletes and other figures answer to the name, too.

It’s heard in Italy and much of Europe, as well as throughout Latin America.

Suzanne Vega sang about a boy named Luka in her 1987 song. “Luka” dealt with child abuse. Despite the dark topic, it became one of Vega’s biggest hits.

That means the average parent today grew up knowing the name.

As for the ‘k’ spelling, it’s the default in several Slavic languages. When George Clooney left ER, Croatian-born Goran Visnjic was hired to pick up the scalpel. He played Dr. Luka Kovac for a decade, from 1999 to 2009. There’s also a minor character from long-running supernatural series The Vampire Diaries named Luka Martin.

Suzanne Vega says that she chose Luka for her fictional child because it’s universal.

That’s true – add up the ‘c’ and ‘k’ spellings, and the baby name Luca is heard across many languages and cultures. Mostly it’s masculine, but not exclusively. (In Hungarian, for example, it’s the equivalent of Lucia.)

Actor Colin Firth and his Italian wife, director Livia Giuggioli, gave the name to a son, a brother for Matteo. Celebrity chef and television host Tom Colicchio has sons Dante, Luka, and Mateo. Other celebs with sons by the name include Hilary Duff, Jacinda Barrett & Gabriel Macht, and designer Rebecca Minkoff. None other than Audrey Hepburn paved the way. The Hollywood icon welcomed her son Luca in 1970, with Italian husband Andrea Dotti.

The baby name Luca could get another big boost in the summer of 2021.

Disney/Pixar’s Luca will debut on Disney Plus in June 2021. It’s the story of two boys enjoying a gelato-filled summer in a coastal Italian town – except they have a secret to keep, too. The title comes from the main character’s name. His sidekick is the equally Italian Alberto, and the girl they befriend is Giulia.

Luca marks the twenty-fourth feature film for Pixar. Their earlier movies have helped launch Arlo, Dash, and Remy, so the baby name Luca could easily get a boost from this summer release.

If you’re looking for a pan-global name that spans multiple languages and feels cool and current in English, then the baby name Luca could belong on your list.

What do you think of the baby name Luca? 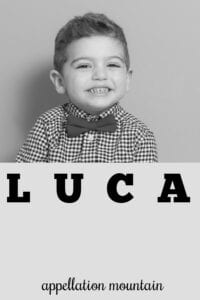