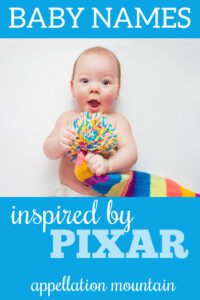 Pixar baby names come from the movies the game-changing studio has produced since its founding in 1986.

The names on this list belong to the twenty-first century, meaning that they’re all Disney-Pixar baby names, from movies that debuted after the long-time storytelling giant paired up with the innovative new studio.

Some have clearly influenced parents; others played a small part in the rise of a popular name. And a few have yet to catch on – but could be the next big thing.

Turning Red, the twenty-fifth feature-length film from the studio, debuted in early 2022.

In the meantime, let’s take a look at ten Pixar baby names we’re hearing on the playgrounds – and a few that could be next.

What would you name a friendly apatosaurus? Disney-Pixar went with Arlo for 2015’s The Good Dinosaur. While it wasn’t a mega-hit like many a Pixar movie, it helped the already-rising Arlo climb in use. Credit also goes to the name’s friendly, upbeat sound, an alternative to other popular picks like Milo and Leo. But the timing suggests that the adventures of Arlo, and his eventual transformation from the runt of the litter to selfless hero – played a part, too.

Toy Story kick-started Pixar’s reign as a movie-making giant. But the names of the original movie’s characters, like Woody and Buzz, haven’t caught on – yet. But how ’bout Bonnie? In Toy Story 3, she’s the young girl who rescues Woody while the rest of the toys end up at Sunnyside Daycare. After much adventure, most of the toys make a new home with Bonnie. The 2010 movie bumped the sweet vintage nickname in use a bit, bringing it back into the US Top 1000. Toy Story 4 debuted in 2019, adding more to the story of Bonnie and her toys.

Coco centers around Dia de Muertos – a Mexican holiday related to All Saints’ Day – and a young boy’s dreams of becoming a musician. The boy is named Miguel; Coco is his great-grandmother. While Coco plays a critical role in the story. In fact, it’s her story that ultimately explains much of Miguel’s family history. The name has gained steadily in use, and we do love our girl names ending in -o. Call Coco one to watch in the coming years – in 2020, it was given to 100 girls in a single year for the first time ever.

In 2004, we met The Incredibles, a family of former superhero parents, and kids who didn’t know they weren’t regular kids. In the movie, Dash is the fast-moving middle child and his full name is Dashiell. But just Dash ranks in the current US Top 1000, a former rarity that rose sharply following the movie’s 2004 release. Some of it has to do with our affection for word names, and some of it is down to sound – Cash and Nash also feature in the US Top 1000, along with Asher and Ashton. But the numbers show that Pixar played a part, too.

Ellie ranked in the US Top 200 before we ever met the curmudgeonly Carl of Up and his beloved, adventurous wife. Given the popularity of so many El- names, it’s tough to attribute the rise in Ellie solely to the 2009 Pixar film. And yet, there’s no question Ellie gained in use, doubling from 2008 to 2014. The movie details the love story between Carl and Ellie Fredricksen, and while it is sad, it’s also deeply moving. The character’s name came from director Pete Docter’s daughter – who voiced the daring child Ellie in the movie. In her case, it’s short for Elizabeth.

Finding Dory brought back many of our favorite Finding Nemo characters, but we also met plenty of new aquatic friends. Hank reluctantly helps Dory when she arrives at the Marine Life Institute. He’s an octopus – or maybe a septopus, as he’s missing a tentacle. Hank is kind of a grouch, but he helps Dory escape, and eventually reunite with her family and friends on the reef – and then joins them in the ocean. The name enjoyed a tiny boost from the movie’s success, but it’s tough to gauge. Why? Hank is often short for the mega-popular Henry, and the data on how many Henrys are sometimes Hank doesn’t exist.

Inside Out debuted in the summer of 2015, and we all fell in love with Joy, the emotion at the center of young Riley’s brain. Voiced by Amy Poehler, the movie tells the story of Riley’s move from Minnesota to San Francisco, and her struggles to grow up and find her place in her new hometown. Along with Up, it’s one of the more emotional of the Disney-Pixar movies, and one that seems less likely to inspire sequels and spin-offs. But it has encouraged parents to embrace Pixar baby names. Already popular Riley rocketed up the charts, reaching the Top 25, following Inside Out’s release. And Joy briefly rose in use, too. Though for now, this brief and upbeat name remains quietly underused.

The Italian form of classic and enduring Luke, Luca has been gaining in use for years. That’s down to our love of vowel-ending names for boys. Just ask the parents of Elijah and Noah, Mateo and Giovanni, Dakota and Kai. Names that once felt a little too different are now exactly different enough. But it’s possible that a recent Disney-Pixar character will this name a boost. 2021’s Luca introduced us to a timid, 12 year old sea monster, dreaming of life on land.

Turning Red introduces us to Mei, a 13 year old girl with a very unusual reaction to strong emotions. She transforms into a red panda. Turns out the panda-transformation glitch is a family heirloom of sorts. Mei is pronounced like Mae, but it’s not related. The character is Chinese-Canadian, and her name means beautiful. Well, actually, her full name is Meilin Lee, and the compound name can have multiple meanings.

In 2007, we met Remy, a rat who loved great food. The star of Ratatouille seems like strange inspiration for a child’s name, but there’s no question about the link. Seldom heard in the US prior to 2007, it rose steadily for boys and girls following the movie’s release. Remy brought along longer names, too, like surname name Remington. While there’s no talk of a Ratatouille sequel, a new ride recently opened at Walt Disney World’s Epcot, modeled on a popular attraction at Disneyland Paris. At this point, Remy has momentum beyond the Pixar character.

1930s favorite Sally usually brings to mind another animated character: Charlie Brown’s little sister. But in 2006’s Cars, we met Sally, a blue Porsche. She’s a lawyer who left behind Los Angeles to settle in sleepy Radiator Springs, where she operates the Cozy Cone Motel. (And, of course, eventually helps Lightning McQueen find his way to true greatness.) She’s loyal, fearless, and very smart. So far, the movie hasn’t increased the name’s use – but she’d make a great role model. If you love Molly and Sadie, but want something less popular, Sally belongs on your list.

Monsters, Inc. featured just one human character – a girl called Boo. But it also starred John Goodman as a furry blue monster known by the very human name James P. Sullivan. Most of his fellow monsters, including BFF Mike Wazowski, call him Sulley. The movie debuted in 2004, just two years after Sullivan entered the US Top 1000. Since then, we’ve enjoyed 2013 prequel Monsters University, again featuring Sulley – and the name has gained in use. Credit goes to our preference for longer boy names, but also – at least in part – to the Pixar flicks.

What are your favorite Pixar baby names? Would you consider any of these for a child? What would you add to the list? 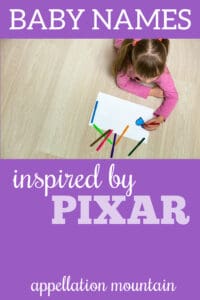