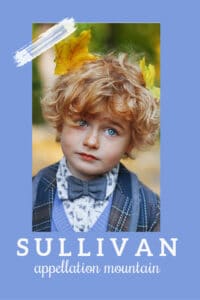 The baby name Sullivan started out as an Irish surname.

But it comes from a given name – Suileabhain.

The first syllable means eye; the middle is dark; and the final element is a diminutive, meaning little. Put it all together, and it means “little dark eye.” Presumably, it might have been given to someone with dark eyes, just like people with brown hair ended up answering to Brown.

In any case, the name’s Gaelic origins are clear, and it reads like an import from Ireland.

Musical theater fans might think of The Pirates of Penzance or The Mikado or any of the tremendously popular Victorian-era comic operas.

That’s thanks to dramatist W.S. Gilbert and composer Arthur Sullivan. The duo, known as Gilbert and Sullivan, collaborated on fourteen works between 1871 and 1896.

Many are still performed – and beloved – today.

And then there’s Ed Sullivan.

Long before there was MTV, musicians clamored to perform on The Ed Sullivan Show. The longest running variety show in television history, it debuted in 1948 and ran through 1971. For more than one generation, it was the place to hear emerging artists.

But it wasn’t just music. It showcased all types of performers, including jazz, classical music, and comedians. And Sullivan was also notable for his openness. At a time when mainstream television routinely discriminated, Sullivan insisted on booking talent, regardless of race or religion.

While the legendary television host passed away in 1974, the concept of the show – and the title – appear in countless movies and other television shows about the era.

Still, it’s not Ed Sullivan than this generation of parents – or kids – will think of first.

That distinction likely belongs to a hairy blue monster at the heart of Pixar’s 2001 film Monsters, Inc., as well as the 2013 prequel, Monsters University.

At the heart of both stories is a pair of best friends. Mike Wazowksi, voiced by Billy Crystal, is a one-eyed green ball with legs. James P. Sullivan, called Sulley, is big and blue.

Monsters University tells the story of how they became best friends. Monsters, Inc. is all about their work at Monstropolis’ power plant.

Chances are you know the story – monsters used to scare children; the kids’ screams powered everything in the monster world. But through a series of misadventures, Mike and Sulley discover than children’s laughter is even more potent … and everything changes.

Disney-Pixar movies can be incredibly influential, particularly when it comes to boys’ names. Just ask Arlo, Dash, and Luca, and yes, Sullivan.

In the same era that Sulley was busy being big and blue, a heroic Sully captured the public’s imagination.

Chesley “Sully” Sullenberger was piloting US Airways Flight 1549 when it was forced to make an emergency water landing on the Hudson River. All 155 people aboard survived. The 2016 movie about it was titled Sully: Miracle on the Hudson.

If the nickname Sully felt lightweight thanks to the animated character, the pilot’s heroism shifted the name’s image.

The baby name Sullivan returned to the US Top 1000 popular names for boys in 2002.

Monsters, Inc. gets credit. But the Irish name had quietly been gaining in use since the 1990s.

In fact, the surname appeared in the US Top 1000 a few times during the nineteenth century.

It fits with surname names for boys, as well as our ongoing love of Irish names. A handful of celebrity babies, like Patrick Dempsey’s son, born in 2007,  as well as fictional characters, like Third Watch’s John “Sully” Sullivan, boosted the name’s profile along the way.

All combined, the baby name Sullivan projects warmth and constancy. It’s the kind of name that sounds adorable and friendly on a small child; respectable and strong on an adult.

With generations of grown men answering to names like Ryan and Aiden, Sullivan feels like the logical next name in that series.

What do you think of the baby name Sullivan?

Originally published on January 3, 2011, this post was revised substantially and re-published on November 8, 2022. 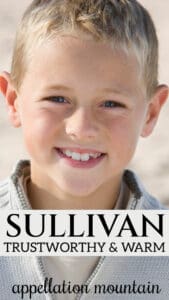 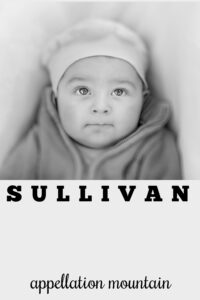