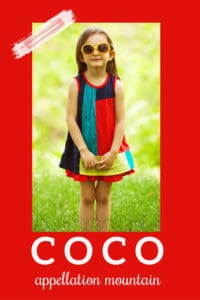 Sparky and sweet, the baby name Coco started out as a nickname, but now stands on its own.

Let’s start with cocoa, as in the cocoa bean, the source of chocolate, as well as the warm drink.

This gets a little twisty.

In Spanish (and Portuguese) coco means palm tree. In Nahuatl, the language spoken by the Aztecs, the word cacaua refers to the bean of the cocoa tree, the source of chocolate. Cacaua became cacao in Spanish, and then, eventually cocoa in English.

It’s possible that a typo in the 1775 edition of Johnson’s Dictionary cemented the change from cacoa to cocoa in English.

In any case, the word cocoa has been with us for centuries.

As a given name, though, it’s tough to find the first use of the baby name Coco.

At least some of the time, it was used as a diminutive of the female name Socorro.

It means relief in Spanish, from the name María del Socorro – a title for the Virgin Mary.

That makes this a deeply spiritual name – Mary of Perpetual Succour.

Marian names have been used in Spanish for generations.

That’s two possible origins for the baby name Coco, but chances are that no one would be choosing the name for their daughters, if not for Gabrielle Chanel.

Born in a charity hospital, Gabrielle’s family was desperately poor. She spent the latter part of her childhood in an orphanage, where she was trained as a seamstress.

After leaving, she attempted to earn a living as a cabaret singer. There’s a popular story that her nickname comes from a song she used to sign, but Chanel herself said it came from the word coquette – flirt – or possibly from a childhood nickname from her father.

What we do know is that starting with hats, then moving on to perfume, and eventually her own couture house, Chanel’s mark in fashion history is almost impossible to understate.

And yet, it’s tough to reconcile Chanel’s impressive rise from poverty to household name with her personal beliefs. During the Nazi occupation of Paris, she associated freely with German leadership. More recent scholarship revealed that she freely expressed antisemitic opinions.

It makes the name challenging. On the one hand, Coco Chanel established herself as an icon long before her personal beliefs came to light. Stars from Katharine Hepburn to Audrey Tatou have brought her to life on screen, and Keira Knightley is the face of Chanel perfumes. And yet, now that we know them, it’s impossible to look away.

And yet, the baby name Coco remains very usable.

Probably because parents slowly embraced the name, beginning in the 1970s.

The name slowly faded. A new generation didn’t automatically think of the French fashion designer Coco Chanel, a woman and business owner. It became a brand.

Coco, on the other hand, failed to chart until the 1970s. In 1972, five children received the girl’s name Coco for the first time, putting in on the US Social Security Administration’s list.

Then along came the daughter of Courtney Cox and David Arquette. The Friends alum named her daughter Coco Riley, thanks to a childhood nickname Cox earned from her first and last names. That was 2004, when Coco still qualified as an extreme celebrity baby name.

As of 2021, 94 girls received the name. That’s still far from common, but it’s not nearly as surprising as it once was.

Plenty of male Cocos emerged in the same era, including:

In the US, it’s not used as a given name for boys – at least, not in big numbers. But elsewhere in the world, Coco can read male.

But the highest profile Coco of them all is probably Cori “Coco” Gauff, a teenage tennis phenom. Gauff has already won singles and doubles titles aplenty, setting records for doing so at a young age.

Combined with the 2017 Disney-Pixar movie, it’s easy to think of Coco as a cozy, culture-spanning choice.

It feels like Coco is catching on, but it’s tough to say. A great many Cocos have another name on their birth certificates.

Some possibilities include Colette, Corinne, Cordelia, and names with the initials C.C., to name just a few.

Whether the baby name Coco is used as an affectionate nickname or a formal name, there’s something about it that just says effortless cool.

It fits in with popular girls’ names ending with O, from Willow to Harlow. But it also blends in with casual names for our daughters, like Sadie and Birdie, Sky and Liv.

Even though Gabrielle Chanel is a problematic namesake, Coco has long since evolved beyond any single figure to be a name that marries a sparky, current sound with plenty of enduring style.

What do you think of the baby name Coco? 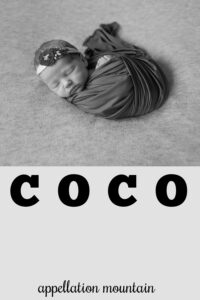 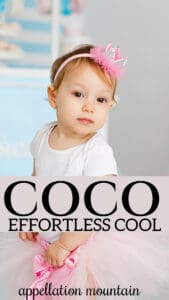