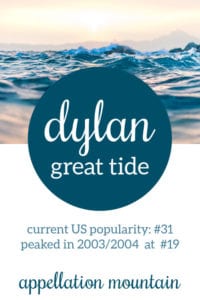 Poetic Dylan brings to mind an American musical icon, but it took a 90s heartthrob to push this name to the top.

Thanks to Urban Angel for suggesting we cover the baby name Dylan.

In Celtic myth, the name Dylan belongs to a god of the sea. It translates to “great tide.” (Though some argue that he’s derived from dylanwad – influence.)

The traditional stories were collected and written down, beginning in the 1300s. A few English translations followed in the 1700s. But Lady Charlotte Guest translated the entirety of the work beginning in 1838.

It’s known as the Mabinogion, and Guest’s translation had lasting influence.

Thanks to the legendary hero, the baby name Dylan has been traditional in Wales for years.

The first famous Dylan is, appropriately, a son of Wales.

Dylan Thomas was born in Swansea, but grew up speaking English, thanks to his English teacher dad. The name is a nod to the legendary figure.

Thomas gets credit for familiarizing the world with his once-unusual name. He’s also responsible for adopting the Anglicized pronunciation. In Welsh, this sounds more like dull un.

The poet’s heyday was from the 1930s into the 1950s. We remember lines of his most enduring works, like “do not go gentle into that good-night.” But in the mid-twentieth century, he was equally well known for his lilting Welsh accent. Thomas read many of his works on BBC radio in the late 1940s.

In the 1950s, he toured the US, back when the concept of a poet touring to read his work didn’t really exist.

1953 also marks the first year the baby name Dylan appears in the US Social Security Administration data, with six boys receiving the name.

Then along came another poet.

He considered several names before landing on the one that he made famous. While still a student at the University of Minnesota in Minneapolis, he used the stage name Elston Gunn. Gunsmoke, a Western that moved from radio to television, made Marshal Matt Dillon famous, and the singer considered that spelling of the surname, too.

But it’s said Bob came across the poetry of Dylan Thomas around that time, and the rest is history. By 1962, he had moved to New York and legally changed his name.

When asked about the name change, he once explained: “You call yourself what you want to call yourself. This is the land of the free.”

THE TIMES THEY ARE A-CHANGIN’

Dylan scored his first hits in the mid-1960s. He was an unconventional rock star, with his gravelly voice. It would become the sound of a generation, with his politically informed songs speaking to the concerns that defined the 1960s. It wasn’t just his music; Dylan himself performed in support of the Civil Rights movement, and to protest the war in Vietnam.

By 1988, Bob Dylan had achieved living icon status. He was inducted into the Rock and Roll Hall of Fame. And the surname hovered in the 100s, fitting in with 80s favorites like Kevin and Justin.

Perry’s character was two-parts James Dean, with a motorcycle and a dangerous reputation. But he was at least one-part intellectual, too, known for quoting poetry and – gasp!- reading books.

By the time the show ended its run, baby name Dylan was well established as a boys’ favorite for the early twenty-first century.

Perry and 90210 share credit for the name’s rise with a few other uses. Dylan McDermott, born Mark McDermott, was landing acting roles by the late 1980s and became a star on legal drama The Practice by 1997.

BABY NAME DYLAN … FOR A GIRL

Drew Barrymore played a female Dylan in the re-boot of Charlie’s Angels in 2000. And designer Ralph Lauren gave the name to daughter Dylan Lauren in 1974. That might be forgettable, except Lauren went on to open Dylan’s Candy Bar in 2001. The New York-based candy company is now world-famous.

The name remains in occasional use for girls, but has never reached the same heights of popularity as for boys. In 2018, Dylan ranked #398 for girls.

All of this makes the baby name Dylan a Welsh heritage choice with an Americana vibe. It’s become a modern traditional – the kind of name you wouldn’t have heard in 1950, but won’t be at all surprised to still hear in 2050.

What do you think of the baby name Dylan?