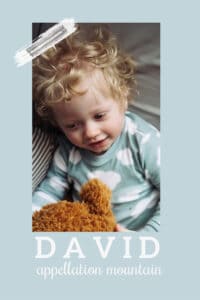 The baby name David counts as a classic.

Thanks to Maia for suggesting our Baby Name of the Day.

But the first meaning is the most often cited, so let’s stick with that one.

The name goes back millennia, to the Old Testament. The Biblical character is a towering figure. King David reigned as the second king of Israel from around 1010 BC to 970 BC.

Even if your knowledge of Christianity is non-existent, you know his story.

Well, maybe not all of it.

David is born a nobody, the son of a shepherd. But he ends up at the court of King Saul. When Israel goes to war with the Philistines, they’re challenged to send out their mightiest champion to face the Philistine contender, Goliath.

Goliath is a giant among men, tall and strong. David is puny by comparison, and he even refuses to wear armor.

You know how this goes …

Small but faithful David defeated the giant Goliath, taking down the powerful warrior with a slingshot.

The story has long been a favorite, with many a re-telling over the years. The phrase “David and Goliath” is often used to describe any underdog match-up, in sports or business or politics.

Artists have been capturing the moment for eons.

Those artists include Michelangelo.

His famous sculpture was created right around the year 1500, one of many depictions of the hero. In Renaissance Florence, David symbolized the city-state’s ability to hold its own against its bigger, badder rivals. (The statue’s position meant that David’s eyes glared in the general direction of Rome.)

So it wasn’t just an artistic triumph; it was rich with meaning, too.

The six-sided Star of David is a widely-known symbol of Judaism. While it has ancient roots, it slowly became more common during the Middle Ages.

But it’s now at the center of the flag of Israel, and for many reasons, is powerfully associated with both the nation and the faith.

Famous Davids multiply in the twentieth and twenty-first centuries.

It’s a wildly popular boy name, ranking in the US Top 30 names nearly every year since 1900.

Dr. Seuss poked fun at Dave’s everywhereness with this poem: Mrs. McCave had twenty-three sons and she named them all Dave … The Kids in the Hall sang about “The Daves I Know.”

Daves you know – or at least know of – almost certainly include:

Bowie, of course, adopted his stage name because he didn’t want to be confused with Davy Jones, the singer of The Monkees.

He’s gone on to be a legendary singer and songwriter, the innovator behind everything from Ziggy Stardust to Hunky Dory to Blackstar.

But the name travels remarkably well, and with little translation required.

Surnames like Dawson and Davis might serve to update the name. But for sheer classic staying power, it’s tough to beat Old Testament David.

While it has slipped to #30 in United States as of 2021, this remains a rock solid classic.

If you’re after an enduring name that can take your son anywhere he wishes to go, classic David is one to consider.

What do you think of the baby name David?

First published on April 9, 2014, this post was revised substantially and re-published on November 22, 2022. 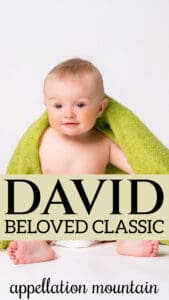 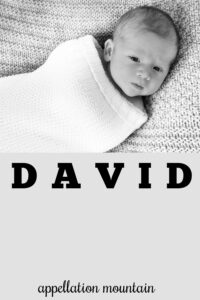