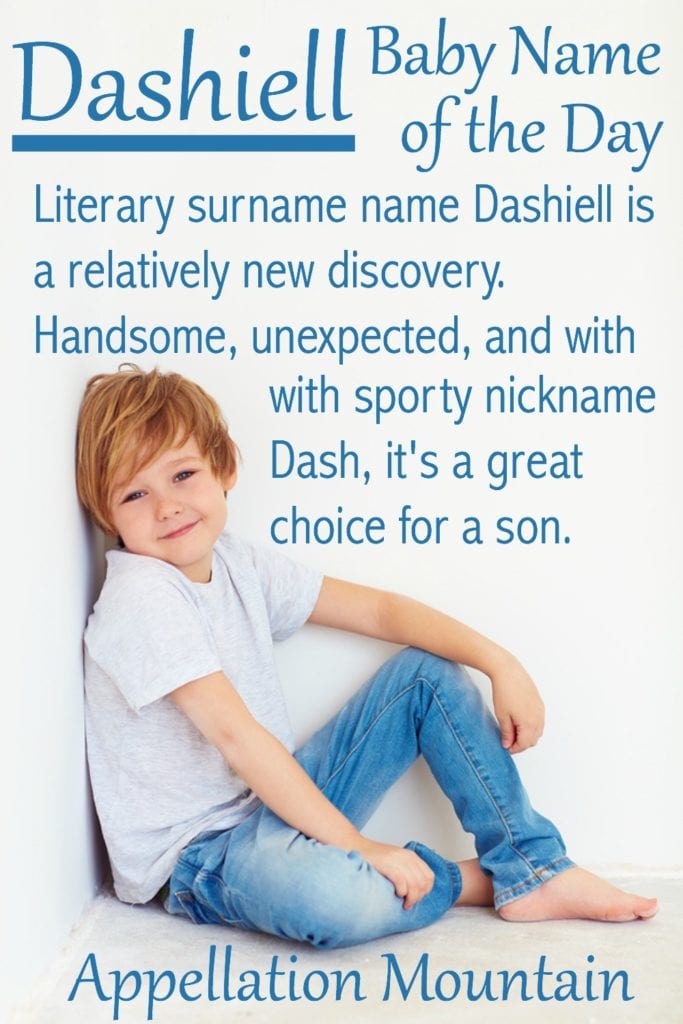 Looking for a literary name with ties to Disney and style to spare? Consider the dashing Dashiell.

Our Baby Name of the Day goes out to Lyndsay’s son.

Back in 1894, Richard and Anne Hammett welcomed son Samuel. Anne came from an old Maryland family, and her maiden name became Sam’s middle.

Their son grew up, launched a writing career, and dropped his traditional first name. We know him as detective novelist Dashiell Hammett.

Sam grew up, promoted his middle name to the first spot and became the detective novelist Dashiell Hammett.

The surname started out as de Chiel, a family of French Huguenots who moved to Scotland, then England, before finally settling in the New World.

The family also included a US Congressman, as well as other civic leaders. American Civil General George Dashiell Bayard may have been a cousin.

Even in a distinguished family, we remember Hammett best of all. He pioneered what became known as hardboiled detective fiction.

Hammett’s characters – aloof, confident, tough – inspired more fictional heroes that you can count. Even if you’ve never read his novels, you know their names: Sam Spade, Nick and Nora Charles.

Dashiell: By the Numbers

For generations, Hammett kept his name all to himself.

Fewer than five boys received the name most years during the twentieth century.

That started to change in 1979. What explains the rise?

Hammett died in 1961. In 1977, the movie Julia included Jason Robards as the writer. Robards won a best supporting actor Oscar for the role.

Perhaps that triggered a wave of interest, because a 1979 biography followed. Alice Cooper named his son Dashiell in 1985, one of only 19 boys that year. (His daughters answers to Calico and Sonora – no surprise that Alice is a daring namer!)

The numbers remained small – 20 or fewer most years into the 1990s.

Things started to change then:

Besides the ties to the Disney-Pixar film and a few high profile births, the name fits two opposing trends.

Dash is every bit as cool as Cash and a generation of brisk boy names. But say it in full, and the name fits with softer names for boys like Elijah and Sebastian.  Together, the nickname and name make this a versatile choice for a child.

But overwhelmingly, this name remains literary, rare, and oh so very wearable. It makes a great choice for a son today, just under the radar enough.

What do you think of Dashiell?

This post was originally published on February 20, 2010. It was substantially revised and re-posted on October 3, 2016.