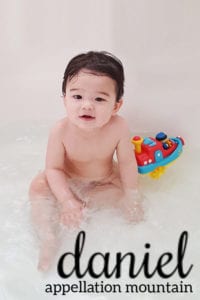 Daniel traveled from the lion’s den to the top of the pop charts, a timeless choice every step of the way.

Thanks to Julia for suggesting our Baby Name of the Day.

The Old Testament Daniel led quite the exciting life.

It’s said that he was a Jewish noble, handsome and smart, sent to be educated at the king’s court in Babylon while still a young man. He interpreted the king’s dreams when all the royal advisers fail.

The phrase “the writing on the wall,” comes from one of the legends about his time at court. King Belshazzar held a feast, where he blasphemously drank from a sacred vessel. A mysterious message appears on the wall. No one can translate it, until Daniel is summoned and explains that Belshazzar will lose his kingdom. The king doesn’t live through the night. Daniel, however, retains his place at court and advances.

Then there’s the lion’s den.

King Darius decreed that for 30 days, no one could pray to a god other than the king. Pious Daniel prays anyway, knowing he risked death. The king found out, and tossed him into a den full of hungry lions – a death sentence. Except God intervened, making the ferocious cats as tame as kittens. The next morning, Daniel emerges unscathed.

As with many a Biblical name, the -el refers to God, so Daniel means “God is my judge.”

The lion’s den remained a popular tale over the centuries, and it helped keep Daniel popular throughout Europe.

Many a famous figure answers to the name over the centuries. But music plays a big part in the name’s story, too.

The “Londonderry Air” was a traditional tune for years. English songwriter Frederic Weatherly added the lyrics, transforming it into “Danny Boy” in 1913.

It’s one of the most famous songs of all time, recorded by many a favorite artist. (The list includes Elvis Presley, Johnny Cash, and Judy Garland – just for starters.)

In 1973, Elton John released “Daniel.” It was considered too long and too somber to be a single – but it became an unforgettable hit. Many years later, John named his younger son Elijah Joseph Daniel.

While it’s not as traditional as “Danny Boy,” it’s another song that everyone has heard.

Famous figures by the name are too numerous to count: Akroyd, Boone, Bernoulli, Craig, Day-Lewis, Defoe, DeVito, Elfman, Glover, Marino, Ortega, Radcliffe, Rather … and on and on.

Together, they span generations. Craig first picked up the mantle of James Bond in 2006’s Casino Royale, but the character dates to 1953. We met Harry Potter back in 1997. Radcliffe first picked up a wand in 2001. Both franchises are still going strong, though Radcliffe has graduated from Hogwarts, and Craig has promised to hand in his license to kill after the latest Bond movie.

Still, Radcliffe was born in 1989, three decades after Daniel Craig’s 1968 birthday. It demonstrates just how very classic this name feels.

If you have preschoolers right now, you might think of a very different Daniel: Tiger.

Mister Rogers’ Neighborhood gave us this resident of the Neighborhood of Make-Believe back in the 1960s. In 2012, PBS Kids introduced an animated series based on Daniel, as well as other young residents from the same ‘hood.

The show is currently in its fifth season, ensuring that the name remains familiar to yet another generation.

No question it belongs with classic boy names, and yet it occupies an interesting spot. It’s not as stylish as Henry or even Samuel, names that feel more recently revived. Nor is it as enduring as Joseph or James, names long in the Top Twenty. But neither is it surprising, like Peter or Paul.

Instead, Daniel feels solid, familiar, timeless. From the lion’s den to Elton’s soaring lyrics, Daniel is a quietly beloved name for a son.

What do you think of Daniel? Would you consider it for a son? 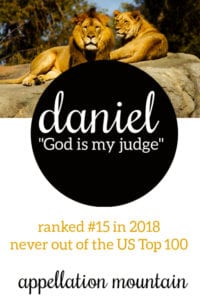