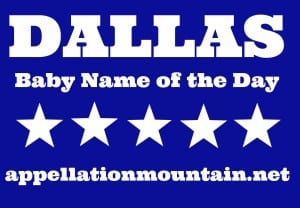 Place names are stylish, and this one has a surprisingly robust history of use.

Thanks to Elisabeth for suggesting Dallas as our Baby Name of the Day.

Here’s a surprise: Dallas has always ranked in the US Top 1000 for boys’ names.  Yup.  Every single year from 1880 right through 2013.  He’s usually ranked somewhere between the 200s and 400s – making him just rare enough that he feels surprising, but just common enough that you may have met one.

What explains his long history of use?

Odds are that it isn’t our affection for Texas – though Austin has fared well over the years, and Houston is not unknown.

Instead, those early babies named Dallas probably took their name from the same place as the city – it’s a surname, originally Scottish.  It translates to something like meadow dwelling, from the Gaelic dail and fas.  As surnames go, it’s not the most common – but there have been plenty of notable bearers.

It isn’t clear which notable bearer inspired the city’s name.

They’re the obvious possibilities, but they’re not the older ones.  John Neely Bryan, the founder, never explained, at it was also the surname of at least one early settler.

Today, though, it’s tough to separate the name itself from Bryan’s town.  It’s the ninth biggest city in the US, a bustling metropolis built by the railroad, the oil industry, and more since.

Part of the mystique is, of course, down to the small screen.  Can’t you hear the theme song?

As a television show, Dallas was a sensation.  The title sequence showed it all – gleaming skyscrapers, cattle and horses, oil rigs, the Cowboys stadium.  Acres of ranch land, and yes, Stetsons!  The question “Who shot J.R.?” consumed the American public for months in 1980.

Dallas was rebooted in 2012, and here’s an interesting thing: there was a second Dallas effect, but instead of increasing usage for boys, Dallas caught on for girls, charting in the US Top 1000 for girls for the first time in 2012.

If this one is on your family tree, or if you have ties to Texas to celebrate, Dallas might make a surprisingly wearable choice for a son or a daughter.  Frills-free, cowboy-cool, less expected than Daniel or Alice, but not completely unknown, either.