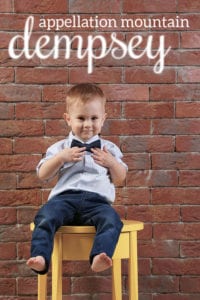 Our Baby Name of the Day comes from this list of the hottest 1919 boy names.

Here’s all you need to know about Dempsey’s meaning: at times, it was Anglicized as Proudman.

That’s because it comes from a Gaelic word – díomas – meaning proud. Maybe even arrogant or haughty. A given name, which led to a surname, share the word as a root.

So it’s an authentically Irish choice, with plenty of famous bearers on both sides of the Atlantic.

Kid Blackie. The Manassa Mauler. William Harrison “Jack” Dempsey picked up plenty of nicknames on his way to earning the world heavyweight champion title from 1919 to 1926.

Bernie – big brother to the 1920s Jack – first borrowed the nineteenth century boxer’s identity while fighting for money in barroom brawls. He eventually handed it down to his little brother, and the rest is history.

Jack wasn’t just a much-titled prizefighter. His matches set attendance and revenue records, topping the $1 million mark when that was still unthinkable. His bouts were so popular that they helped pioneer live broadcasts of sporting events.

In his day, he was as famous as other early twentieth century sports heroes like Babe Ruth. Jack is a boxing Hall-of-Famer, and remains widely known, four decades after his death.

His surname owes a lot of its appeal to the legendary athlete.

The boxer clearly inspired parents during his lifetime.

Plenty of surnames hugged the edges of the US Top 1000 in the late nineteenth century, presumably family names handed down by custom.

But hero names caught on, too – politicians were big, with presidential surnames like McKinley and Wilson spiking in use during their election years.

Dempsey caught on, too. A big bump in use came in 1919, which sent the name back in the Top 1000 for the first time in nearly a decade. It tracks with the boxer’s first title win.

The most famous Dempsey of our moment is actor Patrick, famous for his long run on television medical drama Grey’s Anatomy. He’s also an accomplished race car driver.

During his celebrated run as Dr. McDreamy, People Magazine named him to the Sexiest Men Alive list multiple times.

It’s a different image from the boxer, but an appealing one, too.

In 2014, when Grey’s was near its peak popularity and Patrick was preparing to exit the series, the name hit a twenty-first century high, with 94 births that year.

All of this gives Dempsey so much swagger. It feels handsome and tough; at-home in our modern moment and yet charmingly vintage, too.

Like Riley and even Murphy, the name sees some use for girls, but remains majority masculine. Popular author Mary Kay Andrews used the name for a female character in 2009’s Fixer Upper. As of 2018, 55 boys and 26 girls received the name.

So for now, Dempsey remains so rare that most people have never met someone with the given name. If you loved choices like Brady and Riley, but want something fresh and new, this name belongs on your list.

What do you think of Dempsey? Would you consider it for a son?