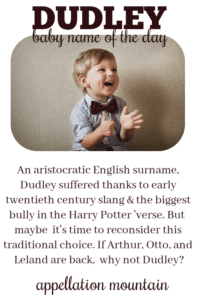 Dudley once belonged with mainstream favorite choices for boys, but today, it’s teetering on the edge of obscurity. Can it make a comeback?

Thanks to Jen for suggesting her son’s name as our Baby Name of the Day.

We love a good -ley name in the US. Just ask Ashley, Riley, or Everly. Most of the time, the last syllable comes from the Old English leah – clearing or wood. Since places often inspired early surnames, no surprise that plenty of -ley last names are in heavy rotation today.

But while we know that Ashley refers to ash trees and Everly to boars – as in the animal – we’re less certain about the first syllable in Dudley.

It almost certainly comes from a personal name, something like Duda or Dudda. The Dictionary of Medieval Names from European Sources lists a few candidates, including Dudo. Surnames like Dodd offer some additional clues. But mostly we don’t know an exact etymology for this name.

There’s been an Earl of Dudley in the English peerage since the 1300s, with some interruptions. The title comes from a castle by the name, even older than the family. It traces its roots to a wooden structure built shortly after the Norman invasion, and a grander installation constructed sometime in the 1200s.

A member of the family became the powerful Duke of Northumberland, but if you recognize the name, it might be thanks to Lord Robert Dudley, advisor to Queen Elizabeth I. His personal story is chock full of politics and intrigue. Robert’s younger brother, Guilford, met his death at the scaffold as the husband of nine days’ queen, Lady Jane Grey.

But all that’s beside the point: what it means is that this name belongs with Clarence and Cecil and Neville. They’re aristocratic surname names we associate with the history books, worn by men of accomplishment, and widely used as place names and given names – at least at some point.

Dudley became a staple given name for boys in the nineteenth century. You wouldn’t call it popular, but neither was it rare – it ranked around the same as Kendrick, Clark, or Solomon today.

In 1947, Cary Grant wore the name as the angel who intervenes in The Bishop’s Wife. Five decades later, Denzel Washington would re-create the role – and keep the name.

By the 1950s, the name was falling out of favor. In 1961, we met Dudley Do-Right. Well-meaning but bumbling, he was part of a long-running segment on The Rocky and Bullwinkle Show. Do-Right tried his best to rescue the fair Nell from dastardly Snidely Whiplash. Most of the time? Nell’s rescue depended on plain dumb luck. It’s a spoof of silent films, complete with Nell tied to the train tracks and such.

The character remains widely known, with occasional revivals. A 1999 live action movie starring Brendan Fraser in the title role failed at the box office, but there’s still a flume ride named for the character at Universal’s Islands of Adventure theme park.

Not long after we met the animated Canadian mountie, this name fell out of the Top 1000 entirely. As of 2017, a mere dozen boys received the name.

The character isn’t to blame, exactly. Instead it’s modern slang. “Duds” has referred to clothing since the fourteenth century. It especially referred to worn-out, ragged clothing. By the early 1900s, a dud was something – or someone – who was worn-out. Useless. During the first world war, the term was applied to shells that didn’t explode. “Dud” became another word for failure.

Surely that led to the name’s downfall more than anything.

Still, it didn’t disappear immediately. Oscar-nominated English actor Dudley Moore kept it in the spotlight in the 1970s and 80s, with star turns in box office comedies like Arthur. Moore was also an accomplished musician and composer.

He lent the name a certain British charm, reminding us that it was a given name with long history – even if it was seldom used for children anymore.

The name’s negative associations made it a logical choice for JK Rowling’s Harry Potter series. She gave the name to Harry’s cruel cousin, the son of Petunia and Vernon Dursley. The couple showered their son with every toy and gadget under the sun, while Harry slept in a cupboard under the stairs.

While the original seven novels were being written, fan theories suggested that we might learn Petunia – sister to Harry’s mom, Lily – or her son were somehow magical. Or, at the very least, that they’d redeem themselves in the fight against evil.

But the Dursleys disappointed us, time and time again. They leave a negative imprint on their names, especially, I think, the spoiled and spineless Dudley.

Dudley: Back from the Brink?

It’s easy to imagine that the Harry Potter character would cast a long shadow. And yet, we’re always keen to rediscover neglected names.

Sure, the first syllable is dud. But it also rhymes with cuddly. And Do-Right himself might be less than suave, but he does, in fact, try to save the day no matter what.

There’s a lot of positive to consider.

And here’s the thing: there’s just no such thing as gone for good. The minute a name starts to enter that category, it signals that daring namers might consider it.

If you’re after a rare, but real name, Dudley would make a bold choice, the kind of name so far out of style that it seems downright cool. It’s the kind of name I’d expect to find on Hello, My Name is Pabst, right next to Otto and Jarvis, a grandpa name with an edge.

It’s the kind of name that will still raise a few eyebrows – but I think cuddly Dudley can definitely grow with a child.

What do you think: does Dudley have a chance of making a comeback?