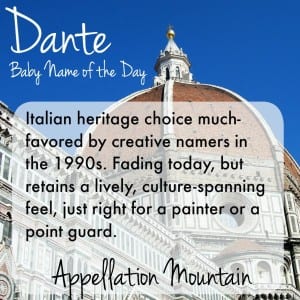 This post was originally published on June 5, 2008. It was substantially revised and re-posted on March 9, 2015.

This name has a great meaning. Dante comes from the Latin durare – to last. It’s the same root as our words endurance and durable. Of course, it can also mean to harden or to be stubborn.

But if you’re choosing meanings, a word like endurance is preferable to, say, bull-headed.

Dante is the contracted form of Durante. Other forms of the name include Duran, Durans, Durant, Durand, and Durante.  There’s a nineteenth century Italian priest known as Blessed Marco Antonio Durando.

The most famous bearer of the name was born Durante Aligheri in thirteenth century Florence.

He wrote the Divine Comedy at mid-life. The epic poem isn’t just a literary masterwork. It’s the foundation of the Italian language as we know it today.

Aligheri takes us from the Inferno of Hell through purgatory to paradise in 13,000-odd lines. We meet ancient poet Virgil, as well as the author’s beloved Beatrice.

Chaucer and Milton referenced the Divine Comedy. Longfellow translated the work into English. It’s inspired movies, music, and the visual arts for years.

There’s even a female Dante in literature – the devout governess in James Joyce’s A Portrait of the Artist as a Young Man. In this case, it’s a spin on the character’s heavily accented pronunciation of “Auntie,” not a given name.

Respellings of Dante were also in favor:

Most of those names were probably given to African American boys, at least most of the time. The De- construction has long been popular, and the 1990s were was the age of Dandre and Dangelo – or make that D’andre and D’angelo.

Notable bearers of the name reinforce the image: football’s Daunte Culpepper (born in 1977) and Donté Stallworth (born in 1980), early members of the respelled-Dante club. The NBA gives us a Dontae and a Dahntay.

And so Dante’s image has shifted slightly: from Italian poet to African American athlete.

Dante has been falling since the late 1990s. Too bad, because how many names can you list that are perfect for a painter or a point guard?

Of course, that could be good news. As of 2013, Dante ranked #289 and falling – making him much less common than many comparable possibilities.

Overall, it’s a historic choice that feels fresh and modern, but not nouveau. It’s the kind of possibility that could appeal to parents seeking a culture-spanning name that is easy to wear.

What do you think of Dante? Will this name continue to fall, or is it due for a rebound?