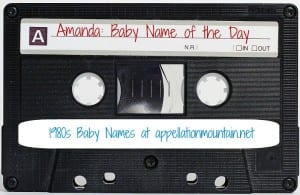 For me, this is the ultimate 80s name, the name I wanted for myself in seventh grade.

Our Baby Name of the Day is Amanda.

Of course, Amanda isn’t actually a creation of the Reagan years.

Back in the 400s, the future Saint Amandus was Bishop of Bordeaux.  Amandus comes from the Latin “to be loved.”  Amanda would be the feminine form, but there’s no record of it being used as a feminine name at that point.

There’s another Saint Amandus from France in the 600s, but again – no girls.

There’s an oft-repeated claim that Amanda first appears in the early 1200s in Warwickshire, England.  This seems to come from researcher P.H. Reaney.  I can’t find the original record, but it seems likely.  Am- names had a good run, from Amabel, the forerunner of Annabelle, to Amice, Amy, Amelot, Amance, and more.

There’s a poetic reference from the thirteenth century.  Guido Cavalcanti refers to Amanda of Toulouse – though it isn’t clear if the name was a poetic invention or a one in use at the time.

By the 1600s, the Latin word inspired the use of Amanda anew.  Playwright Colley Cibber used it for a character in his 1696 “Love’s Last Shift.”  His Amanda is virtuous and clever, too.  She retains those traits in the sequel, written later that year.

Fast-forward to the nineteenth century, and Amanda was established.  By the late 1800s, she appeared in the US Top 100.

The name faded in the first half of the twentieth century, though it didn’t disappear – Noel Coward’s heroine in his 1930 Private Lives answered to the name.  It was also the name of Tennessee Williams’ troubled, match-making mama in 1944’s The Glass Menagerie.

Then along came Barry Manilow’s recording of “Mandy.”  Fun fact: Mandy was originally titled Brandy – only another song titled Brandy had recently topped the charts.  The song became a #1 hit in the US.

Other 1980s references include:

Tons of women were given the name, and you’ve heard of plenty of them, especially actresses – from Seyfriend to Plummer to Moore.  Athletes, too, like Olympic gold medal-winning swimmer Amanda Beard come to mind.

And yet, I think there’s a case to consider Amanda timeless – with her great meaning, long history of use, and similarity to stylish choices like Amelia, why wouldn’t Amanda wear well in 2014?

What do you think of Amanda – is she a classic with literary ties, or a dated name due for a long rest?