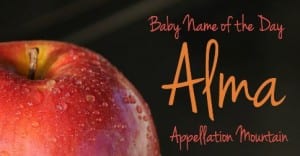 There’s something haunting about this meaning-rich name.

Thanks to Anne for suggesting Alma as our Baby Name of the Day. 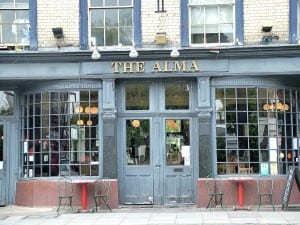 Back in 1854, Russia went to war with Great Britain and France. The first battle of the Crimean War took place in what’s now the Ukraine, near the River Alma. The British and French forces were victorious, and Alma appears as a patriotic name in England and France.
Among the places named in honor of the battle: a bridge across the Seine in Paris, many streets, a pub or two. It’s a common place name throughout the US.

It also came into use as a given name for girls and boys, especially children born to soldiers who’d fought there.

Long before the 1850s, you might have met a girl named Alma. In some cases, it might have been a variant of Amalia, from the common Germanic element amal – work – though that seems like a stretch. 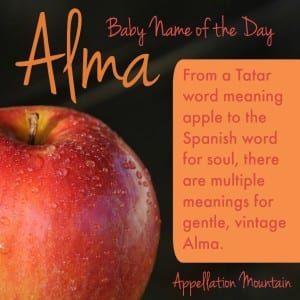 Or maybe it was based on the Latin almus – nourishing. The phrase Alma Mater means “bountiful mother” – a reference to how the educational institutions we attend nurture our intellects. There’s a thirteenth century Saint Almus, so the name must have seen some use.

But for all of those children named after the battle, we have to look at the origins of the River Alma’s name. In that case, it’s said to come from a Tatar word. Tatar is a Turkic language, spoken where Eastern Europe meets Asia. In Tatar, it means apple.

Then there’s a prophet from the Book of Mormon’s Book of Alma – actually a father and son by the name. This probably explains the sizable number of men called Alma in the late nineteenth and early twentieth century in the US.

Alma: By the Numbers

Alma remained very popular into the twentieth century. The name charted in the girls’ US Top 100 through 1927.

At the turn of the twentieth century, Vienna-born socialite Alma Mahler married the famous composer Gustav Mahler. She was a composer in her own right. After her husband’s death she married architect Walter Gropius, and then later, the Prague-born writer, Franz Werfel. The couple were forced to leave Vienna for France ahead of the Nazis, and eventually settled in Los Angeles. Alma is remembered for hosting artists’ salons in both Vienna and in their new home in California.

She remains a fascinating figure. For many years, her biographies of her first husband were considered definitive, though later scholars discovered that she only shared a partial picture of Gustav Mahler’s work.

It was a pitch perfect name for the ghost in the 1979 story turned 1981 film Ghost Story. And it was a reasonable choice for a character in 2005’s Brokeback Mountain, which started in the 1960s with characters who would have been born in the 1940s.

But today, buoyed by history, meaning, and the name’s popularity with Spanish speakers, Alma is on the upswing. The name reached #680 in 2014, and seems likely to follow other short, vintage names like Mila and Cora
up the popularity charts.

What do you think of Alma? Ready for revival, or still too dusty?