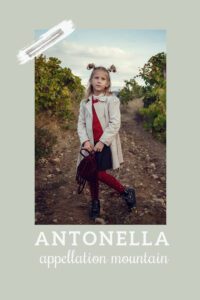 Thanks to Christina for suggesting our Baby Name of the Day.

Names like Victoria and Gabriella, Natalia and Alexandra all sound just right for our daughters.

It’s a feminine form of Anthony.

You might know that Anthony’s H is a late addition. English speakers adopted it because of the Greek word anthos – flower.

Antonio dominates for boys in Italian, with Antonia the feminine form.

Italy gives us many famous women by the name.

Actors include Antonella Costa, most famous in Argentina.

Antonella Lualdi starred in French films during the 1950s. She named her daughter Antonellina, a double diminutive.

This list barely scratches the surface of the Italian women with the name. It was a Top 100 favorite in Italy as recently as 2007, and remains in the Top 200.

However, Antonia ranks as the most popular Anthony name in Italy now.

Chilean actor Antonella Rios is famous for telenovelas in her native country. She might help explain why the name ranks in Chile’s Top Ten.

Or maybe it’s just having a moment in the Spanish-speaking world. Argentine telenovela Antonella aired in 1992. The name is heard throughout South America.

Beginning in the 1960s, the baby name Antonella appeared in the US popularity data.

Of course, Antonias in Italian families might’ve been Antonella at home.

But the name’s rise tracks with so many other -ella enders. Think of Gabriella and Isabella, twenty-first century favorites.

Antonella Barba competed on American Idol in 2007, too, therefore giving the name some exposure.

But Antonella offers other options. Ella, Nell, and Nella all feel quite current.

Overall, the baby name Antonella feels romantic and elaborate. It fits with current Top Ten favorites like Olivia. In addition, we all know how much Ella appeals!

It also retains a strongly Italian style. Like Francesca or Gianna, Antonella works for families of any background. But it might be especially fitting for parents seeking to honor Italian roots, or express their love for the country.

The baby name Antonella might honor an Anthony. Of course, it might reinvent another Anthony name, too.

What do you think of the baby name Antonella? 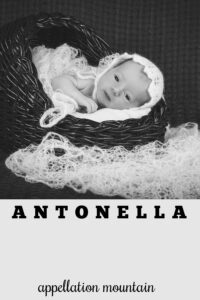