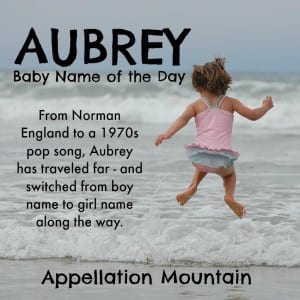 Thanks to Sara for suggesting Aubrey as our Baby Name of the Day.

It all begins in England.

The Normans brought the Germanic Alberic with them.  The first element is that familiar alf – elf, and the second comes from ric – power.

It was Latinized as Albericus, and there’s an Anglo-Norman noble family that passed the name down over the generations.

The first Albericus de Vere was a baron during the time of William the Conqueror.  His name was passed down to his son, and remained in the family for generations.  Aubrey de Vere was the 1st Earl of Oxford in the twelfth century.

This makes the case that Aubrey was traditionally male, and pirated by twenty-first century parents for their daughters. Except Albreda and Albrea appear as feminine forms of Alberic.  Aubrey or Awbrey appears in medieval England – at least sparingly – as a common feminine form of the name, too.

French form Auberon is the source of Shakespeare’s fairy king, Oberon, in A Midsummer Night’s Dream.

There’s a long history of Aubrey as a surname and masculine given name in the US, especially through the first half of the twentieth century.  Child actor turned rapper Drake was born Aubrey Drake Graham in 1986.

By the 1970s, Aubrey was fading.  And then along came a song by Bread.

Singer-songwriter David Gates wrote “Aubrey” after watching Breakfast at Tiffany’s, starring Audrey Hepburn.  (Yes, Audrey – not Aubrey.  More on that in a minute.)

The opening lyrics made it clear that Aubrey was a girl:

And Aubrey was her name; A not so very ordinary girl or name

Later, he sings that they “tripped the light and danced together to the moon.” and “I loved her name.”

It didn’t ruin the name for boys, exactly – in fact, Aubrey remained in the boys’ Top 1000 until 2002, slowly fading, just as it had been before the hit song. Remember how it was actually Audrey Hepburn’s performance that inspired the songwriter?

So while we often dismiss Aubrey as a trendy, unisex spin on Audrey, the numbers don’t quite bear this out.

Because Audrey also started to climb after the Bread single.

Comedienne-actress Aubrey Plaza was named after the song, and she was born in 1984 – more than a decade after it charted.  Check out the numbers for both names that year.  Aubrey was up to #184, and Aubrey to #367.

Today Aubrey just plain fits with names in vogue for girls: fellow Top 20 picks Addison and Avery, as well as up-and-comers like Paisley and Emery.

And yet, you might find that Aubrey has more history than some other popular names. With a history of using stretching back to the Norman invasion, Aubrey may not be surprising or unusual, but this name has roots.

What do you think of Aubrey? Overused? Better for a boy? Or pure perfection for a daughter?