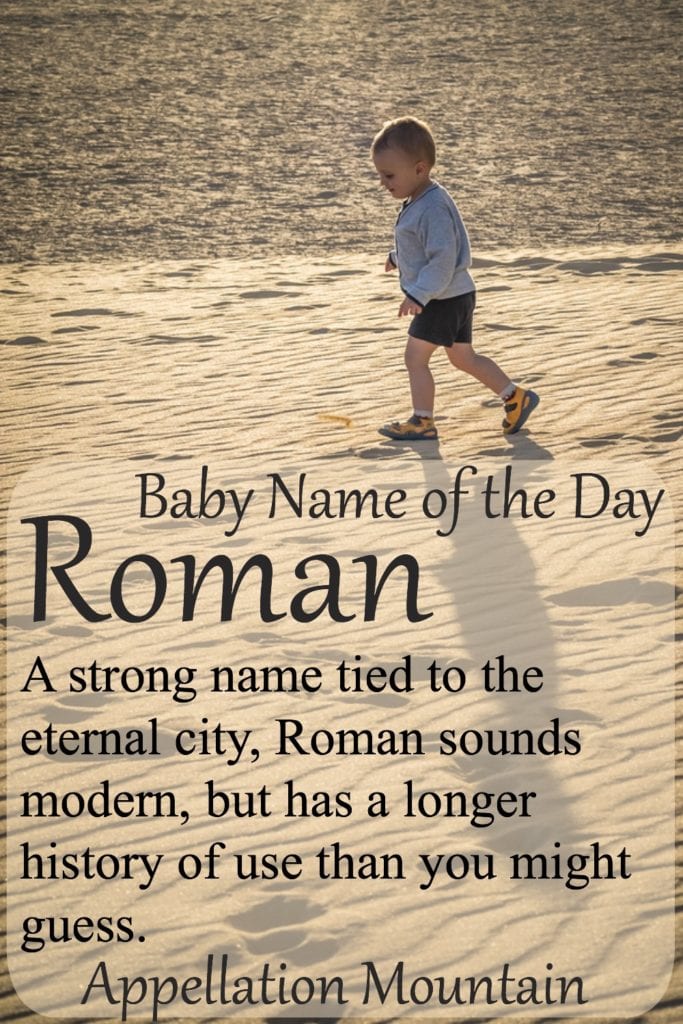 This name might sound new, a brother for Kaison and Dash. Except Roman has history galore, even without considering the glories of Rome.

We like to say that Rome took its name from founder Romulus. That’s probably more story than fact. Instead, Rome might come from an old Etruscan name for the Tiber River, a Greek word meaning strength, or maybe something else entirely.

We do know that, for millennia, Roman has referred to a citizen of the world-changing city.

A tenth century Bulgarian tsar answered to the name, followed by a half-dozen other Slavic royals. A half-dozen saints or more claim the name. So does an Oscar-nominated member of the Coppola film family, as well as the controversial director Polanski, a Russian cosmonaut, and the “Godfather of Cantopop,” Roman Tan.

Factor in athletes, scientists, politicians, and the like, and the name emerges as an international, adaptable, nearly traditional choice for a son.

Roman: By the Numbers

What explains the name’s appeal? A few guesses:

Speaking of sound, a quick glance at the US Top 500 reinforces that claim. Nature name Rowan comes in at #219, with Irish Ronan not far behind, at #335, and Japanese samurai-inspired Ronin at #486. The Tolkein-esque Rohan also ranks in the Top 1000. Ro names – and Bo names, too! – are enjoying their moment in the sun.

Parents elsewhere appreciate the name. Besides other English-speaking countries, the name appears in the Czech Republic’s Top 100. Variant form Romain is big in France and Belgium.

But there’s one more factor that sparked the name’s rise.

Beginning in 1981, NBC’s Days of Our Lives included a character by the name. Over the course of three decades, multiple actors played the part. He’s been murdered but not murdered, and embroiled in spy capers that you might think unlikely in a small town.

The name climbed in use, from the 1980s until today.

Along the way, HBO Original Series Big Love gave us a villain by the name. Celebrities Debra Messing, Cate Blanchett, and Molly Ringwald chose it for their sons.

My favorite fun fact about this name? In French – and Dutch and Danish and several other languages – roman is the word for novel. That makes this name literally literary – and perhaps the perfect pick for a reader.

Roman: On the Rise

Roman strikes me as the masculine equivalent of Cora – a strong name that seems underused. And, for now, the name remains outside of the Top 100. But it seems like a safe bet that this name is heading up, an on-trend choice thanks to an appealing combination of modern, strong sound and history galore.

This post was first published on November 24, 2009. It was substantially revised and reposted on July 1, 2o16.