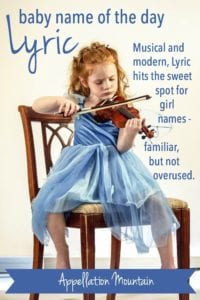 Lyric has transitioned from 1990s newcomer to 21st century staple.

We’ve all sung them.

But ages before this word name was tied to music, it referred to a poem, often recited to music. And that music? Often it was played on a lyre, hence the Greek word lyrikos. The French lyrique referred to a short poem, but in English, this word referred to the words of popular songs by the late 1800s.

It retains a slightly musical quality, making it a fitting name in our age of Aria and Cadence.

A handful of children – boys and girls alike – received the name over the course of the twentieth century. Five boys born in 1928 were called Lyric. So were a dozen girls in 1976.

Credit goes to Jason’s Lyric. The 1994 romance starred a young Jada Pinkett Smith as Lyric. Set in 1990s Houston, the movie explored her romance with Jason. Tragedy strikes when Jason’s younger brother is involved in a botched bank robbery. In a Romeo and Juliet twist, Lyric’s brother is also involved in the failed heist.

Events go downhill from there, but unlike Shakespeare’s tale of star-crossed lovers, there’s a not completely tragic ending.

The movie and the soundtrack were modestly successful. But even if you hadn’t seen the film, just hearing about it might boost the possibility of Lyric as a given name.

Lyric: By the Numbers

Following the huge spike in 1994, the name held steady for a few years.

And then it started to climb.

What explains the increase?

This time, the rise of musical word names makes for the most likely explanation. In 1995, names like Aria and Cadence failed to crack the US Top 1000. By 2007, both of those names, along with Harmony and Melody, were gaining.

I suspect this name made for an ahead-of-the-curve pick in the 1990s. By the early 2000s, it felt exactly right.

Sound-wise, nothing gives this name strongly to the girls. In fact, a small but steady number of boys are receiving the name. While Lyric ranks in the girls’ Top 300 in the US, it also falls inside the US Top 1000 for boys.

Unusual spellings aside, I think this name hits the sweet spot, especially for girls. It feels feminine, but not frilly. It fits with musical favorites like Aria, but remains much less common. And while grandparents might find this name wildly unusual, it will feel perfectly reasonable to a 2017 kid’s peers.

If you’re looking for a tailored, modern, and slightly unusual name that remains easy to spell and pronounce, this one belongs on your list.

What do you think of Lyric? Do you like it better for a boy or a girl?