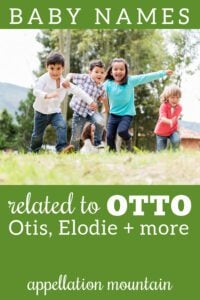 They’re almost all obscure. But some have been mainstream favorites in the past. Others could be in the coming decades.

And even the Otto names that remain quite rare can sometimes attract the spotlight.

Let’s take a closer look, because this family of quirky classics could be just for you.

Once upon a time, there was a tiny Germanic name element: Aud. It meant wealth, and appeared mostly in compound names like Audovacar.

The sound was fairly common, so not every name ending in -aud is related.

Aud led to Audo, Odo, and the familiar Otto.

The baby name Otto has more than tripled in use over the last decade, so it’s worth paying attention to all of the names in this family.

The first Holy Roman Emperor was Otto the Great, back in the 900s. Fast forward a thousand years to the 1800s in America, and Otto was a Top 100 pick. Then came war, and all things German were less desirable. Otto faded, leaving the US Top 1000 entirely in the 1970s.  But now the name back, re-entering the US Top 1000 in 2011.  Otto feels quirky and cool. With that vibrant ‘o’ ending, it’s a less-popular alternative to Leo and Milo – at least for now.

Otto has the edge in terms of numbers, but Hollywood prefers Otis.  Olivia Wilde and Jason Sudeikis admitted that they were influenced by singer-songwriter Otis Redding when they named their son Otis Alexander in 2014. Otis is originally a surname form – think of Otis elevators and escalators. But it traveled to the first spot long ago, and was only slightly less popular than Otto in the nineteenth century.  Otis returned to the US Top 1000 in 2015.

No one is naming their sons Odilon. But this French rarity, just a few sounds removed from Shakespeare’s Oberon and the celestial Orion, seems worth a mention.

Fun fact: Cody comes from an Irish surname, Mac Óda. It means son of Odo, as in Otto. Chances are that the Normans brought the Otto names to Ireland, and time worked its magic.

Olivia, Amelia, Odelia. It’s easy to imagine this name fitting right in, isn’t it? Odelia hugged the edges of the US Top 1000 back in the late nineteenth and early twentieth centuries. 37 girls were given the name last year.  Meanwhile, Odilia is even rarer – never in the Top 1000, and a mere six girls given the name in 2020. With no notable saints, queens, or pop culture references to speak of, Odelia seems destined to languish unused. And yet, if you’re after a girls’ name ending in -lia that is truly distinctive, Odelia qualifies.

Odette had a good run in France in the 1920s, and Odette Sansom was a heroine of the French Resistance during World War II.  In the US, Odette would have likely remained obscure, except for one little thing: The Black Swan.  Tchaikovsky’s ballet Swan Lake was given new life in 2010, thanks to the Oscar-nominated film.  Now we all know that the White Swan is called Odette.  A few years, Odette surfaced on all sorts of lists claiming it was a hipster baby name. Maybe. Because while it remains outside of the US Top 1000, a record 143 girls were named Odette in 2020.

If Odette is the White Swan, does the Black Swan have a name?  Yes, yes she does – Odile, pronounced oh DEEL. There’s a Saint Odile of Alsace. Tradition holds that she born blind sometime in the 600s. Her powerful father disapproved of a disabled daughter. Odile was sent to a monastery, baptized, and her sight was miraculously restored.  Her cult was big in the Middle Ages, especially in Germany, but Odile was a French saint. (Odilia is the Latinized form of Odile.) Strictly speaking, Odette evolved as a pet form of the more formal Odile – but they’ve long been understood as two separate names. In France, the name peaked in the 1950s.  It’s seldom heard in the US.

A favorite in name circles, with a literary lilt thanks to a Robert Louis Stevenson poem and a mention by Goethe. Ottilie feels French, but is actually German. That means the final ‘e’ is pronounced in German, making this sound more like Odelia. In England, though, Ottilie sits just outside the current Top 100, and is pronounced phonetically: ah til ee.

British actors Sienna Miller and Tom Sturridge welcomed a daughter named Marlowe Ottoline in 2012. A few years earlier, the name was given to a children’s book character. During the 1920s and 30s, Lady Ottoline Morrell was a noted hostess of a literary salon that attracted writers like Aldous Huxley, Virginia Woolf, and TS Eliot. But that’s where the trail of noted Ottolines ends – at least for now.

A fast-rising favorite, Elodie entered the US Top 1000 in 2019. No one would connect it to Otto. But it’s the French form of the Spanish Alodia. And Alodia probably came to Spain with the Visigoths between the 600s and 800s, and comes from the element aud. We remember Alodia because was martyred in the ninth century during the Christian persecutions in Cordoba, along with her sister Nunila. But Elodie succeeds mainly on sound, a mix of Ellie and Emily and Sadie, too.

This next group of Otto names connects to the original by a gossamer thin strand.

Ead is the Old English equivalent of Aud, and it also features in many a name. It might be a stretch to call these Otto names, but they share some onomastic DNA. While the connects are there, it might be far from obvious.

That Old English cousin to aud was well-used in given names. While some of these died out after the Norman conquest, many were revived in the nineteenth century. Today they range from stylish up-and-comers like Edith to classics like Edward to those in style limbo – probably the right category for Edgar and Edwina, at least for now.

No one is likely to name a son Eudes in the US today. But you’ll find Eudes in the history books. There was a ninth century King of West Francia. And Eudes survived as a surname, as in Saint John Eudes, the seventeenth century priest and founder of the Order of Our Lady of Charity.

A Scottish surname name, Adair is sometimes connected to the given name Edgar. Through Edgar, this becomes one of the Otto names.

Monet immediately brings to mind the artist, Claude Monet, a founder of Impressionism, and perhaps one of the best known painters of all time. But as a surname, Monet may be related to Edmond – and thus an Otto name.

Otho could be a Roman family name, or it might be another form of Otto.  If Otho is an Otto name, than so is Othello.

Which Otto names are your favorites?