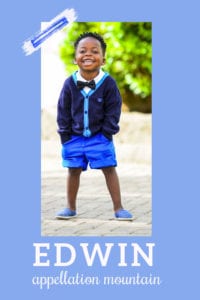 Thanks to Frances for suggesting our Baby Name of the Day.

With roots in Old English, the baby name Edwin shares the ead of Edward, Edgar, and Edmund, meaning wealth. The second syllable is heard in Alvin – it comes from wine, friend.

So the meaning feels auspicious.

Way back around the year 586, Edwin – or Eadwine – was born a prince. He eventually became King of Northumbria, reigning for twenty years and bringing peace to his kingdom. Because he converted to Christianity, he’s considered a saint.

Plenty of other historical figures answered to the name in the same era. But then the name faded, as so many Old English favorites did, following the Norman invasion.

Sometimes we imagine only twenty-first century parents seek out vintage gems. Turns out that’s been happening for ages.

Nineteenth century authors and parents alike revived bunches of Anglo-Saxon favorites, with simplified spellings. Ethel and Edith trended for girls. For boys, names like Alfred, Alvin, Edmund, and Edwin all came roaring back.

You might think of a literary reference or two.

There’s Charles Dickens’ The Mystery of Edwin Drood. Published in 1870, the novel was Dickens’ last. Since it is a mystery, I’ll say no more about the plot.

For a more contemporary reference, Edwin Jarvis appears in the Marvel universe. Tony Stark named his AI assistant Jarvis in the Avengers movies. But Peggy Carter and Howard Stark work with the man himself, butler to the Stark family, and a key figure in young Tony’s life.

It’s often easy to miss an Edwin. They go by Eddie or Ed, and we assume they’re Edwards.

But a few come to mind. There’s astronomer Edwin Hubble, for whom the Hubble telescope is named.

And while we’re stargazing, let’s not forget Edwin Aldrin – better known as the astronaut Buzz Aldrin. As part of the Apollo 11 mission, he and Neil Armstrong became the first two humans to set foot on the moon.

But the reason the name might succeed today has little to do with any of that. Classic status is great, of course, as are accomplished namesakes.

But some of Edwin’s appeal likely comes down to the name’s second syllable.

To win is to be victorious. The word also has Old English roots, ultimately from a Germanic element. It means to strive and to struggle; to overcome.

Singer Chiara and football player Russell Wilson recently named their son Win – just Win. The name was give to six boys in 2018, so it’s quite rare – but not completely unknown.

The baby name Edwin offers an elegant compromise – it’s a classic name with deep roots, and literary and scientific associations. And yet, it also comes with a built-in nickname that fits with Ace and Legend and Maverick.

That makes Edwin among the most flexible of choices – a banker and a varsity athlete.

Despite the appeal of the baby name Edwin, it remains relatively rare today.

And yet, that’s far from obscure. It’s nicely positioned, somewhere between the classic and popular choices like Henry and Theodore and the more obscure Alfred and Harold.

If you’re after a versatile name that’s part-classic, part-cool, Edwin might be the surprise sleeper name for you.

Would you consider the baby name Edwin? What’s your favorite of the Ed names for boys?