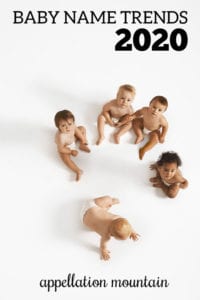 The new year is fresh and bright, so let’s talk about baby name trends 2020.

Because it’s not just the beginning of a new year. It’s the start of a decade. We’ve ended our last, as wild and tumultuous as they come. Some of these trends barrel into 2020 full steam, building from previous years. Others feel brand new for the decade ahead.

Here are my twenty picks for baby name trends 2020 – and beyond!

Two is the new one.

Your great-grandparents might not have had even one single middle name, but you almost certainly do. And your kids? They have at least one, I’m sure. Lately more and more children have two middles. Why? Sometimes it’s an extra honor name. Often it’s a second surname. Either way, the more common it becomes, the more parents are likely to see it as a road to compromise.

While fewer parents choose Ann or Lynn, those filler middles of an earlier generation, there’s always a name or two that feels like a default. They do serve a purpose, linking longer firsts and lasts. And plenty of us have a beloved grandmother named Rose (or Ann or …)

But lately a new pair of go-to middles is rising. First up? Mini Mae, sweetly vintage and nicely bright. More controversially? That would be James, one of the most traditional boy names, gaining steadily in use for girls. Just like Rose (and Grace and Mae) serve to feminize a more neutral first, James adds the opposite for frilly names. Riley Rose and Penelope James do sound exactly right, I think.

Cozy nicknames names are having a moment. In some cases, they’ve eclipsed their starchier formal versions. Archie ranks in the US Top 1000, but Archibald is still in hiding. Millie is a favorite, while Millicent remains in style limbo. And the same is true for Hattie and Harriet … at least for now. Blame it on Sadie, the name that helped kick-start the trend.

The Sarah-Sadie link is ancient history.

Speaking of Sadie, parents increasingly reject traditional nicknames. Sure, we’ll use Ben for Benjamin. But the nicknames that built up over generations of use, the linkages blurring over time? They’re a tougher sell. If parents can’t see how to get from Sarah to Sadie, they’re likely to stick with the cozy nickname and ditch the formal name.

At the same time, parents who do choose nicknames do so with less regard to tradition, too. Parents who love Polly might resist the idea of naming a daughter Mary – but would happily choose Penelope as a formal name. Or Paulina.

Announcing planned nicknames is a thing.

A few years ago, I would have said that nickname-proof choices would define the decade. And, to a large extent, they did. But lately I’m seeing the opposite trend. Parents announce their child’s full, formal name, along with the name they plan for daily use. In some cases, this might feel like the opposite of the  Sarah/Sadie trend above. (We’ll all received a birth announcement for a Margaret-called-Maisie, right?) But it’s also true that those planned nicknames can be thinly connected. Think of Kieran Culkin’s Kelsey “Zissou” Sioux. (Or Madonna’s Lourdes “Lola” – the celebrity baby name two decades ahead of the curve.)

Surnames are up for discussion.

This might be the most seismic of naming changes. For years, the entire family shared one surname – his. (At least in the US.) Even after women starting keeping their surnames in bigger numbers, their children tended to receive dad’s name, regardless of the couple’s marital status. It simply was – and remains – the default.

But it’s up for discussion lately, and that is noteworthy and new.

We’re reinventing family names as much as we’re handing them down.

Family names used to be about tradition. William Edward Smith VI and Mary Roosevelt Rothschild. Names conjured up esteemed ancestors, linking children to their past.

But reinventing family names opens the door to new possibilities. It considers both tradition and style, allowing family to honor their roots while also looking forward.

From Rocket to Psalm, parents are choosing names rich with meaning. And not subtle, you-only-know-if-you-know kind of meanings. The names carry inescapable images – though I suspect that, after a few weeks, Legend and Legacy are just two more kids on the playground. Of course, these names have the potential to become mainstream, and shed some of their surprise factor. Your faith may tell you there’s only one, but over 2,000 children were named Messiah in 2018 alone.

Wild word names are on the upswing, too.

Other words feel every bit as bold, but don’t point to faith or achievement in quite the same way. They feel like wild word names, hard to puzzle out why they’re on a birth certificate. Remember Cerie on 30 Rock musing about naming her kid Bookcase, Sandstorm, or Hat? I’ve yet to hear any of those names in real life. But the near-equivalents are appearing as names. Gravity. Glorious. Solstice. Chaos. Relic. There must be stories there.

I’m not always sure how to react to wild word names and purpose names. But here’s one of the baby name trends 2020 that I heartily applaud: more names feel truly unisex than ever before.

It really comes down to one factor: when parents hear that a name is sometimes used for girls, they shrug it off. That means names like Rowan and Charlie can be used in big numbers for boys and girls alike. Credit a generation who grew up with boy-Jordan and girl-Jordan, or maybe just an expanding pool of names that ensures most kids are one-of-one. Either way, it points to more freedom than ever before when naming a son.

Part of that freedom in naming boys? We’re continuing to embrace longer, softer names for our sons. Not so long ago, Caspian was left to fairytales. But now, with Sebastian and Elijah in the US Top 100, more elaborate and romantic choices are finding their places on the playground.

Boy names are every bit as trendy as girls.

There’s still some catching up to do, but lately, the data suggests that boys’ names are increasingly subject to trends. If you look at the Top Five names of the last century in the US, the girls’ list is ever-changing. The boys evolves slowly. Through the 1970s, only eight boy names made the Top Five. Nine new names joined the rotation over the next three decades. And since the year 2000? Seven additional names appeared. In comparison, about 30 girls’ names made the Top Five between 1919 and 1980. Only now does turnover look similar on both sides of the Top Five. The same thing is slowly happening across the list, with the name pool deepening and expanding for boys rapidly.

Ace is the new Jax.

We still love a short, brisk, ultra-modern boy name. Jax is giving way to Ace. Plenty of cool, short choices are rising, from nature names like Ridge to preppy hellraisers like Hayes. But it feels like those super-mini names occupy a special category, and there can only be so many of them. I’m watching Ace right now as a trendsetter in a growing category.

Epic boy names are mainstream, too.

When I first started hearing names like Legend, Messiah, and Maverick, I discouraged them. They were too much to live up to, names that worked as call-signs and alter-egos, but weren’t meant for kindergarten backpacks and future adults. Except. Now that Maverick is in the Top 100 – with lots of similar names following – I think all of those epic boy names might eventually feel as natural as River or Grace.

A new wave of revival names is here.

This is always happening, of course. Every decade or so, we usher in a new wave of once-fusty, now fresh vintage revival picks. Emma and Abigail have been around for a while. Evelyn, Charlotte, and Amelia can’t climb much higher. That means Josephine, Louisa, Vera, and more traditional girls’ names are rising. And on the edges? Names like Maxine, Winifred, and Harriet are ready for revival.

We’re ready for the next wave of color names, too.

Ruby, Rowan, and Scarlett dominated the last few decades, making red the #1 color for baby names. But now that’s changing. Navy is on the rise. (And classic blue is Pantone’s color of the year.) I think that could lead to a boom in names like Indigo and Sky. But there’s also no shortage of gorgeous green names, or other colorful choices. Lavender, Lilac, Onyx, Moss, and Teal all come to mind. Baby name trends 2020 seems likely to bring at least a few of these front and center.

Another set of surname names is set to replace Harper and Avery.

Madison faded. Taylor too. And now it’s time for yet another batch of surname names to march up the popularity charts. Everly is already soaring. But Bellamy, Palmer, Collins, Oakley, Blair, and Sutton are all having a good run, too.

The edges are farther, there’s more middle, and the top is shrinking.

We can all rattle off the shocking celebrity baby names of an earlier generation. Frank Zappa’s Dweezil and Moon Unit. Even Gwyneth Paltrow’s Apple and Jason Lee’s Pilot Inspektor are now teenagers. So is Suri Cruise.

Over the last dozen years plus, shocking celebrity baby names have come fast and furious. I mean – consider the Kardashians alone! So far this year, we’ve heard Raddix, Syx, and Epik. And it’s still January.

All those names at the edges serve a purpose, though. If celebs name their kids Ptolemy and Moroccan and Banjo, it stretches the definitions of what’s acceptable. It opens up the space for a little more risk in the names we give our own children. Our sons are Wells and Wilder, instead of William. Jasper, not James. And our daughters? Suddenly, Poppy and Ophelia and Alaia are just a little bit different. The middle of the name pool is wider and deeper than ever before.

Our heroes have shifted.

An earlier generation named their children for political heroes. Not so millennial parents.

It’s not that the idea of heroes is gone. Far from it. But the kinds of heroes? That’s completely new. We’ve embraced rock stars and star athletes. (Meet my sons, Hendrix and Baker.)

Fictional characters serve as heroic namesakes, too. But this part gets a little fuzzy. After all, the story can go either way. We started naming our sons Kylo after The Force Awakens, but those boys were nearly headed to kindergarten before we knew if he was a hero or a villain. Khaleesi and Atticus faced plot twists, too. And villains can be charismatic, even admirable in their own way, leaving parents to ponder whether they can use this bad guy name for a baby.

For years, the Top Ten – and even Top 100 – baby names in the US felt solidly Western European in origin. But that fails to reflect the richness of our heritages. And many, many children are part-Greek and part-Jamaican; Korean and English and Irish; Honduran as well as Scandinavian. James, Robert, and John, Mary, Susan, and Patricia are still great names. But we need – and we’re increasingly building – a pool of familiar choices that feel pan-global. They’re choices that feel authentic to our families, and our roots.

It’s easy to be dismissive of new names, the Jaydens and Arias and Aaliyahs. But if you look closely, I think you’ll find that these names make sense for many families. Innovation in naming is a positive – and powerful – trend, a way to capture the world as it exists now.

And there you have it – my twenty baby name trends 2020. Do you agree or disagree with any of these? What are you seeing? What have I missed?