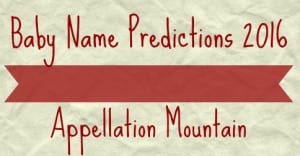 It’s that time of year again! Bring on the Baby Name Predictions 2016.

Because I love to check in and grade the prior year’s post, I do my best to come up with clear, objective predictions. That’s not always how we think about future trends, is it? So there’s some of both in this list.

If you’re looking for even more crystal-ball gazing, I had a chance to contribute to Nameberry’s 2016 Trend Report. (Longtime readers, can you guess which ones are mine? One feels so obviously mine that I almost pulled it from the list! But I think it’s legit, and Pam and Linda agreed, so it stayed.)

Read on for my list of lucky seven baby name predictions 2016! 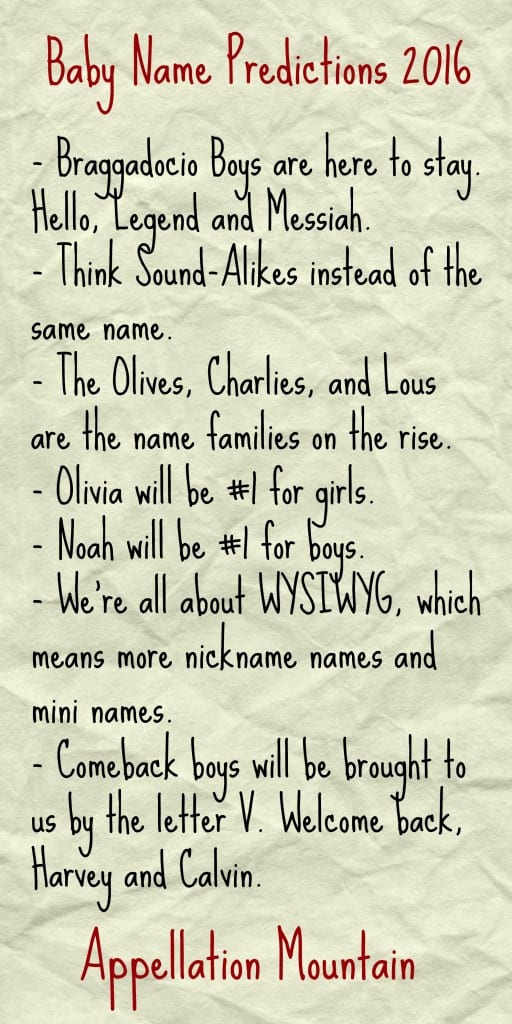 They’re not just for Kardashians.

Sure, Kim named her newborn son Saint, and Kourtney’s youngest answers to the regal Reign. But well before the reality family embraced the trend, plenty of parents were giving their sons bold, brash names.

Every one of these names for boys gained in 2014: Royal, Legend, Bodhi, Kingsley, Augustus, Maximus, Atlas, Ace, Ares, Stetson, Princeton, Odin, Sterling, Messiah, Maverick, and Blaise. Some of them feel more wearable than others. Blaise is more saintly than fiery, and Maverick and Messiah chart in the 200s – pretty much mainstream. Augustus and Maximus are big names, but they have friendly, accessible nicknames that offset their grandeur. Bodhi doesn’t seem all that out-there, but it’s just as significant a religious concept as Messiah. (Bode, the spelling used by Olympic champion Bode Miller, seems a little more wearable.)

When we see year-end data for 2015 and 2016, I think that many of these names will continue to gain in use. And we’ll also see more swaggering names on the rise, in categories ranging from mythological names to weaponry-related names to preppy hellraiser names.

A few I’ll be watching: Slade, Ruger, Noble, Wilder, and Thor. And maybe even Zeus.

Predictions 2016: Sound Alikes Instead of the Same Name

Ask me the hardest part about baby name predictions 2016, and I’ll answer without hesitation: the rapid rise of sound-alikes.

Today, parents often prefer not to duplicate names among their immediate circle – a far cry from the days when John and Mary were sometimes shared within the same family. We search out names that are not likely to be shared. But we’re not ready to name our kids Zarflox or J3c1nda, either.

So instead of a few names rising, we often see the rise of an entire family of similar-sounding names. Rowan, Ronan, Ronin, and Roman were all up in 2014 – different origins, nearly identical sounds.

This isn’t completely new. One hundred years ago, Louis for boys, and Louise, Lucille, and Lucy for girls were all Top 100 choices. More recently, Alexander, Alexandra, Alexis, and Alexa were all trending.

But here’s what’s different: parents are much quicker to say, “Oh, we love Zoe, but we can’t possibly use a Top 100 name. How about Zuri or Phoebe instead?” And countless online resources will help them come up with alternatives to Mason or Ava or whatever name strikes them as not different enough.

It fragments the hottest names into multiple versions, even though each appears like a single name at first glance. But if spellings and sounds are combined, it’s hard to argue that Aiden, Hayden, Braeden, and Jayden aren’t pretty much the same name.

Predictions 2016: Name Families on the Rise

Every year, it feels like there’s a name that’s splintered, and is rising in several forms. In years past, I’ve talked about Lily names and Cora names.

For my predictions 2016, I’m looking at three families, all classics: the Olives, the Charlies, and the Lous.

The Olives are interesting. Olivia has been a Top Ten name since 2001, but it’s still gaining. On the boys’ side, Oliver is also continuing to post gains. Alivia and Olive have long since followed them into wider use, along with Liv and Livia. At first I thought I’d missed this trend – surely the Olives had their moment back in 2007, when Olive first re-entered the US Top 1000.

But those numbers! Olivia only gained one place in rank, moving from the #3 name to the #2 name. But in terms of the raw number of girls named Olivia, that represented a gain of more than 1,000 births – a huge leap. Oliver, too, made major gains, with more than 2,000 additional births – the biggest increase for any Top 100 boy’s name.

As for the Charlies, there’s plenty of reason to think that 2016 could be their year. The arrival of Princess Charlotte in 2015 cemented Charlotte’s status as the feminine classic of the moment. Charlie might take the title for unisex name of the moment, a choice that seems to be rising for boys and girls in nearly equal numbers. (Though that’s before Charlee and Charleigh are added in.) There’s also the impact of the terrorist attacks on Paris-based satirical magazine Charlie Hebdo and the outpouring of support, with the hashtag and slogan Je suis Charlie. At the same time, Charles remains an impeccable classic for boys, Caroline is a Top 100 staple for girls, and I can even imagine Carl, Carla, and Carlotta as the next wave of names so uncool they’re cool again.

Lastly, I’m watching the Lous. Louisa re-entered the US Top 1000 in 2014. I think we could see a big jump for Louis in 2016, as well as Louise. Lu- names, like Lucy, Luke, and Lucia, are already gaining, so there’s really no reason to think that the more buttoned-up Lous won’t do the same. One more reason to believe in the Lous? As I mentioned above, it’s been a century since they were in the spotlight, which is usually exactly the amount of time required for names to feel fresh again.

Predictions 2016: Olivia Will Be The New #1 Name for Girls

Predicting new #1 names is a tricky business. I don’t think I’ve ever gotten it right!

I’m basing my prediction on a few things:

One note: my model for The Rise of a Number One Name says that Olivia has already missed her window! We’ll see what’s right – my model or my hunch!

I expect we’ll see strong gains by Charlotte, Harper, and Evelyn. I’d be surprised if Harper doesn’t crack the Top Ten. For falling names, I’d guess Isabella, Emily, and Sophia will all drop, and I’d call Abigail and Madison the most likely to leave the Top Ten.

Hazel and Cora are my top choices to enter the Top 100.

In years past, I predicted the downfall of Jacob, and then Noah. I was convinced Mason would make it to the top spot, or possibly Liam.

Now? Noah may have more staying power than I once thought. It’s also true that:

For boys’ names likely to leave the Top Ten, it might be time to say good-bye to Ethan. One bright note for parents worried about girls named James is this: I expect we’ll see James remain in the Top Ten, and possibly gain a place or two.

I’m also looking for strong gains by Lincoln, Luke, and Oliver. I’m watching Ezra, Harrison, and Theodore as names likely to move into the US Top 100.

Predictions 2016: We’re All About WYSIWYG

I’m a believer in names with rich nickname possibilities. But that’s not necessarily the dominant opinion. In fact, it seems like more parents are gravitating towards WYSIWYG – What You See Is What You Get – when it comes to baby names.

What make a WYSIWYG name?

Of course, another part of the WYSIWYG trend is harder to see. Parents sometimes choose names that could easily be reduced – but prefer to use the name in full. I know kids who are Isabella-not-Bella, Sebastian-not-Seb, Katherine-not-Kate, and William-not-Billy.

WYSIWYG fits with a culture that’s increasingly informal. I also suspect it’s database driven. While it’s not a huge headache to explain that you prefer Abby to Abigail, there’s a simplicity to using the same name everywhere, being just Sam or just Ella on your passport and in conversation.

Predictions 2016: Comeback Boys Brought to You By the Letter V

Not so long ago, it was the letter ‘x’ fueling the rise of once-fusty names. Hello, Felix and Dexter, Xavier and Max. Not one, but two of the Jolie-Pitt boy names – Maddox and Knox – became sensations. And while ‘x’ remains quite stylish, it’s not the letter driving unexpected comebacks anymore.

No, that distinction belongs to the letter v. In 2014, the following names were all up: Calvin, Harvey, Alvin, Ivan, Marvin, and Oliver. The more modern Everett, Sullivan, Donovan, and River gained, too.

I think Calvin and Harvey are the two comeback boys to watch closely in 2016.

That’s all the crystal ball has for today! I’d love to hear the trends you’re watching. And I’ll soon be sharing my post on the names I’m watching – I used to include it with the predictions, but it’s grown so big it needs a separate post.