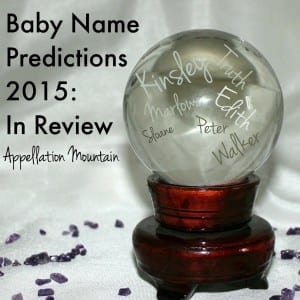 Without any further ado, let’s take a look at the baby name predictions I made for 2015, and see which ones came true!

The Triumphant Return of Peter

I’ve been waiting for the return of Peter for a while now, and I thought this would be the year, what with live Peter Pan closing out 2014 and the big screen Pan opening up over the summer of 2015. Plus, plenty of parents love Henry and Oliver but want something a little less popular – queue Peter. It’s a name as storybook as Jack, as Biblical as Noah. Plus, Peter has that great ‘r’ ending of Carter and Asher and so many others, and The Hunger Games gave us handsome heroic and similar-sounding Peeta.

So while Monroe remains worth watching, it’s too soon to say that it’s ready to join Everly and Olive on the names-launched-by-celebs roster.

Marlowe is the New Harper

I called Marlowe the new Harper for 2015. Here’s the thing: I still think I’m right. But I also think I was a little early with this call. While Marlowe gained again last year, the name remains outside of the US Top 1000 – for now. I’m confident we’ll see this one debut when the new data is released in May 2016.

Dominant spellings – the spelling most common at any given point in time – change, for lots of reasons. Kaitlyn replaced Caitlin. Zoey eclipsed Zoe. Annabel was once most common, but today it’s Annabelle.

In recent years, I’ve been watching Sofia and Sophia, as well as Jaxon, Jaxson, and Jaxson. But for 2015, I was banking on the French Vivienne eclipsing the more familiar Vivian. It didn’t quite happen. Both names are climbing, and Vivienne seems to catching up. It’s also slightly more popular on Nameberry, which is often a good indicator of rising popularity. And yet, it just plain didn’t happen.

I’m not entirely certain what to make of this trend. In general, it’s the way of baby naming in recent decades. We no longer have trendy names as much as we have trendy sounds. Because as soon as a name becomes popular, parents seek out something a little bit different.

Names containing ‘ken’ and ‘kin’ have had a good run, with Mckenna and Mackenzie becoming names of the decade, especially if you tally up all of the possible spellings. Kendall and Kennedy followed.

In 2014, the majority of the ‘ken’ and ‘kin’ names tumbled. And yet, names like Kenzie, Kensley, Kenna, Kinsley, and McKinley were up for girls – just as I predicted last year, along with Brecken, Anakin, and all of those King- names for boys. (Though I think the sound in Kingston and Kingsley is different enough that I’m not sure it counts.)

That almost makes this a hit – and yet, I think it’s too fuzzy to say that the ‘kin’ and ‘ken’ names are still truly current. Many of them are holding on, and there’s still some innovation. But overall, I suspect this sound is finally starting to slide.

The Coras are Coming

The Coras are here! Thanks to influences as diverse as Coraline and Downton Abbey, Cor- seemed like the can’t-miss sound of the moment. The numbers proved me right on this one. Cora climbed from #127 to #103. (Though that’s just outside of the US Top 100 – and I was sure it would get there!) Coraline climbed more than 80 places, and Corinne rose, too. Cordelia finally returned to the US Top 1000, after many years’ absence.

This trend isn’t just for girls, either. Corbin was up, too.

Edith is the Girl’s Name Out of the Attic

Here’s what I wrote last year: Up until 2008, Edith was falling. Edith was your grandmother, or maybe the sweet little old lady across the street. But Edith just plain wasn’t a baby. It was too fusty to consider.

Thanks to an eclectic mix of influences – from Despicable Me to Downton Abbey – combined with possible short form Edie, Edith feels fresh again. We’re remembering that it’s literary (think Wharton) and enduring, too. I predicted a “good-sized jump” for the name, and I think the numbers reflect this. Edith ranked #719 in 2013, and climbed to #627 in 2014. This is definitely a vintage name in the midst of a comeback.

I called S the letter to watch for girls in 2015, and the numbers say that this is a win. Sutton, Sloane, and Sloan all rose, as did Sawyer – over 100 spots for girls, plus ten places for boys. Spencer is up slightly for both, and Scout is just outside the US Top 1000 for girls – yet another To Kill a Mockingird name.

It was an equally accurate prediction for boys – Walker, Wesley, and Weston were all up, along with outside the Top 1000 Wilder, Wells, and Winslow. One surprise? Walton remains almost completely unused.

Before I looked at the numbers, I expected this to be a Miss, or at least a Maybe.

I should have more faith in my prognostications, because True and family are undeniably on the rise. Let’s look at the numbers:

Truman also gained slightly. And while some forms of the name showed a decrease, overall these names increased in use. I think it’s just enough to call True a family of virtue names to watch.

Lucas and Luke were both up, while Julian remained flat. Lucy and Ruby gained for girls. So did Luna, June, and Juniper; Luca, Judah, and Louis.

While not every oo-sounding name is fashionable, it’s definitely the upcoming vowel sound of the moment.

Overall, I don’t think any of these predictions was an absolute, what-were-you-thinking flop. But I continue to realize just how darn hard it is to categories a prediction as a hit, miss, or maybe! What do you think? Do you agree with my assessment of the hits and misses?