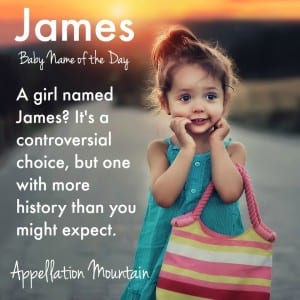 James for a girl is one of the more controversial choices in baby naming today.

Thanks to Angela for suggesting our Baby Name of the Day.

James is a masculine staple. It’s Biblical, worn by saints and kings and men of distinction throughout the years.

Many borrowed-from-the-boys names are newer possibilities, surname names or word names that can’t claim the pedigree of James. A girl named Ryan or River? Why not?

But a girl named James is a surprise.

THE FEMININE FORM IS …

The feminine form could be:

Etta James was born Jamesetta. Jamesina is sometimes seen, too.

The go-to girl version appears to be Jamie, along the lines of Billie and Bobbie. In the late nineteenth and early twentieth centuries, a child named Jamie was probably a girl.

Or maybe the feminine form was … James.

Because here’s an interesting thing: the Social Security Administration indicates that women were named James in steady numbers from 1880 through the 1980s. Some of those could be errors, of course – hard-to-read handwriting, checking the wrong box.

Jamie really caught on in the 1970s, boosted by The Bionic Woman and the popularity of the similar Amy. The unisex spelling used for The Bionic Woman – Jaime – skyrocketed to #29 for girls in the US in 1976, the year the television show debuted.

Then came Mad About You, in 1992. Jamie Buckman’s nickname? James.

Early in her career, model-actress Jaime King was known as James – but she’s since given her nickname to her son, James Knight, and gone back to Jaime.

Since James is a sometimes-surname, so isn’t unusual to meet a woman with the middle name, either a maiden name moved to the middle or a family name.

In recent years, it has become a stylish choice for girls: 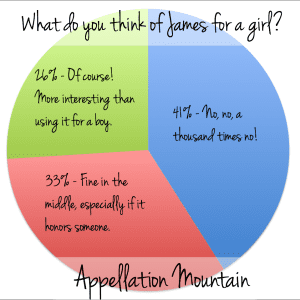 Blake Lively and Ryan Reynolds welcomed their first daughter in late 2014, but kept her name under wraps for months. When they finally revealed the name – James! – many reacted negatively.

The site poll saw 41% of readers giving James for a girl a definite no.

But tally up the other two responses. One-third said it’s fine in the middle. And 26% liked the idea of James as a girls’ name.

It makes me think that the Lively-Reynolds baby may inspire more parents to consider James a possibility for a daughter.

Blake has since commented that it’s a family name, and since her name is traditionally masculine, it felt right to stick with the pattern for her own daughter.

Here’s guessing that more and more families – maybe those who want to honor a loved one with the name – will see this as a more wearable possibility for a daughter. Especially given the nickname option Jamie, James for a girl seems likely to catch on.

In 2017, 77 girls were given the name. But by 2018, that was back down to 44. Still, it feels like we’re hearing James for a girl in the middle spot more and more often. So maybe that’s really the change.

What do you think of James for a girl? Do you feel differently if it’s a middle name? 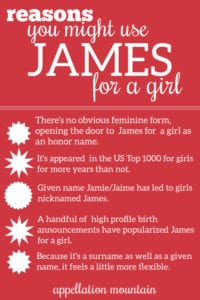