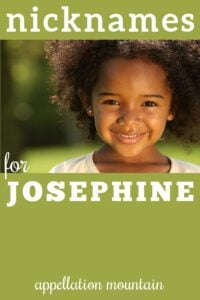 But nicknames can add some versatility, helping your daughter transform her name to better fit her personality. They can help transition from childhood to adult.

And if you happen to be one of two or more Josephines? These nicknames might take you back to being the only one with your name again.

Possibilities abound. From the obvious to the well-why-not, let’s look at the best of the Josephine nicknames.

Some of the most interesting Josephine nicknames come from the F sound in the name’s final syllable. If Fee can be short for Fiona, surely Fifi works for Josephine? And it’s a very French nickname, mais oui!

If Fifi is French, Fina feels more Spanish. That’s because Josephine becomes Josefina in Spanish – but also in Swedish. Slavic languages often use Jozefina. There’s no reason Fina – or Phina – couldn’t work for Josephine, too.

Love the idea of a boyish nickname in the key of Joey, but want something a little more modern? In many ways, Finn is the modern answer to Jo. Finn might feel like a stretch from Josephine, but the sounds are all but there.

While it stands on its own – think Ina Garten – it also works for any name ending with -ina or -ine.

Originally a masculine nickname for Joseph, Jodie – pick your spelling – has long been a unisex option. It’s a little bit of a 1970s throwback.

We all know Alexandra called Alex and Charlotte called Charlie, so Josephine called Joey seems logical, too. If you grew up with Dawson’s Creek, you’ll remember the show’s Joey – Josephine Lillian Potter, played by a young Katie Holmes.

American parents likely see this as a separate name, but in French, Josette is short for Josephine.

Take the Jos from Josephine, change the o-like-go to an o-like-moss, and you have one of those great unexpected Josephine nicknames.

Poetic and pan-botanical Posy seems like a stretch from Josephine. But consider Pepe, the well-known diminutive for the Spanish form of the name, José. In Italian, Josephine becomes Giuseppina. Take the Jos, swap the ‘J’ for a ‘P’ and there you have it.

As for the spellings, a posy is a small bouquet of flowers, or a sentimental line of verse. Poesy also refers to poetry. The most popular spelling of them all? Posie.

Stephanie shortens to Steffie. So why not Josephine called Sephie? The sound makes sense.

An independent name, Sophie isn’t usually connected to Josephine. But the sounds are all htere.

Kyra Sedgwick and Kevin Bacon gave this name to their daughter way back in 1992. But what does Sosie mean, and where did it come from? It’s unclear, but Sosie might be short for any of the Susan names, or maybe Sophia. But it also qualifies as one of the unexpected Josephine nicknames.

What’s your favorite of the Josephine nicknames? Are there others I missed? 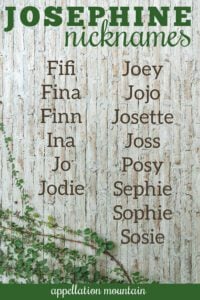 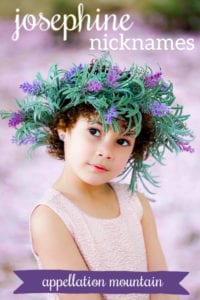