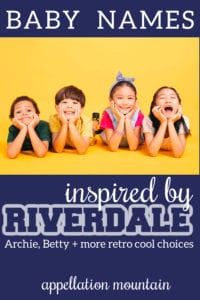 Odds are you’ll recognize some of the Riverdale baby names, even if you’ve never picked up an Archie comic.

A few of the characters debuted way back in 1941: Archibald “Chick” Andrews, Betty Cooper, and Jughead Jones. Chick became Archie early on, and the entire series – originally called Pep Comics – changed its name to Archie Comics, matching the character that would define the series for eight decades and counting.

The original characters’ names reflect the era. Sort of. Archibald has always been rare, though Archie ranked in the Top 200 around the time the original high school character would’ve been born.

Veronica, too, was in use, though not wildly common.

Betty, though? A Top Ten favorite in the era, and that’s not counting all the Elizabeths who were probably Betty for daily use, just like the one on Riverdale.

The characters have been recycled and rebooted, branched out into their own spin-offs, and more over the years. But the names remain, cycling in and out of favor as their storylines adapt to changing times.

The new series debuted in 2017, so it’s possible we’re already seeing some impact from names features on the series.

Let’s take a look at the characters who might inspire a new wave of Riverdale baby names.

We tend to give credit to Harry and Meghan’s young son for this name’s revival. Except nickname-name returned to the US Top 1000 in 2018 – a year before Archie Harrison Mountbatten-Windsor’s headline-grabbing birth. This is one name that Riverdale almost certainly gets credit for, the kind-hearted football player and musician who found his way into plenty of drama from the very start.

The father of main character Betty, Harold “Hal” Cooper doesn’t exactly prove himself a role model. But his name is pitch perfect for a teenager’s dad circa 1940-something. Harold was a Top 20 standard in the early twentieth century. Today it’s one of those grandpa names just waiting to be rediscovered.

One of many Old Testament names rediscovered post-Protestant Reformation, Hiram saw steady, but declining, use through the 1970s. From day one, Hiram Lodge is wealthy. Riverdale makes him ruthless, and gives him a hardscrabble backstory to explain it. While anything can happen, Hiram remains under-the-radar for now.

If you’re thinking Kevin doesn’t sound anything like Archie and Betty, you’re right. The character Kevin Keller was introduced in the year 2010. His dad was the sheriff – also true on Riverdale. And he’s been a popular addition to the comics, in part as the first openly gay character in the Archieverse. But no matter how successful the series becomes, the baby name Kevin is on a downslide – it peaked in the 1970s.

Another nickname name like Archie, Reggie is from Reginald Mantle. He’s affluent and athletic in the comics, and he’s captain of the football team when Riverdale begins. As names go, Reggie hasn’t cracked the US Top 1000 since the early 1990s, though Reginald remains just inside the Top 1000 – and might be an alternative to names like Sebastian and Benedict.

Waldo is the given name of Mr. Weatherbee, the principal of Riverdale High. Like so many names on this list, it would’ve been different but not unknown when the comics were first penned. Today, though? Waldo belongs almost exclusively to a fictional character wearing red-and-white stripes. Still, it could be a name so far out that it’s in, particularly thanks to the link to Ralph Waldo Emerson.

The girl next door, popular and blonde Betty grew up as Archie’s best friend. In the comics, she’s smart and sunshine-y. She and Veronica are also close, though they compete for Archie’s affections. Things take a darker turn on Riverdale, but Betty remains at the heart of the story. The series uses her full name – Elizabeth – interchangeably with her nickname. But in the US, Elizabeth is the most evergreen of girl names while Betty has languished in style limbo. Despite Riverdale – and a Taylor Swift song! – Betty has yet to show signs of revival.

An early twentieth-century invention, Cheryl owes a little to the French term of endearment cherie, and something to Charlotte, too. A Top 100 favorite from the 1940s into the 70s, it’s a plausible name for character Cheryl Blossom – but in makes particular sense knowing that she was first introduced in 1982. She’s at the heart of the drama in Riverdale’s first season, but it hasn’t heralded an early return to popularity for this name.

While Evelyn is back – in a big way – the name’s rise predates the rise of Riverdale. She’s not a main character, though her name is fascinating: Evelyn Evernever. Originally introduced in the Little Archie comics in the 1950s, we meet her as an elementary school-aged classmate of the equally young Archie, Betty, and the gang. Her Riverdale story is completely different.

Peak Geraldine was around the 1930s, making this a reasonable name for a character in the original series. But it’s quite the surprise for a late 20-something Riverdale High teacher in the series. We later learn her real name is the far more era-appropriate Jennifer. And in the comics? She was a gray-haired matron of a certain age, no-nonsense and respected by her students.

Up until now, an entire generation automatically added “Granger” to Hermione. But the Archieverse character reminds us that there have always been other women by the name. When Riverdale begins, Hermione is the estranged wife of Hiram Lodge and mother to Veronica. There’s been a modest uptick in the name’s use, too, reaching an all-time high of 89 girls in 2019. Could Mrs. Lodge be just enough to help this name leave Hogwarts behind?

One of the many Archie spinoffs is Josie and the Pussycats, a story about an all-girl rock band. The cartoon version sent them touring in outer space, but Riverdale keeps them firmly earth-bound. Her full name is Josephine, after the dancer, actor, and activist Josephine Baker. Her character left Riverdale for New York City as part of the short-lived Katy Keene spinoff.

Midge Klump debuted back in 1951, another character name that sounds surprising on a high schooler today. But the character made her way to Riverdale, name unchanged. As a given name, Midge has effectively been extinct since the early 1970s. But this was almost always a nickname anyway, short for Margaret or Miriam or some other traditional M name for a daughter. And maybe – just maybe – it will show some signs of revival. Besides Riverdale, it’s the nickname of The Marvelous Mrs. Maisel.

Already a fast-rising favorite when Riverdale debuted, Penelope required no boost from the series. On the show, she’s Cheryl’s mother. The television character is very different from the comic book one. Either way, the name fits – a little offbeat and unexpected, just like Archie and Midge and the rest of the gang. However, the Blossoms were introduced in the 1980s, so it’s not quite from the same era – though it blends right in.

Betty’s big sis answers to another vintage nickname name. We love Molly and lots of girl names starting with P, but somehow Polly remains overlooked. The Riverdale character is probably too minor to move the needle much, but maybe it influenced a family or two. Fun fact: in both the comics and the show, Polly has two children: Juniper and Dagwood.

Okay, Sabrina Spellman hasn’t actually appeared in Riverdale – yet. But rumors of a crossover or visit from the Archieverse character are constant. Sabrina first appeared in a 1962 storyline, but she quickly became popular enough to have her own adventures – including a recent Netflix series.

Short for Antoinette, it’s a name that sounds like it comes from an earlier era. (And it does! Toni peaked around 1960; Antoinette earlier in the twentieth century.) But Toni Topaz joined the comics as a love interest for Jughead in the 2010s. In the series, though, she ends up dating Cheryl instead.

Along with Archie, Veronica could be one of the names poised to benefit from Riverdale exposure. Despite tumbling from a 1970s + 80s high in the Top 100, Veronica seems to have inched up – just a tiny bit – since the series’ debut. After all, Veronica is one of the main characters. Even if you’ve never seen the show, odds are you know a little bit about the whole Archie-Betty-Veronica struggle.

It’s impossible to watch the show and not know Jughead Jones, sometimes called just Jug, for short. But do you know his real name?

And when we meet his sister, Jellybean? She’s actually Forsythia.

What are your favorite Riverdale baby names? Do you think any of these will catch on thanks to the series?