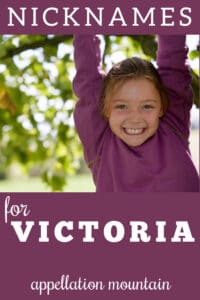 Looking for unexpected Victoria nicknames? This list is for you!

Regal and elaborate, Victoria entered the US Top 100 way back in 1967. It’s ranked in the Top 100 every year since then, with the exception of 1977 – 1980, when it hovered just outside. Victoria brings to mind so many associations, from the long-reigning Queen of England to a villainous vampire in Twilight.

It’s a name equally likely to belong to mother or daughter, and one that could easily go back many generations more.

The default nickname tends to be Vicky. Or Vicki – choose your spelling.

Other nicknames belong to a single person. Victoria Beckham is Posh Spice; way back when a young Queen Victoria ascended to the throne, Her Majesty was called Little Vic by court gossips. (She’d pick up dozens of nicknames across her long reign, though few were related to her given name.) Victoria Woodhull, an American suffragist and the first woman to run for president in the US, was called Notorious Victoria.

Masculine form Victor has never been quite as popular, at least in the US. A handful of these might be masculine nicknames, too.

International variations of the name Victoria could offer even more options, like the Polish Wiktoria, Italian Vittoria, and French Victoire. Viktorka is used in Czech and other Slavic languages, where the formal version is Viktorie or Viktoriya.

But this list focuses on unique nicknames that feel at-home in the English-speaking world. Some are inspired by famous people who have answered to Victoria over the years. Others are borrowed from the sounds and letters in the name.

If you love this traditional name, but aren’t sure about it’s popularity, then this list might give you the best of both worlds. Unexpected Victoria nicknames abound, and could update this classic in surprising ways.

The sounds are all there – a strong C and the obvious ‘or,” though it feels like a stretch to shorten Victoria to Cora.

Cori, on the other hand, feels like a hop and skip from popular nickname Tory.

British writer Plum Sykes answers to this unusual nickname for Victoria. It comes from a type of English plum, named for the queen – which takes this one full circle. Plum can mean something desirable or highly valued, too, which puts this name almost in the modern virtue names category. As an independent given name, Plum feels exceedingly rare, which makes it ideal for unexpected Victoria nicknames. It’s possible this wears better in the United Kingdom than the United States, but it has potential anywhere.

Here’s another English monarch-inspired choice: Queenie. If you were born during the long reign of Queen Victoria and shared her name, this probably made a logical short form. All these years later – and in the US, of course – the connection to royalty might feel far less obvious. Then again, Queen Victoria remains broadly familiar. Perhaps even more so following the ITV/PBS series about the young queen’s early life.

There’s Mia and Leah, so why not Ria? Sure, the mythological name is Rhea, and that’s the spelling favored by actor Perlman, too. But Ria comes from the end of Victoria, an obvious option for someone after unexpected Victoria nicknames that feel brief and modern.

Boyish and upbeat, Rory works with a long list of classic girl names. Among them? Victoria, of course! With a strong -or sound, Rory feels like a natural choice for a Victoria after something breezy and truly unexpected.

It’s the Spanish word for aunt, but, like Ria, it’s easy to imagine Tia serving as a nickname for Victoria.

This makes this list thanks to Princess Helena Victoria of Schleswig-Holstein, one of Queen Victoria’s many granddaughters. Her family called her Thora. While the sound isn’t quite there – and Thora comes from Thor, Norse god of thunder, it’s close enough to consider.

Tollie rhymes with Molly, and if we can get Dolly from Dorothy, why not Tollie from Victoria? In this case, it’s inspired by a Swedish actress. It’s possible it’s heard only in Scandinavia – and perhaps only in small numbers there. Still, it’s an intriguing option. (Fun fact: Princess Victoria is the current crown princess and heir to the throne in Sweden, so the world may have another reigning Queen Victoria before too long.)

It might seem a little abrupt for a baby girl, but it’s a brisk, bright possibility that could wear well on an older Victoria. Reducing the elaborate, feminine choice to just the middle syllable makes it feel fresh and modern.

There’s something delightful about Tori. Nicknames can come from the middle of names, too? While it’s not exactly the most unexpected Victoria nickname, it’s also not Vicky. Actor-turned-reality-show-darling Tori Spelling and Victorious’ Tori Vega have made it a familiar substitute for Vicky.

Drop the Vic and Toria is as wearable as Elizabeth’s Eliza.

Used among Spanish-speaking families, Toya follows logically from rushing together the sounds of Victoria.

Pronounce it Vee Cee and spell it … VC, Veci, or maybe Vici? The options are many, but the idea is simple: Take the first initial and that stressed middle C to reduce elegant Victoria to a short, sporty name.

One of the sleekest ways to shorten a name is to reduce it to just one letter. Katherine becomes Kay, James becomes Jay, and Victoria? How ’bout just Vee? It’s a mini name that might appeal to many, and it’s easy to imagine Vee evolving naturally for a no-nonsense Victoria.

Contract the first and last two letters, and you’ll arrive at this possible Victoria short form. The downsides: Via means “by way of.” We walk to school via the path. She sent the documents via courier. And in Spanish, via actually means street. So … it’s not immediately a name. And yet, in our age of Mia – and Ria! – why not? Fictional characters give Via a boost, too. It’s the sister’s name in young adult novel Wonder – though she’s Olivia. It’s a good nickname for Victoria, too.

Most Slavic languages spell this name Viktoria, and use contracted form Vika for short. While it’s virtually unheard of in the US, it makes sense. Though given the popularity of Victoria-with-a-c, Vica might be the more obvious spelling.

In Roman mythology, Victoria served as the goddess of victory. Like the Greek Nike, she personified the ideal of triumph. While Victory feels more like a word name than a nickname, it’s easy to imagine the right kind of Victoria choosing this as a (somewhat) short form.

Vintage Vera has climbed the US popularity charts at a steady clip over the last decade. While there’s no link between Victoria and Vera, it’s tempting to consider Vira as another contracted form of the name. The ‘i’ spelling is used in at least some Slavic-speaking countries, and has a history of use in the US, too.

English writer Vita Sackville-West makes this one of the most appealing of the options. Yet another contracted form of Victoria, Vita also brings to mind the Latin word for life.

We love X-ending names for boys. But they’re options for our girls, too. There’s Bex for Rebecca and Lex for Alexandra. So why not Vix for Victoria? American medicine manufacturer Vicks is a household name, but somehow it still feels like Vix fits the creative nicknames on this list. If short names like Quinn and Sloane appeal to you, then Victoria-called-Vix could be the best of both worlds.

What are your favorite Victoria nicknames? 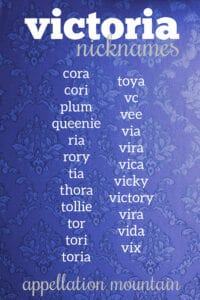 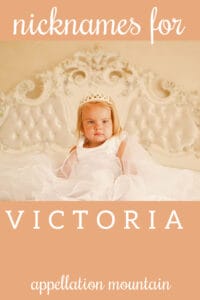