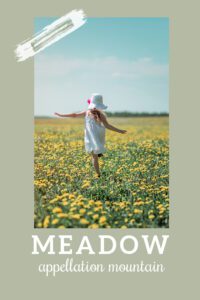 The baby name Meadow sounds very peace and love. But it got its big boost from a hit series about organized crime.

Like so many twenty-first century favorites, the baby name Meadow started out as a noun.

It comes from an Old English word referring to a tract of land, a pasture or a field. They’re often a mix of grass and wildflowers. So while not every meadow is picturesque, we tend to think of them as quite pretty. Plenty of attractive landscape paintings and photographs depict meadows from all over the world.

No surprise, then, than the baby name Meadow – just like other nature names – occasionally surfaces in the US popularity data over the years.

Six girls were named Meadow way back in 1914.

Others – male and female – appear in US Census records across the decades. Meadow and Meadows are sometimes heard as surnames, which may have influenced the name’s use.

But it remained rare. In 1969, another six girls were given the baby name Meadow. Of course, 1969 was the summer of Woodstock, and the following years saw plenty of hippie influence in naming. Autumn, Chance, and Ebony were all fast-rising names in the era that share a little something in common with Meadow.

The baby name Meadow, though, didn’t catch on.

In fact, it fell almost entirely out of use during the 1980s.

In 1998, even as plenty of other noun names caught on, just 17 girls were named Meadow.

The world met Meadow Mariangela Soprano in 1999, a member of the family at the heart of The Sopranos.

Fictional mobster-in-therapy Tony Soprano and wife Carmela are the parents to Meadow and Anthony Jr – AJ.

A high school student when the series began, Meadow Soprano was wealthy, indulged, and a little out-of-control early seasons. She clearly knew all about the family business. In fact, one of her boyfriends met an untimely fate thanks to his involvement in all things criminal.

Eventually, Meadow turned things around. By the series’ end, she was headed for law school.

Along the way, The Sopranos became a massive cultural phenomenon. Back then, most hit series still aired on network television, and HBO was new to the space. But it racked up 111 Emmy nominations, including 21 wins, over its six seasons. In 2004, it became the first cable series to win the Primetime Emmy for an Outstanding Drama Series.

It also pushed the baby name Meadow into the US Top 1000.

Incidentally, the show never explains why Tony and Carmela chose the name. It nods to New Jersey. The Meadowlands refers to wetlands in the northeastern part of the state … as well as the large sports complex located there. Maybe it’s meant to show Tony’s softer side. It’s also said that series creator David Chase once met a waitress named Meadow and just plain like the name.

No matter what helped put the baby name Meadow in the spotlight, parents responded.

After all, two trends meet in this name.

We’re naming our children River and Lily and Skye. It’s the golden age of nature names.

And girl names ending with o are hot, too, from Margot to Cleo to Harlow.

The baby name Meadow succeeds by blending a gentle, even pastoral energy with the modern o-ending sound.

If you’re after a girl’s name that feels substantial but new, Meadow might be the perfect choice.

What do you think of the baby name Meadow? 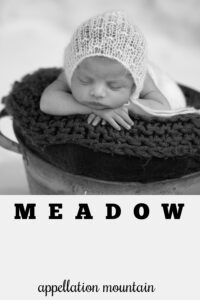