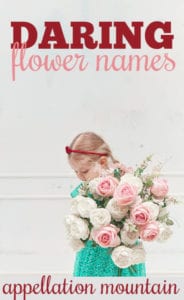 Flower names are nothing new. Girls have been named from the garden for generations. Plenty of traditional choices have floral ties – think of Shoshannah or Marguerite.

This list looks at flower names from the second category. If you’re after an uncommon name, a favorite flower might be the perfect choice.

We all know girls called Daisy and Violet, so we’re generally accepting of botanical choices.  Chances are that it will be relatively easy to spell and pronounce.  But most of the names on this list are far from common – many have never appeared in the US Top 1000.

Or look for a bloom that’s relatively rare as a given name.  There’s no shortage of possibilities!

Dahlia – Top Chef’s Gail Simmons chose this name for her daughter, inspired by her favorite flower, one that she used for her 2008 wedding to Jeremy Abrams.  The name is more popular today than ever, but with figures like fictional Aunt Dahlia, from the Jeeves and Wooster stories by P.G. Wodehouse, it is easy to see this one as an antique revival.

Hazel – When this list was first written, based on 2013 data, Hazel still seemed a little bit different. But as of 2018, the name ranked #42. Proof that rare flower names can become mainstream favorites!

Iris – The Goo Goo Dolls scored a huge hit with “Iris” in 1998. The came the 2001 biopic Iris, starring Jim Broadbent, Judi Dench, and Kate Winslet – and earning all three of them Oscar nominations. Today Iris has climbed to #138, but remains just different enough.

Ivy – Another of the vintage flower names that’s back in a big way, Ivy ranks #86 as of 2018. Like Hazel, it’s now too popular to count as rare! It speaks to our love of nature names, but also our affection for mini names and the middle v.

Magnolia – An unconventional way to get to the nickname Maggie, look no further than Magnolia.  In 2013, Magnolia re-entered the US Top 1000 – could this be the next Willow?

Poppy – The red poppy is a powerful symbol of remembrance for those who lost their lives in war. After many years’ popularity in the UK, it’s recently started gaining in the US, too.

Azelie – The French form of Azalea might have more history. Marie-Azelie Martin was the mother of the future Saint Therese de Lisieux, known as Zelie. Madame Martin was canonized in 2015, along with her husband, Louis. The name might come from Azalaïs, a medieval cousin to Adelaide. The French translation for the flower today is azalée.

Azucena – A Spanish cousin of Shoshannah and Susan, Azucena means lily.  It was the name of a famous Venezuelan televnovela in the 1980s, and long before, the name of a character in Verdi’s Il trovatore.

Briallen – Daring nature names can be found in many a language. Briallen comes from the Welsh word for primrose.

Millaray – It looks like a Milla-Ray smoosh, but this name comes from an indigenous language, spoken in South America.  It means golden flower, it’s big in Chile.

Sakura – The Japanese name for cherry blossoms, rich with symbolism, and very wearable, maybe even for a child without ties to Japan.

Yasmin – Jasmine remains very popular, while the Arabic original – Yasmin – has long been in her shadow.

Abelia – Honeysuckle might be too daring, even for the most out-there namer.  But Abelia, the scientific name for some members of the family, has possibilities. Named for Clarke Abel, an early nineteenth century naturalist, Abelia sounds like the popular Amelia, and shortens to Abby.

Amaryllis – A long and frilly for an equally elaborate bloom, Amaryllis would shorten nicely, to Amy, Mara, or Rilla.

Anemone – In Finding Nemo, the little clownfish stumbles over this word – though he’s referring to a sea anemone, a reef-dwelling sea creature.  The aquatic version takes its name from the flower, and the flower name comes from the Greek “daughter of the wind.”

Anthea – More of a pan-botanical than a daring flower name, Anthea simply means “blossom” in Greek, and has a respectable history as a girl’s given name.  My favorite find?  A botanist named Anthea Phillips who specializes in the plants of Borneo.

Aven – Gossip Girl alum Matthew Settle gave this name to his daughter.  It looks like an Ava-Aiden smoosh, but Aven is a wildflower.

Azalea – Azalea sounds like a girl’s given name in the twenty-first century, at home with so many A-a names, from Amelia to Aurora. It cracked the US Top 1000 in 2012, and now stands at #510.

Bluebell – It seemed extreme when Spice Girl Geri Haliwell named her daughter Bluebell Madonna. But in our age of Blue Ivy and so many colorful names, it might fit in nicely.

Briony – Atonement, Ian McEwan’s 2001 novel, gave this name to the child narrator. Saoirse Ronan earned an Oscar nomination as the 13-year old Briony in the 2007 big screen adaptation. Also spelled Bryony, this name got a boost from the book and movie, but neither really caught on in the US.

Calantha, Calanthe – Calanthe is a type of orchid.  In Greek, the name means “beautiful flower.”  Calantha and even Calanthia have been seen as forms of the name, but all three are rare – though they’re also pretty wearable.

Calla – You could go with Calla Lily, to reinforce this name’s botanical origins.  But Calla – from the Greek word for beautiful – stands on its own nicely in our Ella-Stella age.

Camellia – Camille and Camila are traditional names with roots in ancient Rome. Floral Camellia feels like a wearable possibility for a daughter.

Clover – Could any name be luckier? In our age of Harper, Piper, and other ends-with-r choices for girls, it might wear well.

Delphinia – Delphine and Delfina have histories as given names, but Delphinia is far rarer. It comes from the delphinium flower – also known as the larkspur.

Edelweiss – An Alpine flower, rich with symbolism and familiar to all thanks to The Sound of Music, Edelweiss has seen some sparing use in recent years. Bonus? The lullaby comes ready-made!

Eglantine – Eglantine is the name of the little sister owl in the Guardians of Ga’Hoole series, and long before that, Geoffrey Chaucer gave it to a character. The flower is better known as sweetbrier in the US.

Gardenia – An elegant flower, and one that has seen some use as a given name, too. Back in 1953, Nat King Cole crooned the title track to Fritz Lang film “Blue Gardenia,” if you’re looking a name both musical and floral.

Hana – It looks like a slimmed down version of the Biblical Hannah. But Hana actually has separate roots as a Japanese name meaning flower.

Hyacinth – This one instantly brings to mind legendary Britcom Keeping Up Appearances and the snobbish, but loving, Hyacinth Bucket.  (“That’s Bouquet,” she would insist.) Jacinda, Jacinta, and Giacinta are international options.

Iolanthe – Cousin to Yolanda, Iolanthe is sometimes credited to Gilbert and Sullivan.  The duo did create an 1882 operetta by the name – but nearly forty years earlier, Henrik Hertz used it in the drama King Rene’s Daughter. Hertz based his character on the fifteenth century Yolande, Duchess of Lorraine. Tchaikovsky’s 1892 opera Iolanta comes from the Hertz play. They’re all cousins to Violet.

Jessamine – An obscure form of the wildly popular Jasmine, Jessamine feels like a fresh take on Jessica. Jessamy is another possible version.

Jonquil – Related to the daffodil, the flower is usually found in shades of white or yellow, and sometimes the name of a shade of yellow, too. In Game of Thrones, Jonquil is an unseen character, a figure from legend. It’s a lovely, tailored rarity.

Lavender – A Harry Potter character helped give Lavender a boost.

Lilac – A pretty shade of purple, but far less common than Violet, or even Lavender.

Linnea – Linnea comes directly from a botanist.  In this case, it honors Carl Linnaeus.  Also known as the twinflower, it was said to be his personal favorite.

Lotus – The slumber-inducing lotus tree was a thing of myth, but lotus flowers are lovely and plentiful.

Marguerite – It’s been ages since Marguerite cracked the US Top 1000.  It’s the French form of Margaret, but also the French word to refer to a daisy.

Marigold – From the phrase Mary’s gold, probably referring to the Virgin Mary.  It’s rare as a given name, but it could wear well.  There have been a handful of fictional uses, as well as a dozen girls or so born in the US each year in recent years.

Mimosa – It’s a brunch cocktail in the US, and so despite the pretty little flowers, it is tough to imagine this name on a daughter. Then again, Brandy spent over a decade in the Top 100.

Orchid – If Lavender and Lilac are rare, Orchid is nearly unknown.  Some suggest that the literal translation – testicle – is a deal-breaker.

Pansy – Name trivia: Margaret Mitchell originally called her character Pansy, swapping it out for Scarlett just before Gone With the Wind went to press.  Not only is Pansy a slang term meaning wimp, it’s the name of Draco Malfoy’s mean girl friend in the Harry Potter franchise. Still, the flowers are lovely.

Peony – Something about the sound is a little awkward, even though the flowers are pretty. It comes from Paean, in Greek myth – he treated the gods when they were injured.

Petunia – She’s Porky’s girlfriend in Looney Tunes cartoons, and Harry’s dreadful aunt in the tales of the boy wizard. On the plus side?  It would be easily spelled and pronounced.

Primrose – Little sister to Katniss in The Hunger Games trilogy, Primrose is pretty – and brave.

Senna – Rhyming with Jenna and Brenna, senna isn’t the kind of plant that comes to mind, like a rose or a carnation. It has some drawbacks, but on sound alone, it succeeds.

Tansy – If Daisy is mainstream, why not Tansy? The flower is also known as mugwort and considered a weed in many places. I like Tansy best as a fresh nickname for Constance.

Tigerlily, Tiger Lily – Whether smooshed together or written out as Tiger Lily, this comes straight of Peter Pan. In 1996, INXS frontman Michael Hutchence welcomed daughter Heavenly Hiraani Tiger Lily. She wasn’t the first, and others have followed.

Tulip – When Rebecca Romijn and Jerry O’Connell welcomed twin daughters, one received a traditional floral middle, while the other put this one on the list of daring floral names: Dolly Rebecca Rose and Charlie Tamara Tulip.

Viola – It’s the Latin word for violet, as well as a musical instrument, a Shakespearean character, and a vintage favorite.

Wisteria – A flowering vine, and an attractive sound, too – and yet, Wisteria seems like one of the rarest flower names.

Zinnia – With bright colors and that zippy Z, there’s something vibrant and very wearable about Zinnia.