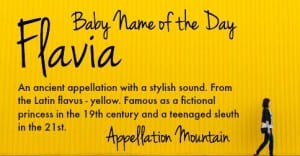 This post was originally published on April 2, 2010. It was substantially revised and reposted on July 20, 2015.

Ready for another ancient appellation that could wear well in the twenty-first century?

Thanks to Christina for suggesting Flavia as our Baby Name of the Day.

Take two parts Ava, add the -ia ending of Sophia and Olivia, and the fashionable F of Finn, Flynn, and Fiona. What do you get? The ancient Flavia.

I’m saying the name flay VEE ah, but there are other possible pronunciations.

Flavia seems fiery, but the name comes from the Roman family name Flavius, derived from flavus – yellow. The first Flavia might have been a blonde.

Most bearers of the name are Italian, with a handful of Spanish and Portuguese uses, too. Anthony Hope’s 1894 bestseller, The Prisoner of Zenda, included a princess with this name.

Set in the fictional country of Ruritania, Zenda is about the aristocratic Rudolf. Rudolf is cousin to the Ruritanian king, who has gone missing. Because Rudolf is dead ringer for his cousin, he agrees to take his place temporarily.

But the king eventually returns, and Rudolf bids adieu to the future queen.

Zenda has inspired sequels, spin-offs, reboots, and adaptations for the movies, television, and theater.

It’s always possible that another reinvention of the tale could put Flavia in the spotlight.

Or maybe it will be a fictional teenager who takes the name center stage.

Writer Alan Bradley created Flavia de Luce, a brilliant eleven year old from an aristocratic English family. The year is 1950. When the first book opens, Flavia is obsessed with potions and poisons, which she explores in a full-equipped laboratory furnished by an ancestor in her family’s crumbling home, Buckshaw. Put it all together, and she becomes an unlikely crime solver.

The Sweetness at the Bottom of the Pie was published in 2010. Since then, Miss de Luce has investigated mysterious deaths in seven novels, from England to Canada. And she’s still not out of high school.

The impressive Miss de Luce may soon be coming to the small screen. Accomplished director Sam Mendes optioned the series. Rumors put the debut in 2015, but since it’s already July, here’s guessing that might be optimistic.

Still, a television series can do wonders for a name. Just look at the Downton Abbey names.

If you’re looking for a wearable rarity, it doesn’t get much better than Flavia.

There have been a few other uses in fiction, and the celebrated author Daphne du Maurier gave the name to her middle child. A 1963 episode of Doctor Who introduced Chancellor Flavia of Gallifrey.

If you’re after a name that feels strong and romantic, something not likely to be shortened, and a name that’s both rare and on-trend, Flavia should be on your shortlist.