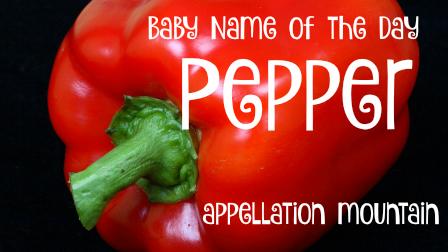 Pepper is a spice, but can it also be a name?

Thanks to Deka for suggesting our Baby Name of the Day.

Pepper is perfectly edible, a name that fits with Olive and Clementine.

The spice takes its name from the Greek peperi, which comes from Sanskrit, or maybe an older language. Peperi became piper in Latin, and eventually the English word we know today.

It’s been applied to the vegetable since at least the 1500s. All spicy foods were assumed to be related, and so the spice and the veggie came to share a name – even though that’s all they have in common. 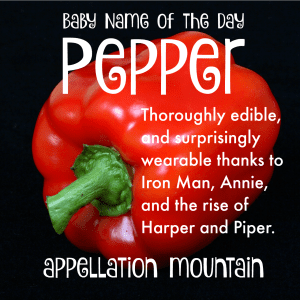 In 1937, five boys were given the name – the first year it registered on Social Security Administration lists.

If you saw 2015’s Little Boy, set during World War II, it included a 7 year old boy by the name, with an older brother called London. Both names are possible, if not likely.

But how did the name get its start? The Five Little Peppers is a children’s book series, first published in 1881. Dr. Pepper, the soft drink, was first served in 1885 – though it isn’t clear how the beverage acquired its name. There are tons of other uses: a professional baseball team in the 1910s, a card game, a 1936 movie with a female character by the name.

By the 1950s, it was in use in small numbers for boys and girls.

Both happen in the current Avengers film series, with Gwyneth Paltrow playing the part.

The comic book character wasn’t enough to convince parents to give the name to their daughters.

The police woman was part of an undercover squad, taking on all sorts of roles to make the arrest.

Leanne, Patricia, and Lisa were all as legal names for the character at different points.

In 1977, there came yet another reason to see this as a possible girl’s name: Annie.

A handful of others have worn the name, including (male) musician Pepper J. Keenan. But this name has been trending female since Police Woman.

It’s tempting to credit a mix of Annie and Iron Man for the name’s success, but I suspect it has more to do with the meteoric rise of Harper and Piper.

Worried that the name is too cute? It could be short for many a longer name, including the ever so stylish Penelope.

Odds are that we’ll hear more of this name in the next few years, though it’s hard to say if Pepper can join Olive in the Top 1000, or if it will stay on the fringes.

What do you think of Pepper? Does it work as a given name, or is it more of a nickname?