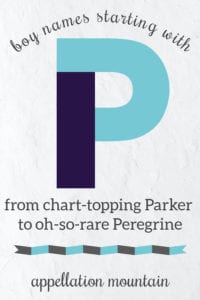 Powerful and playful, baby boy names starting with P range from the most classic of choices to modern favorites – plus everything in between.

It’s an especially good letter for surname names. Sure, there’s Top 100 Parker, and a few other chart-topping favorites. But plenty of boy names starting with P are surnames ready for promotion to given-name status.

Still, ranked just twentieth out of the twenty-six letters of the alphabet, a relatively small number of our sons receive boy names starting with P. Of course, that might be a plus!

The letter is slightly more popular for girls, fueled by favorites like Penelope and Paisley, as well as stylish up-and-comers like Poppy, Phoebe, and Persephone.

Read on for some of the most popular names beginning with P, as well as a few that you might never have considered.

A venerable classic, a name long associated with Ireland, Patrick ought to be every bit as wearable as Charles or James. But nickname Pat feels stuck in an earlier generation. Patrick Star, sidekick to Sponge Bob Square Pants, put some parents off, too. But really, Patrick – especially when used in full – is handsome, strong, and high-energy. It’s a winning choice for a son.

If you love William and Theodore, but want a name that your son won’t share, look no further than classic Peter. From the New Testament’s Saint Peter to Spider-Man, there’s no shortage of prominent figures answering to the name. It’s effortlessly international, too, heard in nearly every European language and recognized far beyond. And easy nickname Pete could easily be a brother for Max or Jack.

Preppy, polished Preston has never left the US Top 1000. But it reached peak popularity around the year 2006, bolstered by a character on Grey’s Anatomy and high profile birth announcements, like Britney Spears’ Sean Preston and Scottie Pippen’s Preston.

The mythological bird rises from its own ashes; that makes Phoenix a richly meaningful choice, associated with resilience and rebirth. It’s also a place name, as in Arizona’s capital. The city was named for the bird, which appears on its official seal and flag.

Names like Axton and Daxton are mostly riffs on Paxton, a surname name derived from an Old English name long since gone extinct: Paecc. It’s tempting to connect it to the Latin pax – peace.

Like Peter and Patrick, Paul belongs with classic boy names starting with P. A towering New Testament figure, there’s also Paul Revere, Paul McCartney, artists Gaugin and Cezanne, and actors Newman and Walker. It’s hard to believe that such a traditional favorite remains outside of the Top 200 – but that could be a perfect opportunity.

Prince might feel like a bold title name, in the key of King. Or maybe it shares the rock star swagger of the late recording artist Prince. And, of course, for some families, it might be a religious reference, too. What’s certain is that Prince has a long history of use, and is more popular than ever today.

The Spanish form of Paul, with a lively o ending.

As Pablo is to Paul, Pedro is to Peter.

An occupational surname name, Porters carried things – mostly luggage – in hotels and the like. But before that, a Porter was a gatekeeper, either for a walled city or a grand castle. The latter is an appealing image, elevating it from a capable, straightforward working man’s name to a subtle virtue one.

Traditional boy names starting with P include Paul and Patrick and Peter, but also Philip. The double-L spelling was more popular in the mid-twentieth century; Philip before that. Now it’s Philip-with-one-L on top again, but not by much.

A surname name made famous for boys by NFL quarterback Peyton Manning, this name remains more popular for our daughters – but still undeniably unisex. Payton is another spelling option, though not currently in the boys’ Top 1000.

Take Prince, add in an Ivy League education, and you’ll have Princeton. It’s a place name, one associated with the New Jersey town that’s home to the storied university. But Princetons – prince’s town – appear on the map across the English-speaking world.

The double-L spelling, currently just a little less popular than the single-L version.

A surname name, Palmer literally comes from the word for palm tree. But it refers to one who went on a religious pilgrimage to the Holy Land, returning with a palm branch. It also recalls hands folded in prayer. Despite this spiritual association, Palmer likely appears to parents for the same reasons as other R-ending surnames, like Thatcher and Carter.

It sounds like a name for a fleet-footed child. But Pace started out as a surname, either derived from the Latin word for peace, or for the given name Pascal, referring to Easter.

A surname name related to Page, someone with the surname Padgett was likely a servant – back in the day. Today, Padgett feels like a possibility in the key of Everett, Beckett, and Bennett.

A surname name related to Patrick, Patterson could fit right in with Harrison, Jackson, and so many other ends-with-son surname names.

Like Patterson, Patton comes from Patrick. But it also brings to mind storied World War II commander General George S. Patton. While not without controversy in his day, he’s become something of a modern folk hero.

A familiar surname, Pendleton is rarely heard as a first. It comes from the name of a hill – Pendle. Lots of other places have been named Pendleton, including one in Oregon, now quite famous for their blankets. Maybe it’s an odd choice for a child’s name, except Penn makes a perfect short form.

Like Phoenix, Pheiffer starts with a F sound. In German, Pheif means pipe, making this name the equivalent of Piper, a favorite for our daughters. But the sound is different enough that Pfeiffer seems like a possibility for a son, too.

Powell and Howell are cousins, both derived from Hywel, meaning eminent, and the name of a tenth century Welsh king.

A surname name probably completely unrelated to the word power, it still feels, well, strong. The late actor Powers Booth, of 24 and Deadwood fame, is one notable bearer.

Originally short for apprentice, and sometimes spelled Prentis or Prentiss, too.

Prescott started out as a place name. Probably because it includes familiar given name Scott, it feels like a polished, buttoned-up surname name option for a son.

A very common surname, Price is another Welsh import. It means “son of Rhys.” And while Price brings to mind accounting and sales by today’s standards, it originally meant value or worth.

Sound-wise, it’s somewhere between Parker and Briar. In Latin, it means superior. (Think priority.) In practice, we use “prior” to mean earlier … or to refer to a monastic official. (Think priory.)

The name refers to the Easter feast, ultimately from the Hebrew Pesach – Passover. While the name has a long history of use, it’s more common outside of English. Other variations include the Italian Pasquale and Cornish Pasco.

Payton meets Jason. Though as a surname, it may also mean “son of Paul.”

An abbreviation for Pennsylvania, it comes from founder William Penn. It’s the given name of actor Penn Badgley, and a promising alternative to Finn.

In medieval legend, Percival was a Knight of the Round Table, serving under King Arthur. Percival sounds medieval and romantic, and maybe a little hard to wear for a child born today. But accessible nicknames like Perry and Percy might help.

Percy sounds British and buttoned-up, but cool and surprising, too. Maybe it’s poet Percy Bysshe Shelley that gets credit for the name’s range, or maybe it’s a long line of children’s storybook characters, from Thomas the Tank Engine to Harry Potter to, of course, Percy Jackson.

It might come from the Welsh phrase ap Herry – son of Henry. That makes Perry an intriguing substitute for that classic name. Another possible meaning: pear tree. A Top 1000 staple into the early 2000s in the US, could the HBO reboot of detective series Perry Mason reverse the name’s slide?

Peregrine could qualify as a modern nature name, thanks to the peregrine falcon. But it’s also a name of two early Christian martyrs. It means, roughly, traveller. And, with so many boys answering to elaborate names like Sebastian, Peregrine feels more accessible than ever.

A mythological figure, Perseus slayed Medusa and rescued Andromeda. And, of course, it’s the given name of Percy Jackson, the fictional demigod starring in Rick Riordan’s long-running YA series. With a Disney+ series based on the books due in 2024, Percy and Perseus (and maybe Annabeth and Grover, too) might get a lift.

From the Greek philon, meaning friend. American inventor Philo Farnsworth is credited with inventing the television.

You might expect Phineas to be among the most popular boy names starting with P. It shortens to accessible nickname Finn. We love long-running Disney Channel series Phineas and Ferb, about a pair of likable stepbrothers who create amazing inventions in their suburban backyard. But it’s never cracked the US Top 1000.

The French form of Peter.

The medieval form of Peter, Piers gave rise to Pierce – but we’ve completely overlooked the original.

The name of several early saints, Porfirio isn’t super easy to wear in English. But it remains in use in romance languages.

Primo means first, and sometimes is used as shorthand for excellent. But it’s a traditional name, particularly in Italian.

To prosper is to be fortunate. We all recognize Prospero from Shakespeare’s The Tempest. Prosper has some use in English, a sort of virtue name. And fans of Star Trek probably have thoughts about this one. But there’s something about it that feels quite appealing in our age of word names.

What are your favorite boy names starting with P? 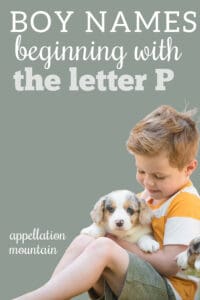