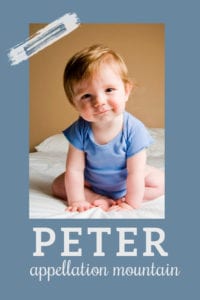 The baby name Peter counts as a classic, from saintly origins to favorite children’s stories.

The first Saint Peter was a fisherman turned apostle.

Born Simon, Jesus nicknamed him rock – petros. The Roman Catholic church considers him the leader who picked up the pieces after Jesus’ crucifixion, the very first Pope. Head to the Vatican, and you can wander through the cavernous, football-field-dwarfing St. Peter’s Basilica, named in his honor.

The name has been used in commemoration of the saint ever since, with versions in nearly every European languages. Other saints followed.

There’s no shortage of notables across history and fiction:

Athletes, politicians – including recent presidential hopeful “Mayor” Pete Buttiegeg, and many others belong on this list, too.

But somehow, the baby name Peter really shines in fiction.

Nursery rhyme names favor the most traditional choices. Jack appears in more than one; there’s Simon and George, too.

We know Peter as the pumpkin eater, first published around 1825, but recorded some years earlier. He “had a wife and couldn’t keep her.” It sounds nonsensical, but I’ve heard that it refers to a husband murdering his unfaithful wife.

A little dark – but also obscure.

Beatrix Potter created Peter Rabbit in 1902. He featured in more stories through 1912, and has been wildly popular ever since. He’s clever and fearless, but also disobedient and a bit of a risk-taker. Many an adaptation has followed over the years, including a pair of computer-animated movies, the first in 2018, and the second expected later in 2020.

Potter’s creation isn’t the only rabbit by the name. Thornton Burgess gave us Peter Cottontail, who hopped down the bunny trail in a memorable 1971 Easter special.

In 1936, Russian composer Sergei Prokofiev wrote Peter and the Wolf, the story and the music. It introduces children to instruments, with each representing a character. The duck is an oboe; the flute, a bird.

The symphonic fairy tale debuted in the US in 1938. It’s among the most frequently performed pieces of all time.

And then there’s Peter Pan.

JM Barrie’s enduring tale of a boy who would never grow up has been re-told and re-invented again and again over the years. Disney gave us an enduring version – complete with his green tunic and cartoon-ish adversary, Captain Hook.

The Lost Boys of Neverland continue to capture our imagination, well over a century after we first met them. (Remember this song from 2015?)

The most famous Peter of the moment, though?

Has to be Spider-Man.

While other people have worn the suit in the Spiderverse – Miles Morales and Gwen Stacy to name two – Peter Parker is the original, and the current member of the Avengers seen on the silver screen since 2016.

If you have your heart set on classic names for boys, but find William and James, Henry and Theodore are all already taken, Peter could be the perfect choice. Traditional and storied, playful and heroic.

Chances are long-time this long-time Top 100 favorite is just waiting for a comeback.

What do you think of the baby name Peter? Would you consider it for a son?